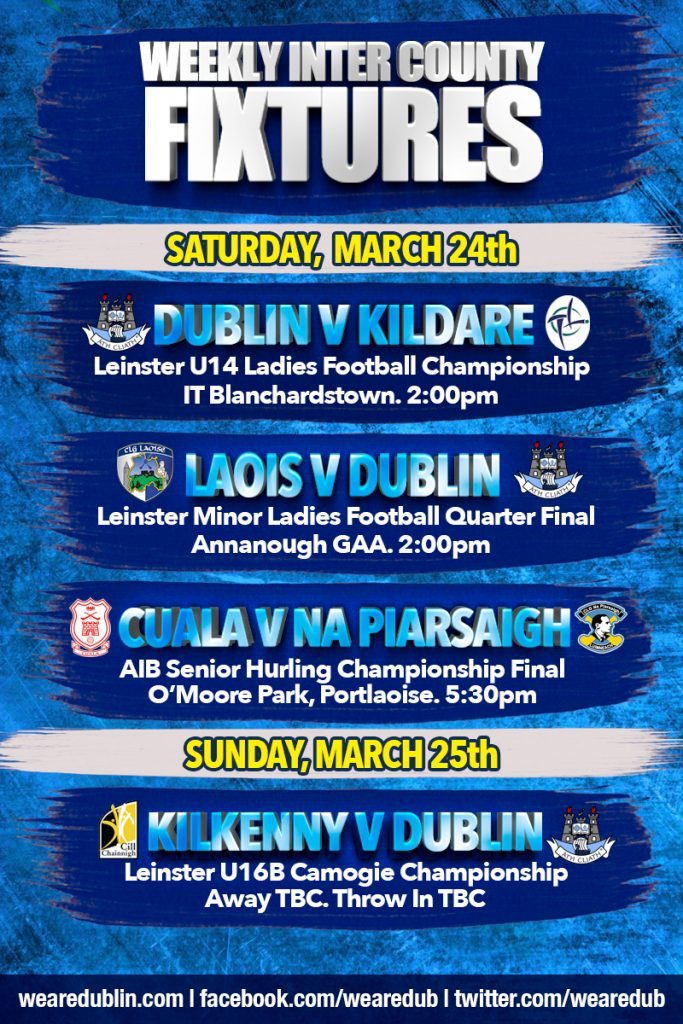 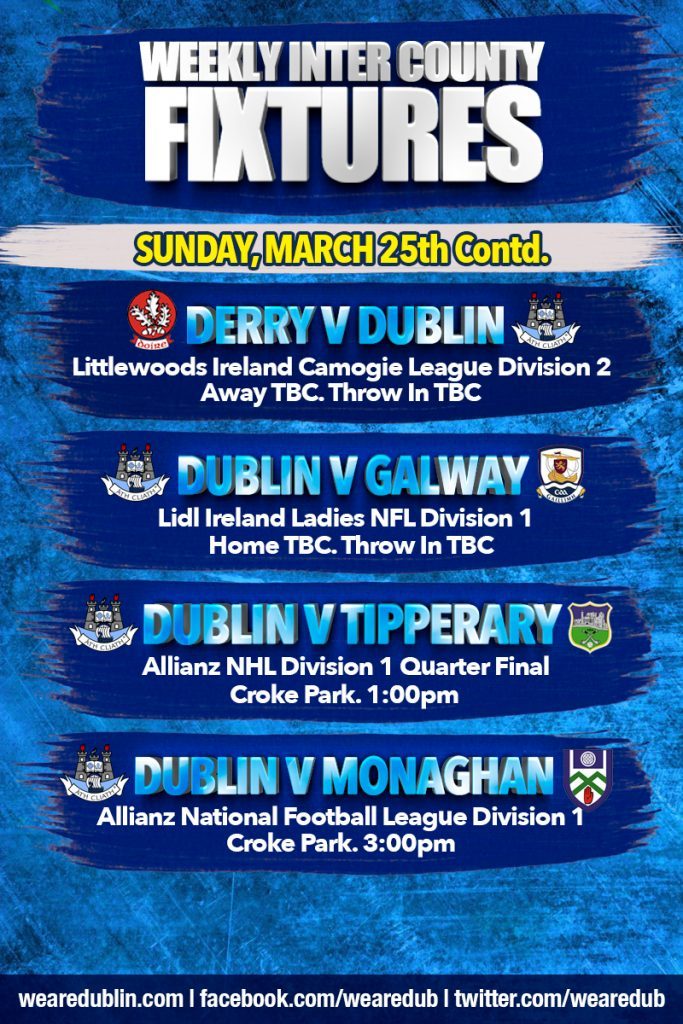 Well the snow appears to have gone away for another while and hopefully that means we can have an uninterrupted weekend of games across all the codes. So here’s what’s in store this weekend.

Three games on Saturday, starting with Dublin’s U14 Ladies Football Panel. With the start of their Leinster campaign put on hold a few weeks ago they can finally get up and running as they face Kildare in IT Blanchardstown at 2:00pm

At the same time in Annanough GAA in Stradbally, the Ladies Minor Football Panel take on Laois in their rescheduled Leinster Quarter Final. The game was expected to be played last Sunday but was called off.

After an amazing contest in the AIB Senior Hurling Final on St. Patrick’s Day, Cuala and Na Piarsaigh will go at it all over again in O’Moore Park, Portlaoise, to decide this year’s Championship winners. Throw in is down for 5:30pm.

Sunday is a rather packed day with five games to take in.

Dublin’s U16B Camogie squad will hit the road to Kilkenny for their Leinster Championship Round 2 game. The girls beat Meath quite convincingly in Round 1 and will hope to keep that momentum going. Venue and throw in time are still to be confirmed and we’ll let you know as soon they’ve been decided.
Also on the road are Dublin’s Premier Junior Panel as they continue their Littlewoods Ireland League Division 2 campaign with a trip up North to face Derry. Venue and throw in time also yet to be confirmed.

The Dublin Senior Ladies Footballers are back in Lidl National League action as they welcome Galway to the capital. Mick Bohan’s side are four for four so far and will be hoping to build on that in the second half of this year’s round stages. Galway have 7 points from the possible 12 so far and will need to pick up a result to keep them in with a chance in the knockouts. The venue and throw in time for this are, again still to be confirmed.

Finally, as the Allianz Hurling League Fixtures were all put paid to at the weekend, we have a impromptu Double Header to finish off the Dublin Spring Series in Croke Park.

Pat Gilroy’s Senior Hurling Panel will get their opportunity to face off against Tipperary in the League Quarter Final at 1:00pm with a Semi Final place at stake against Limerick.

Then it’s the turn of the Dublin Senior Footballers. After a tough contest against Galway in Salthill at the weekend, the boys in blue have qualified for the League Final, but still need to pay their final round game against Monaghan. Throw in for this game is 3:00pm.
Well there you have it. A massive weekend. Eight games over two days. Take your pick, but get out and support the boys and girls in blue.