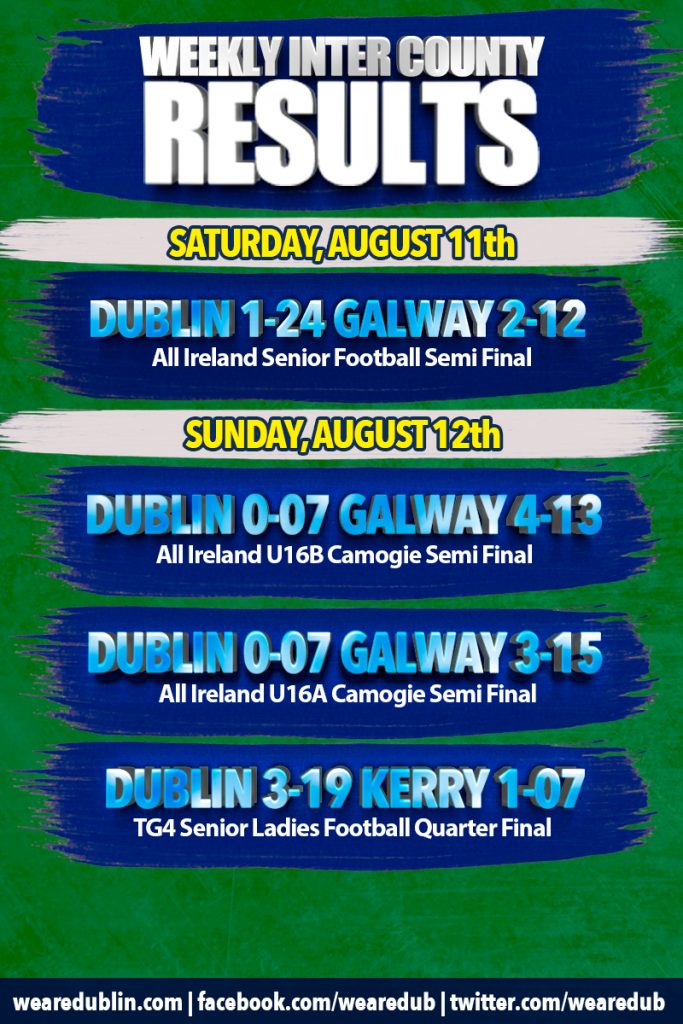 Another week over, and not too many left in the Inter County Calendar for this year. Nevertheless we’re making the most of the fixtures that are still happening. And of course we’ve more to celebrate again this week. So let’s get you the results from yesterday and today.

Jim Gavin’s Dublin Senior Football Panel have once again booked their place in the All Ireland Final, their sixth final this decade! Galway came to Croke Park to face the boys in blue for the third time this year. But the stakes were much higher. And Dublin did what Dublin do. After a close first 35 minutes the Dubs shifted gear and dominated the second half to leave 0-09 between the sides at full time. Con O’Callaghan scored 1-03, with Dean Rock, Paul Mannion, Ciaran Kilkenny and Cormac Costello scoring the line share of Dublin’s 24 points. The team will now face Tyrone in this year’s All Ireland Final on September 2nd at 3:30pm

A bad day at the office for both Dublin’s U16 panels in this year’s All Ireland. The U16B were knocked out in their Semi Final by Galway on a score of 0-07 to 4-13. And things didn’t go much better for the U16A panel who lost 0-07 to 3-15 in their semi final against Galway. So that’s the end of the camogie season for the Dublin U16’s this year. Well done to both teams for reaching the Semi Finals. Here’s to 2019 and a fresh start.

Job done this evening in Dr. Hyde Park for Mick Bohan’s Dublin senior football panel, who beat Kerry with a very accomplished second half performance finishing 3-19 to 1-07 the better. In the first game of the day Galway beat Mayo 5-11 to 0-12, meaning they’ll be Dublin’s opponents on August 25th in the championship Semi Final.

Sinead Aherne, Niamh McEvoy and Hannah O’Neill all found the net for Dublin today with Aherne being awarded the player of the match with her 1-07 tally. Once a venue is confirmed for the Semi Finals, we’ll make sure to let you know.

And that’s it for this week. Stay tuned to www.wearedublin.com from tomorrow when we’ll have information on next week’s games and more post match fall out from this weekend.

﻿DUBLIN’S AOIFE BUGLER AND AISLING MAHER AMONG THE WINNERS AT THE...