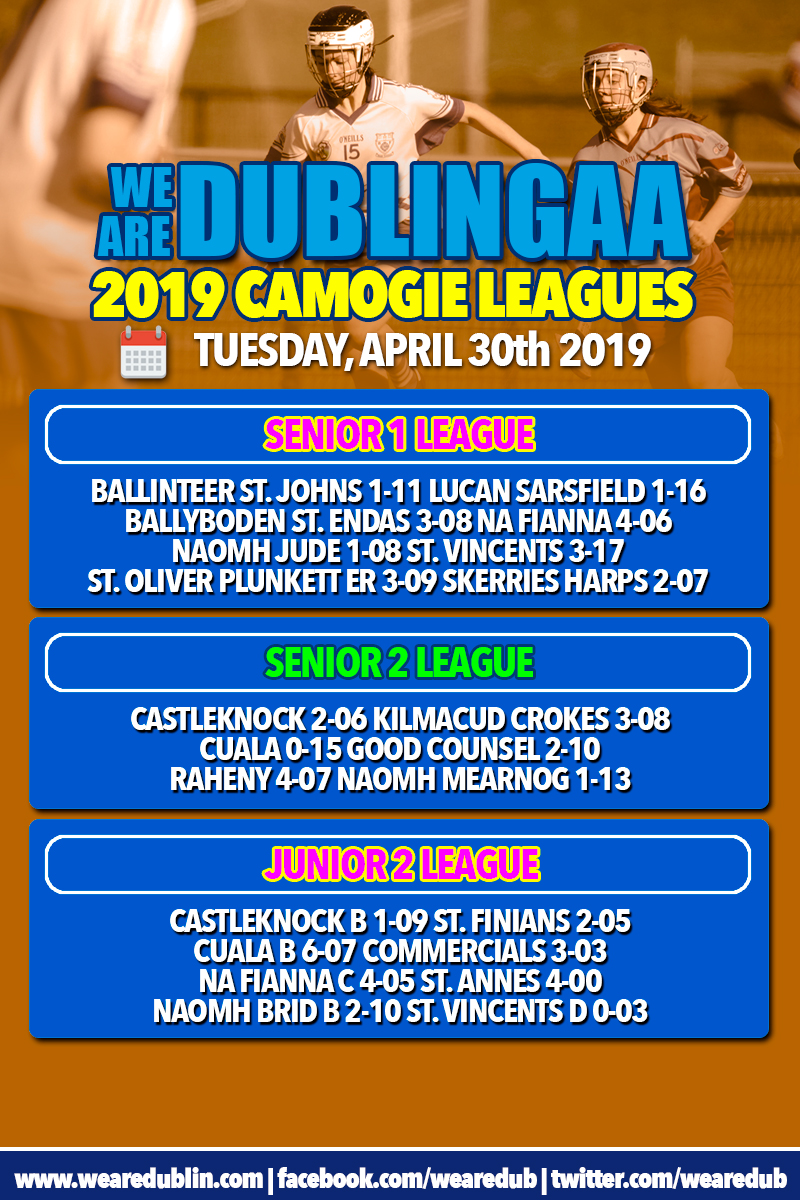 Plenty to talk about tonight in the We Are Dublin GAA Senior Camogie League. St. Vincents and Na Fianna record their fifth consecutive wins to stay ahead of pack in Senior 1. Good Counsel remain unbeaten in Senior 2. Naomh Brid and Castleknock are neck and neck in Junior 2, five teams are in the hunt for Junior 3 glory, and Lucan and Ballinteer a speeding ahead before the last round in Junior 4.

With only three rounds to go in Senior 1, Na Fianna and St. Vincents remain unbeaten after tonight’s games. Vincents were comfortable winners over Naomh Jude on a 3-17 to 1-08 final score. They head to St. Oliver Plunkett Eoghan Ruadh next week for Round 7 and will be feeling confident. One point seperated Na Fianna and Ballyboden tonight, but it was enough to keep Na Fianna’s 100% record. A 4-06 to 3-08 score at the final whistle was as close as you could get. Next week Ballyboden head to Lucan Sarsfields, who enjoyed their third win tonight, beating Ballinteer St. Johns. Na Fianna’s opponents will be Naomh Jude at Mobhi Road.

In what was described by referee Gerry McGough as a brilliant match, Good Counsel maintained their unbeaten run, but only just. With Cuala running them close the game finished on a 2-10 to 0-15 scoreline. With two rounds to go Counsel head to Raheny next week four points clear of the pack. Raheny got their second win in the competition tonight, beating Naomh Mearnog 4-07 to 1-13. Mearnogs, still waiting on a win, play their final game against Castleknock in two weeks time, with next week being their bye.

Kilmacud Crokes keep the pressure on with their third win tonight. They were victorious over Castleknock on a 3-08 to 2-06 score, and they head to St. Vincents B next week, with Castleknock facing Cuala.

With three rounds to go, there is literally two points between six teams in this league, so everything to play for. Castleknock B finished tonight on six points with a 1-09 to 2-05 win over St. Finians. Naomh Brid beat St. Vincents D convincingly by 2-10 to 0-03 to stay at the top with Castleknock. Cuala B consigned Commercials to their fourth defeat of the league by 6-07 to 3-03. Five points seperated Na Fianna C and St. Annes tonight, with eight goals scored in the 4-05 to 4-00 win for Na Fianna.

Castleknock and Naomh Brid go head to head next week in a top of the table clash. Vincents head to Commercials. Cuala and Na Fianna square off, while St. Finians face St. Annes. 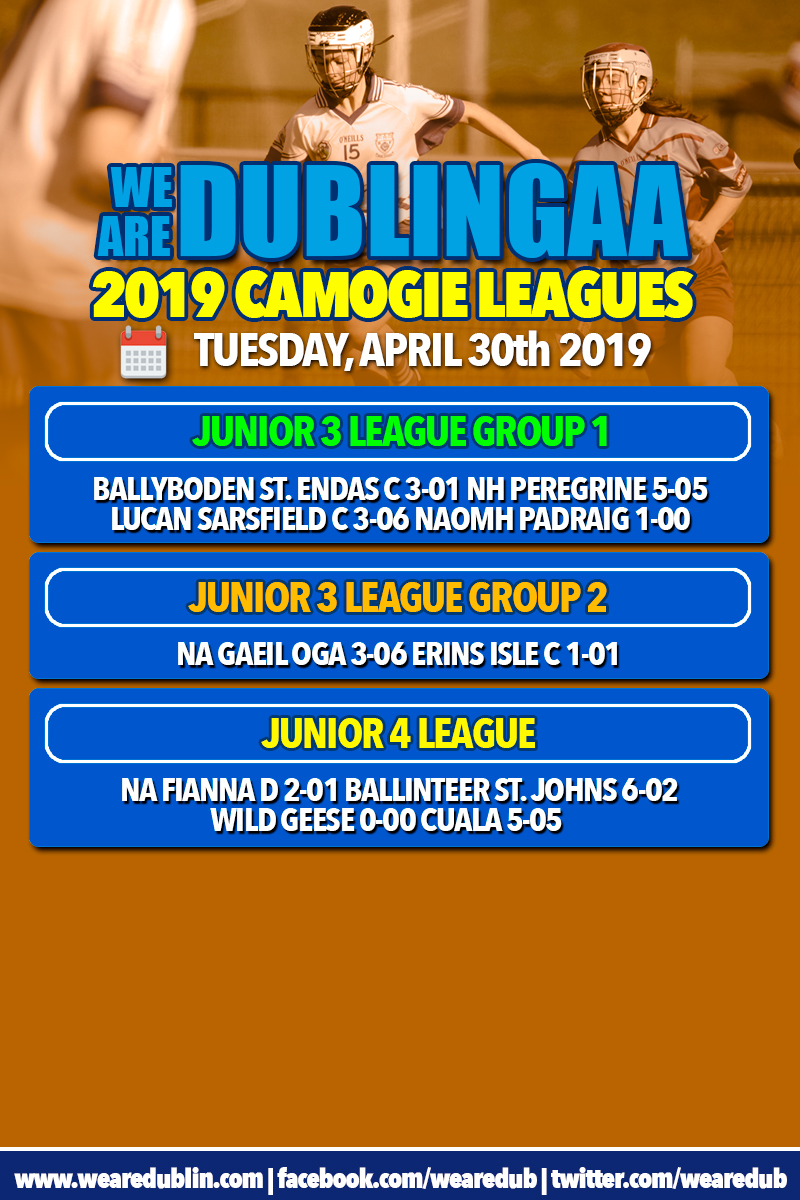 With next week being the final round in Junior 3, leaders Naomh Peregrine and Lucan Sarsfield C will square off to see who finishes top of the table. Lucan were 3-06 to 1-00 winners in their game tonight against Naomh Padraig. Peregrines beat Ballyboden C by 5-05 to 3-01. Boden go to Round Towers Clondalkin next week to finish their campaign.

About as clear cut as Group 1, Faughs/Celtic C, Kilmacud Crokes C and Na Gaeil Oga shared the top positions on sic points each. Na Gaeil Oga were 3-06 to 1-01 victors tonight over Erins Isle C. And the game between Setanta and Faughs will take place tomorrow.

Next week will see leaders Lucan Sarsfield D and Ballinteer St. Johns go head to head to decide the top spot. With Lucan on a bye this week, Ballinteer capitalised, beating Na Fianna C 6-02 to 2-01 to draw level on points. Cuala were 5-05 to 0-00 winners over Wild Geese. The girls from Dalkey will face Na Fianna C in the final round next week.

Cork On The Double For Dublin Camogie U16 Squads