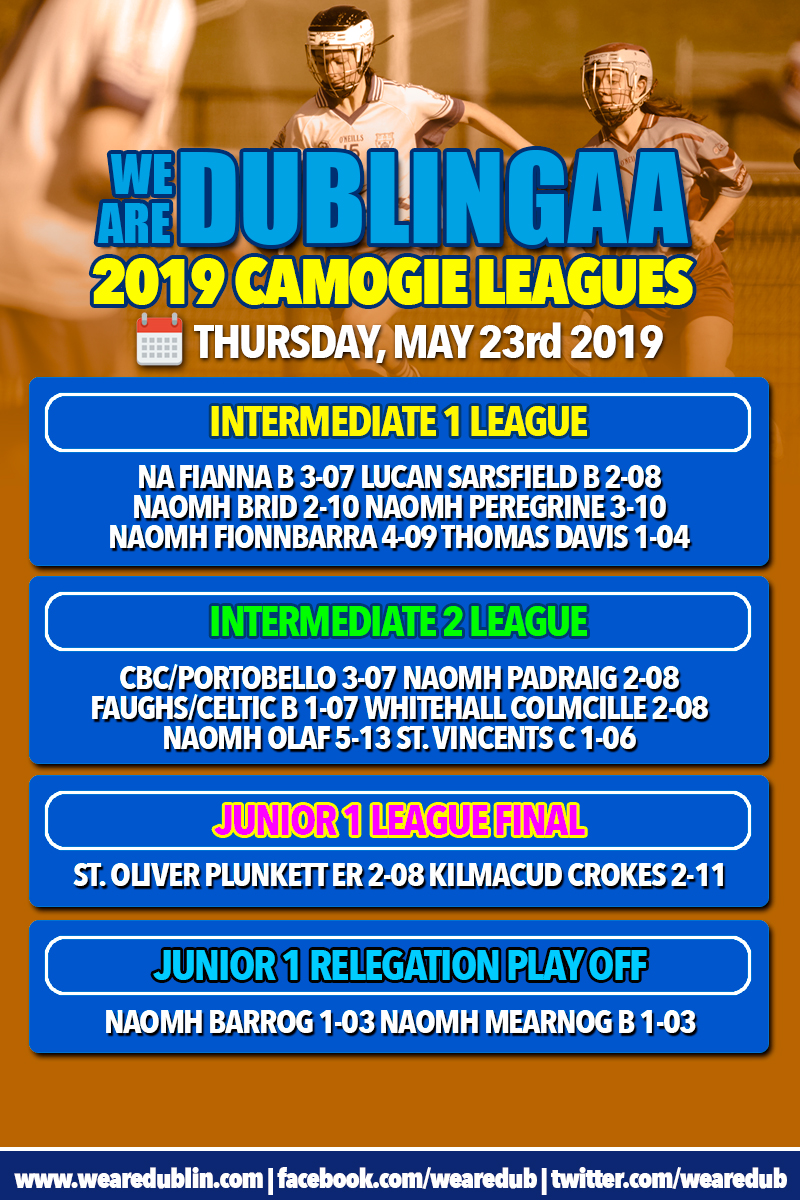 Another night checked off in this year’s We Are Dublin GAA Senior Camogie League and more competitions come to an end. The Inter 1 and Inter 2 League come to a close. We crown the Junior 1 Champions and we have a stalemate in the Junior 1 Relegation Playoff.

After a couple of false starts, Na Fianna ended their league campaign tonight on a high. After a hard fought battle with Lucan Sarsfield, the girl from Mobhi Road finished 3-07 to 2-08 winners. That puts them in a very respectable third position. Naomh Peregrine ended level on points as expected with Champions Erins Isle but with a much lower score difference. A goal seperated them and Naomh Bríd tonight at full time. And Naomh Fionnbarra picked a win on the last day to lift them off the bottom of the table and away from relegation. They beat Thomas Davis by 4-09 to 1-04.

Despite losing to CBC/Portobello tonight by 2-07 to 2-08, Naomh Padraig still take the Inter 2 League title on score difference. So massive congratulations to Pats on a great league campaign. Whitehall Colmcille got a vital 2 points tonight, beating Faughs/Celtic B on a 2-08 to 1-07 scoreline. That means Whitehall are away from the drop and safe. And with Naomh Olaf beating St. Vincents C tonight by 5-13 to 1-06, it looks like Vincents will be relegated on score difference to the Junior 1 League next year.

Massive congratulations to Kilmacud Crokes B who tonight claimed the Junior 1 League title, beating St. Oliver Plunkett Eoghan Ruadh B by 2-11 to 2-08. Crokes were unbeaten right through the competition and continued that run of form tonight in a close game. Commiserations to Plunkett how put in a huge fight and best of luck to both teams in the upcoming championship.

As if doing it once was hard enough for Naomh Barrog and Naomh Mearnog, tonight’s relegation playoff ended in a 1-03 a piece tie break. And that mean they’ll have to do it all over again to decide the team to take to drop to Junior 2. With girls on either side looking at exams soon, this game will be rescheduled at a more suitable date and time.