St. Vincents are Senior 1 Champions in the 2019 We Are Dublin GAA Senior Camogie League 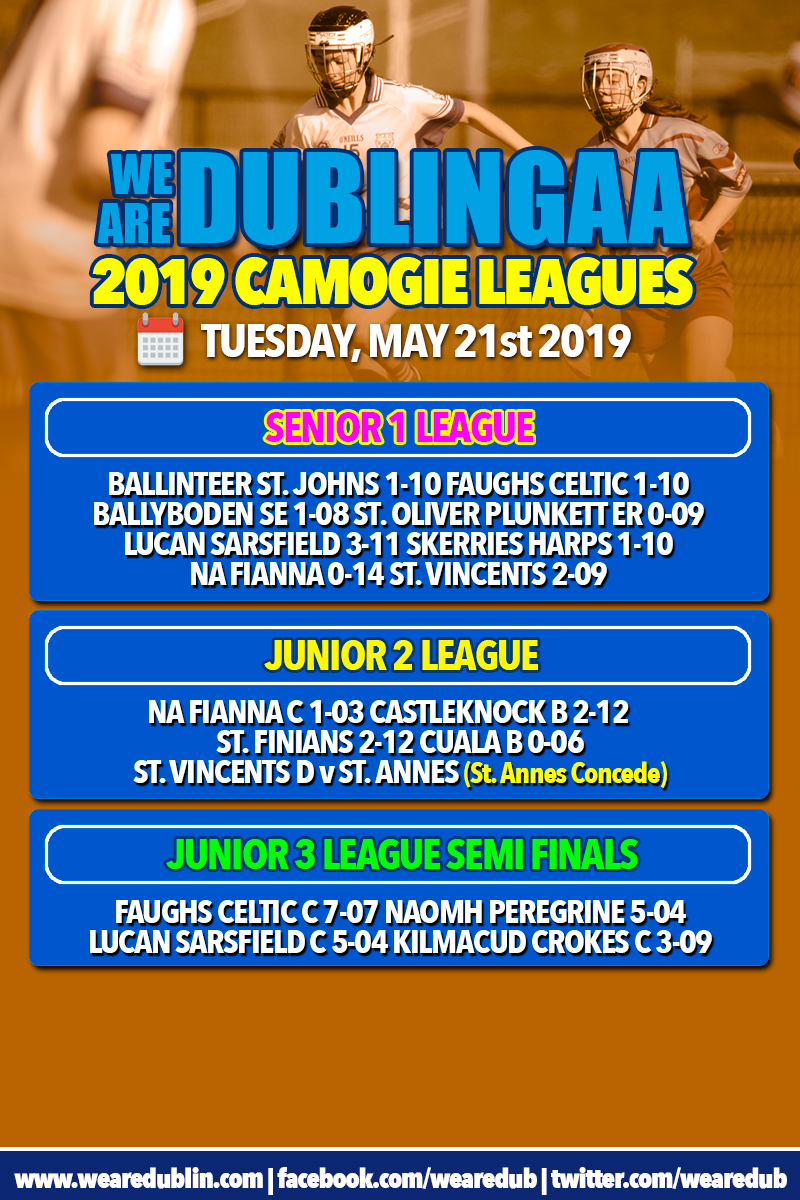 You’d expect the final Round of the Senior 1 Camogie League to be exhilarating. And tonight the Senior 1 decider between Na Fianna and St. Vincents was on a knife edge. With nothing to seperate them right through the competition, only a single score seperated them at the final whistle. But we’ve more action to fill you on so let’s get into it.

Through nine rounds, beginning at the end of March, the Senior League has produced some amazing performances. And in a nail biting completion tonight St. Vincents secured the title, beating Na Fianna on a 2-09 to 0-14 scoreline. It’s a tribute to both sides who have ran unbeaten up to this point, but sadly one of them had to lose. Congratulations to Vincent’s on a very deserving win.

Despite losing to Ballyboden St. Endas tonight, St Oliver Plunkett Eoghan Ruadh enjoyed a good League campaign, and they’ve still a back fixture to play against Naomh Jude to complete their rounds. Faughs/Celtic and Ballinteer St. Johns played out a 1-10 a piece draw tonight which lifts Faughs away from the bottom of the table.

And finally Lucan Sarsfield finished their League campaign with a 3-11 to 1-10 win over Skerries Harps. That puts Lucan in third position, but Plunketts can still reclaim that spot should they beat Naomh Jude in their remaining back fixture.

Already champions, Castleknock B registered another win tonight in their 2-12 to 1-03 victory over Na Fianna C. They have one more game to play against Cuala B next week in a rescheduled Round 3 fixture. Cuala were beaten in their game tonight against St. Finians on a 2-12 to 0-06 scoreline. And with St. Annes conceding to St. Vincents D that’s all the action from Junior 2.

This year’s Junior 3 League Final pairing has now been decided. Faughs/Celtic C, who were Group 2 winners beat Group 1 runners up Naomh Peregrine tonight. In a high scoring 7-07 yo 5-04 Faughs get the win to advance. Their opponents will be Lucan Sarsfield C who had  a much closer encounter with Kilmacud Crokes C tonight. Only one point seperated them at the final whistle with the score 5-04 to 3-09 in Lucan’s Favour.

Best of Luck to both sides in the Final