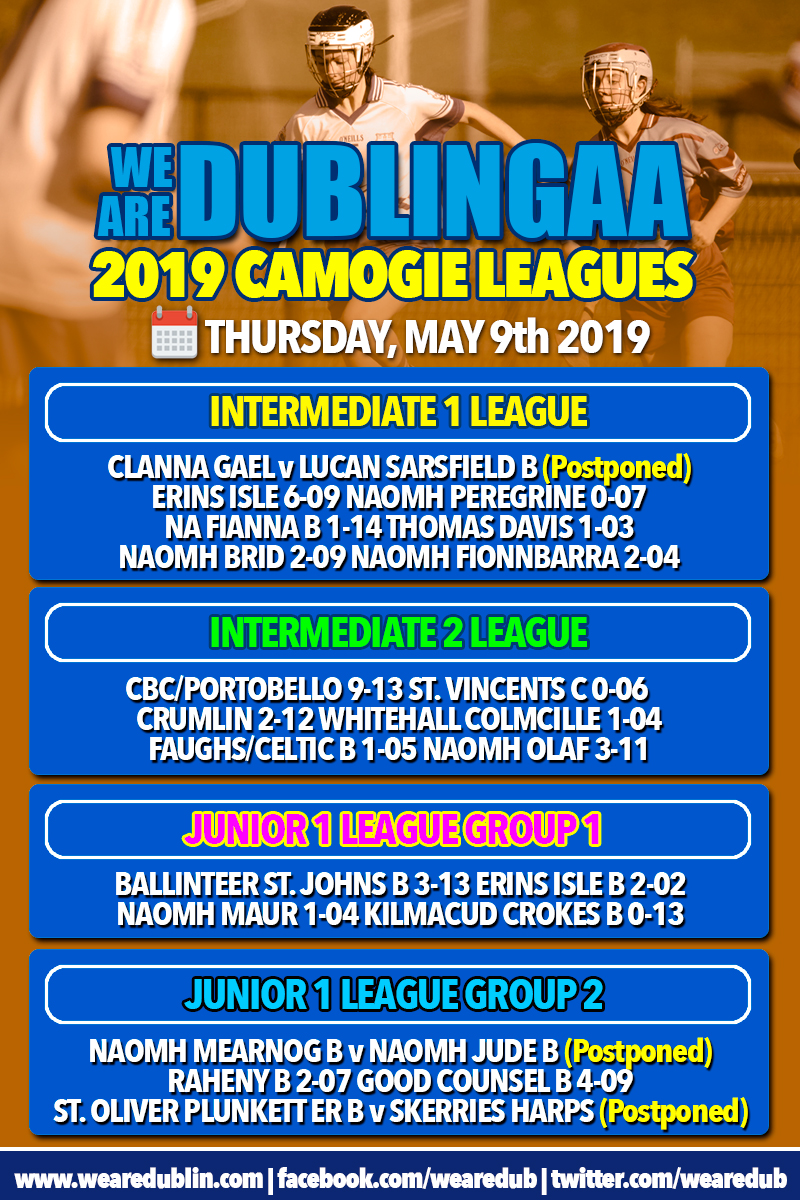 Earlier this afternoon we thought we might be looking at a mass of games postponed due to the weather in tonight’s We Are Dublin GAA Senior Camogie League. But the when the rain finally cleared the majority of the pitches held up and the action got underway. only three games fell foul, but they’ll rescheduled. So tonight we had action from both the Inter 1 and Inter 2 leagues, and both groups in the Junior 1 competition.

The top of the table clash between Erins Isle and Naomh Peregrine went ahead, and by all accounts didn’t disappoint. Erins Isle continue their unbeaten run and sit about Naomh Peregrine on 12 League points. With two more rounds to go, facing Lucan and Ballyboden they’ve put themselves in a very solid position. Na Fianna B are still closing the gap to the top with a fourth consecutive win. Tonight they consigned Thomas Davis to another defeat on a 1-14 to 1-03 scoreline. Naomh Brid also creep up the table with their 2-09 to 2-04 victory over Naomh Fionnbarra.

Only one game suffered from the weather and that was the clash between Clanna Gael/Fontenoy and Lucan Sarsfield B. The game will now be rescheduled.

Crumlin and CBC/Portobello both capitalised on Naomh Padraig’s bye week, claiming wins and going level on points at the top of the table. Crumlin served Whitehall Colmcille their fourth straight win by 2-12 to 1-04. CBC/Portobello did their score difference a huge favour in their 9-13 to 0-06 win over St. Vincents C.

Naomh Olaf registered their first win in the competition, beating Faughs/Celtic B by 3-11 to 1-05. The game of the round next week will be Crumlin v CBC/Portobello.

Kilmacud Crokes finished their final round of the league unbeaten, having already secured the top spot in Group 1. Tonight they beat Naomh Maur by 0-13 to 1-04. And in the battle for the second qualifying slot, Ballinteer St. John’s were victors over Erins Isle B on a 3-13 to 2-02.

With only one game taking place tonight due to the weather, Raheny B, who were unbeaten to date, lost their final game to Good Counsel B. Counsel were 4-09 to 2-07 winners this evening. And while it might not help their cause, it does leave Raheny waiting until the game between St. Oliver Plunkett Eoghan Ruadh B and Skerries Harps is played.

If Plunkett’s win by more than 6 points, they’ll leapfrog Raheny into the top spot. If Skerries win, unless it’s by a massive margin, Raheny will finish top.