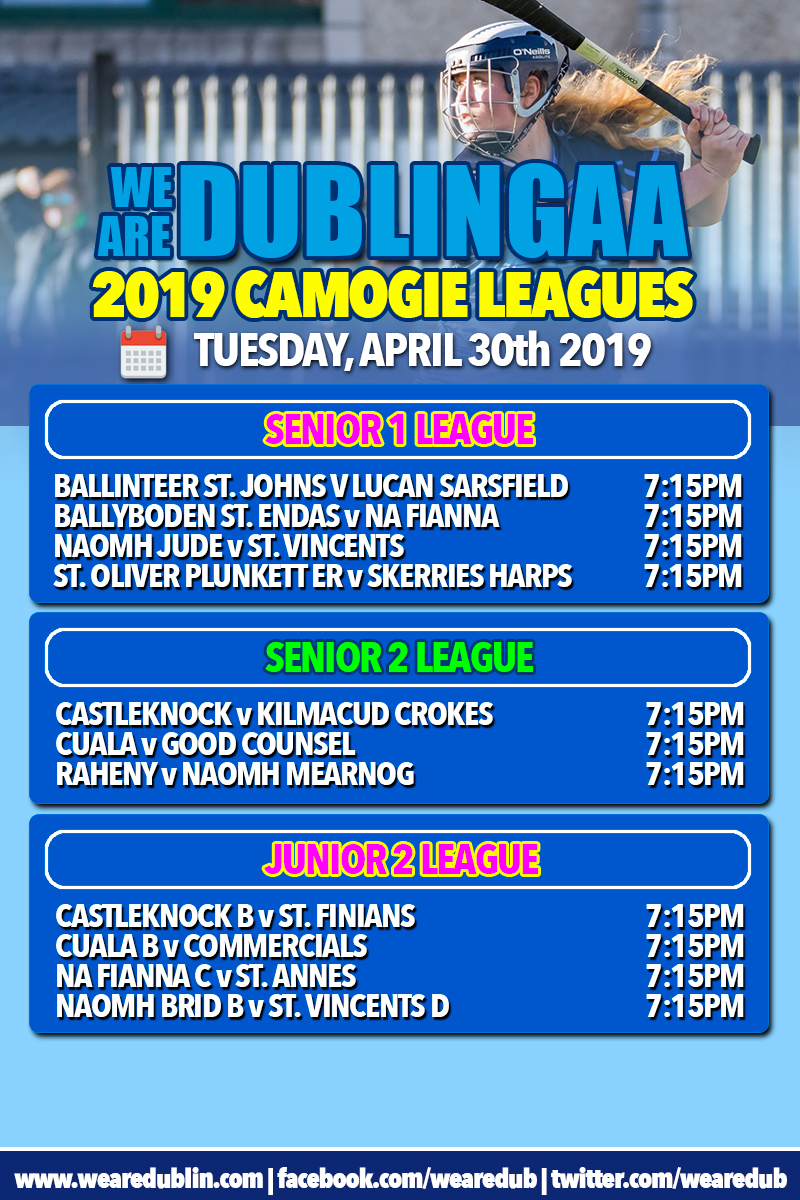 We’re already at Round 6 of the Senior 1 League and Round 5 in Senior 2 in this year’s Senior Camogie League. We literally won’t be long now until we’re crowning this year’s league championship across all Senior, Inter and Junior competitions.

With Na Fianna making ground on Vincents at the top of the table, Ballyboden have the opportunity to catch the pack as they go head to head with the girls from Mobhi Road tomorrow night. Vincents head to Naomh Jude with Judes looking to bounce back following their defeat last week to Ballyboden. There’s only a point seperating Ballinteer St. John’s and Lucan Sarsfield as they square off in their Round 6 encounter. And after beating Ballinteer last week, St. Oliver Plunkett Eoghan Ruadh will be in search of their third win when they take on Skerries Harps.

Good Counsel still hold the high cards in Senior 2 with a four point advantage over their opponents Cuala tomorrow night. But Cuala come off their bye following a 2-13 to 3-08 victory over Naomh Mearnog in Round 3. Mearnog can earn some valuable points should they beat Raheny tomorrow night. The girls from Raheny also lost their Round 4 game with a heavy defeat from Kilmacud Crokes. Crokes face Castleknock tomorrow with both sides on 4 points. So there are three teams looking to make up ground on Good Counsel.

Naomh Brid B, Castleknock B, St. Annes and St. Vincents D all sit on four points in the Junior 2 table. Something will give way though tomorrow as Naomh Brid and St. Vincents face each other. Elsewhere, Castleknock will entertain St. Finians, who lost to Vincents in the last round. Cuala can steer themselves towards to leader if they can get a win over Commercials. And St. Annes will face Na Fianna C to finish off the round.

With Naomh Peregrine and Lucan Sarsfield avoiding each other until the final round, they go seperate ways and could still be on equal points after tomorrow night. Peregrines go Ballyboden St. Endas, who are only two points behind. And Lucan will take on Naomh Padraig. Naomh Padraig have yet to register a win in the competition.

Na Gaeil Oga have the opportunity to go level on points with Faughs/Celtic C and Kilmacud Crokes C tomorrow if they can beat Erins Isle C in their Round 4 clash. Faughs go to Setanta, but not until Wednesday in a rescheduled game. Crokes are on a night off on account of Naomh Barrog no longer being in the competition.

With Lucan Sarsfield D on a bye week, Ballinteer St. John’s have the chance to draw level with them at the top of the table. Tomorrow they face Na Fianna D who could also do with the league points. Neither Wild Geese or Cuala have secured a win yet on the league, but facing each other tomorrow night could change that.

Class Act As Under 16B Camogie Panel Wipe Out Westmeath in...