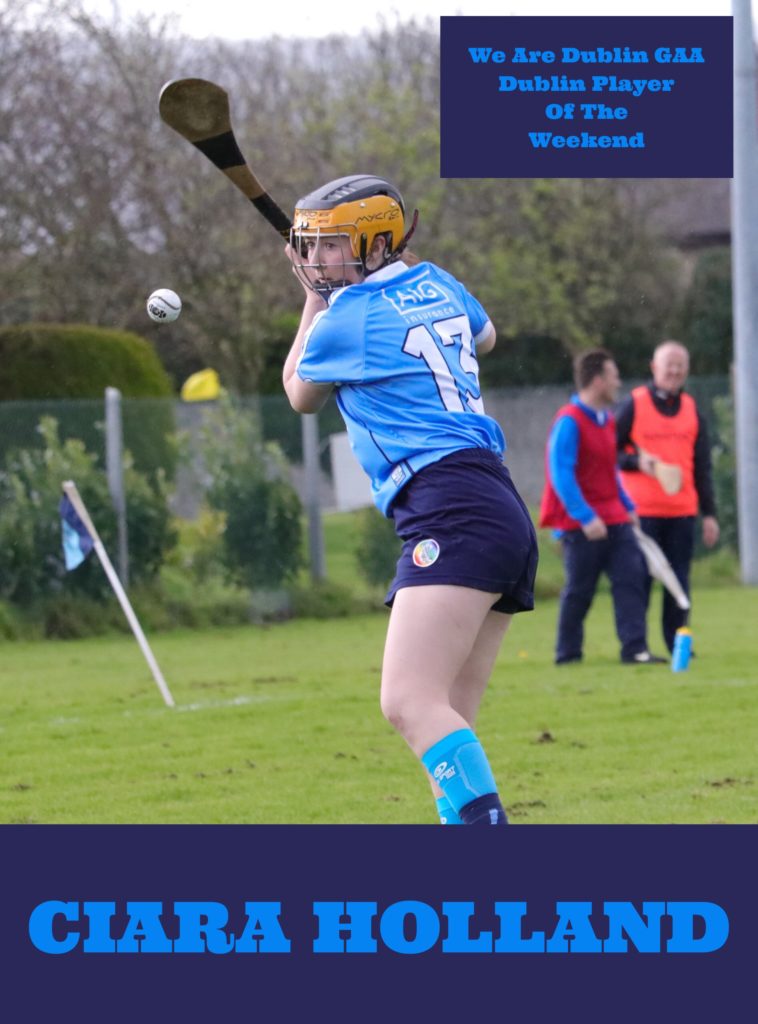 Where are the weeks going, another one has passed us by and it’s time to announce this weeks winner of the We Are Dublin GAA, Dublin Player Of The Weekend award.

For our new followers that have joined us over the last seven days, this is a weekly awarded given to the Dublin player we choose in our opinion who was the standout player for his or her team from the previous weekends inter-county action.

We had ten different games and players to choose from this week from Camogie,Ladies Football, Men’s Football and Hurling with plenty of players from each game up for consideration making it a difficult choice.

But one player stood out not only for her scoring contribution, but also for her all round game.

So the winner of this weeks We Are Dublin GAA, Dublin Player Of The Weekend is Naomh Mearnóg and Dublin Minor Camogie star CIARA HOLLAND.

Ciara was just sensational in a fantastic display by the Dublin Minor Camogie team in their victory over Offaly. Both Dublin and Ciara started the game on fire and a couple of minutes into the game she hit a stunning shot to the back of the Offaly net for Dublin’s second goal of the match.

Ciara went on to finish the young Dubs stop scorer on the day with a personal total of 1-05 which included four pinpoint accurate frees.

But scoring was not the only contribution by Ciara as she put in an serious shift in sky blue full of energy, hooking, blocking, chasing down players and either turning over possession or forcing opposing players into rushed passes that presented the ball back to Dublin.

Ciara was involved in numerous Dublin moves and if she herself wasn’t on the end of a passage of play, then you could guarantee the young Naomh Mearnóg’s star was involved somewhere in the build up to many of the girls in blue attacking moves.

So congratulations to Ciara Holland the very worthy winner of this weeks We Are Dublin GAA, Dublin Player Of The Weekend award.