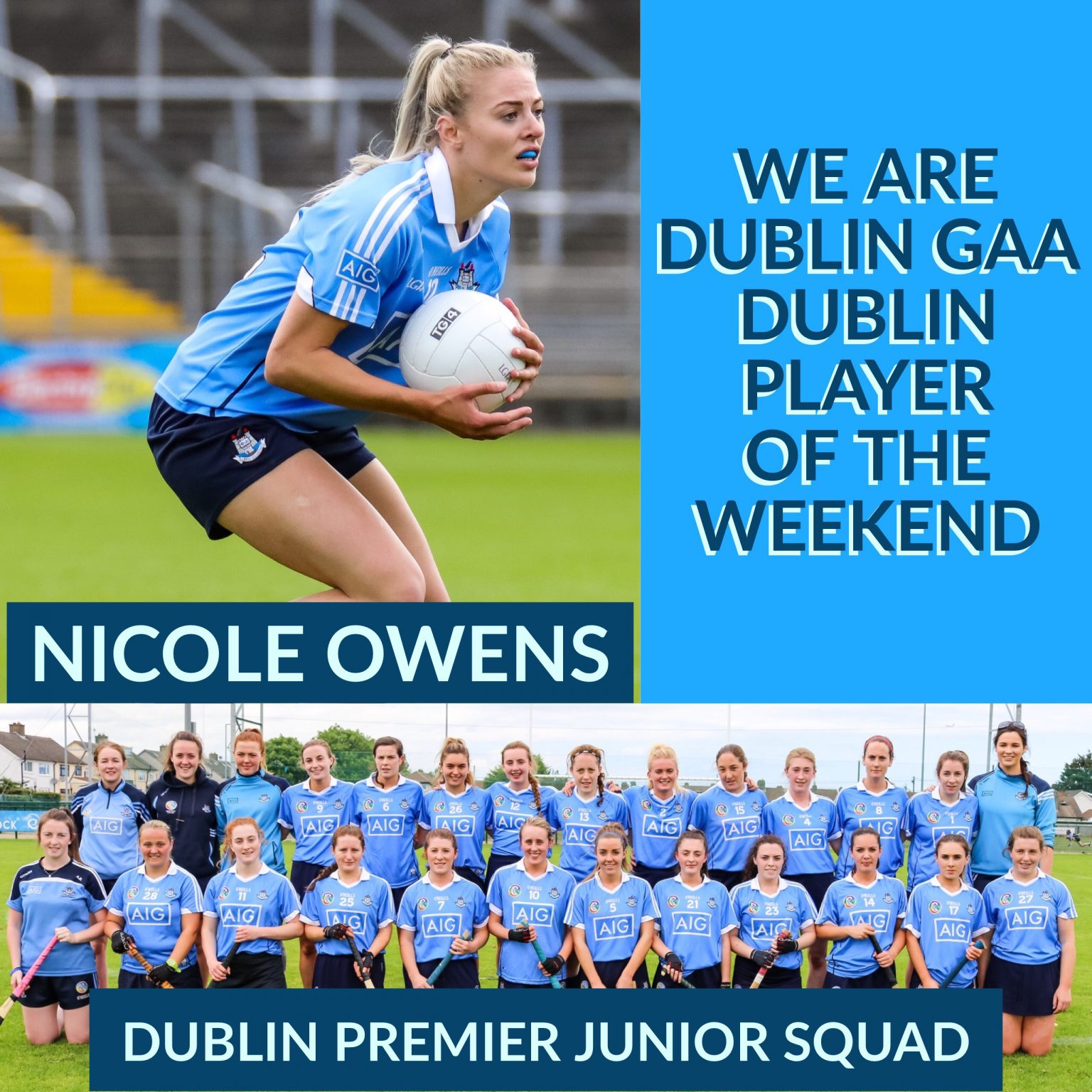 It’s that time of the week again when we name the We Are Dublin GAA,Dublin Player Of The Weekend.

As we say every week for any of our new followers who are unaware of what this is, it’s a weekly award we give to the Dublin player that we choose as the standout player from the previous weekends intercounty action.

The Dublin senior ladies footballers, Premier Junior and U16A camogie squads and the Minor Hurlers were all involved in games last weekend and as usual there were a number of players up for consideration.

But two performances stood out among all the others last weekend and it would have been unfair and impossible to pick one over the other. So this week we are changing things up and the award will be given to an individual player and an entire squad.

So the winners of this weeks Dublin Player of The Weekend goes to Dublin Senior Ladies Footballer Nicole Owens and also the entire Dublin Premier Junior Camogie squad.

Nicole was just scintillating last Saturday for Dublin as they swept aside Waterford to reach their fourth All Ireland Semi Final in a row.

Nicole scored Dublin’s crucial first goal of the quarter final and she finished with a personal tally of 1-04 on the day in an all action display.

Nicole must have covered every blade of grass of the Nowlan Park pitch, tracking back and counter attacking with menace. Waterford found the Dublin star to hot to handle and when she wasn’t knocking over scores herself, she was back helping out the defence and had a huge influence in most of Dublin’s attacking moves.

Also on Saturday in the Gaelic Grounds in Limerick the Dublin Premier Junior Camogie Squad were taking on Kerry for a place in this seasons All Ireland Final.

The sides had met in the league earlier in the season with the girls in blue coming out on top in a tight game.

The first half of their semi final meeting was just as tight with Dublin in front by a single point at the break. But the girls in blue up the ante after the break and a goal from Evelyn Twomey and the accuracy from frees from Aoife Bugler helped send the Dubs to the showpiece final as they had six points to spare over Kerry at the finish.

But it wasn’t just the Dublin scorers that stood out, all over the pitch the players stood up to be counted, the defence and midfield were superb limiting the scoring opportunities for Kerry while also supplying enough quality ball to the Dublin forwards.

Even a late penalty to Kerry couldn’t ripple the back of the Dublin net as a combination of goalkeeper and defender cleared the lines to ensure there would be no fairytale comeback for the girls in green and gold and Dublin would take their place in the All Ireland Final.

So for all the above reasons for both Nicole and Dublin’s Premier Juniors we couldn’t split them.

So it’s a huge congratulations to both NICOLE OWENS and the DUBLIN PREMIER JUNIOR CAMOGIE SQUAD two very deserving winners of this weeks, We Are Dublin GAA, Dublin Player Of The Weekend Award.