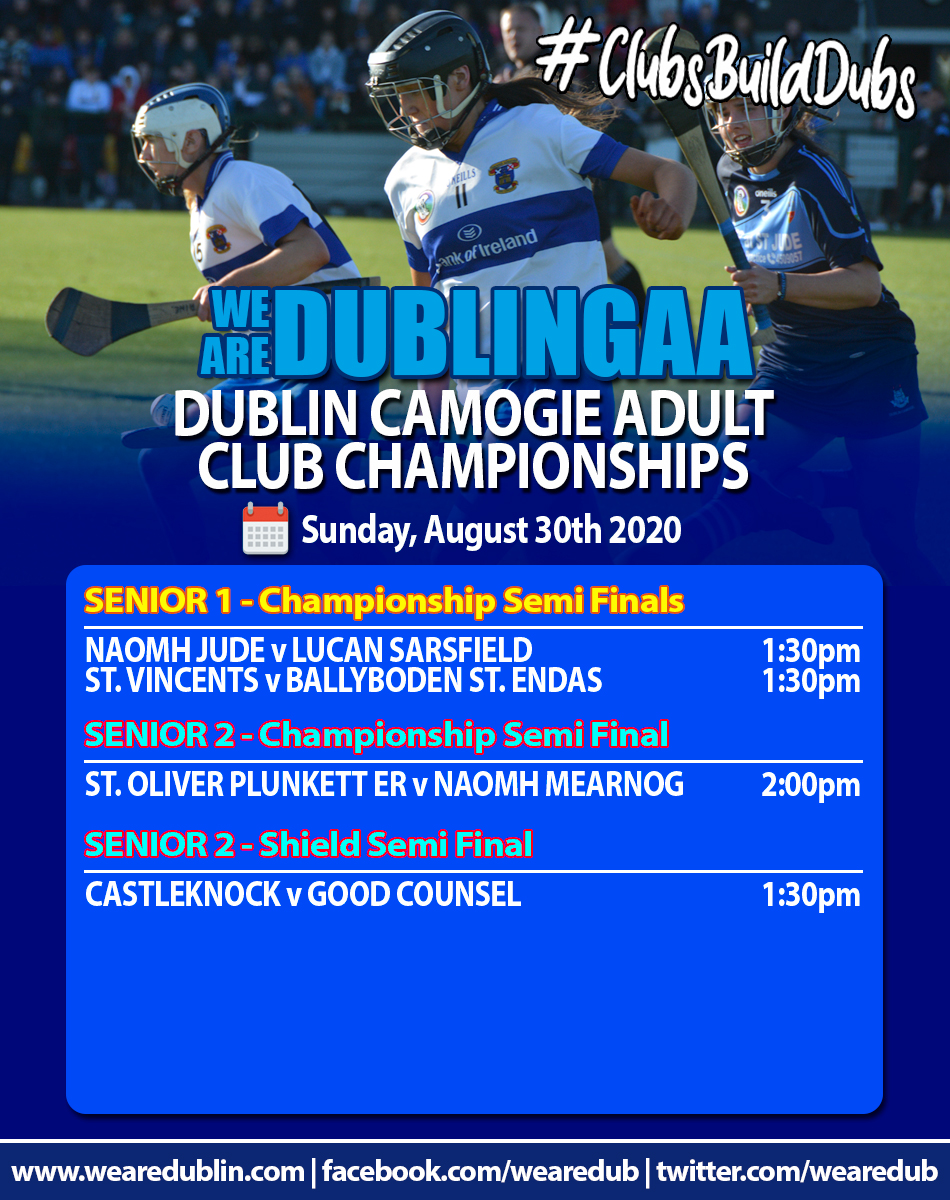 At 1:30pm tomorrow afternoon the last four in this year’s Senior 1 Camogie competition will do battle in the hope of competing in the decider for the highest honour in Dublin Camogie. And the last four are the same as they were a year ago as Naomh Jude, Lucan Sarsfield, St. Vincents and Ballyboden St. Endas all contest the championship.

Naomh Jude completed an unbeaten round robin phase in Group 2 with three consecutive wins. A 1-08 to 0-08 victory on Round 1 over Na Fianna was followed by a 2-12 to 0-06 win over Faughs/Celtic in Round 2. The left a 0-10 gap between themselves and Ballyboden St. Endas in Round 3 to finish with a flourish and are worth their name on the fixture tomorrow. Finalists last year after seeing off Boden in that Semi Final, Judes will be hoping for similar fortune tomorrow.

Lucan Sarsfield will obviously have other ideas as the enter the frey as Group 1 runners up. A 2-14 to 2-11 win over Kilmacud Crokes in Round 1 was enough in this smaller group to see Lucan through to tomorrow’s last four clash. They were well beaten by reigning champions St. Vincents in their second game on a 0-18 to 0-05 scoreline. In last year’s Semi Final clash, again with St. Vincents, they were on the end of a 3-17 to 0-05 defeat. So the ladies from Lucan will be looking to leave that behind tomorrow and vie for a place in the 2020 Final.

Reigning champions St. Vincents have looked very comfortable in both their round robin games. After the bye in the opening round their second half performance over Lucan showed their championship calibre, and it set their stall out for their intent on retaining the Senior 1 crown. A 1-15 to 1-10 victory over Crokes last week was enough to confirm their top spot in the group and gave them the draw against the other group’s runners up.

That side is Ballyboden St. Endas, who only dropped points against Naomh Jude in last week’s final round. Before that they’d racked up back to back wins over Faughs/Celtic and Na Fianna, enough to get their names on the Semi Final role call once again. Beaten by Judes in last year’s last four clash, Boden will know the extent of the task in hand tomorrow if they’re to overthrow the current champs.

In a repeat of one of the Semi Finals of last year’s Senior 2 competition, St. Oliver Plunkett Eoghan Ruadh and Naomh Mearnog are paired together again this year. In that clash Plunketts were solid 4-10 to 1-05 winners and will hope to have the same fortune tomorrow.

Plunketts finished top of the Group 2 table this season. They ran string of three consecutive wins. A 1-10 to 0-09 win over Good Counsel in Round 1 was followed by a 4-09 to 1-06 victory over Cuala on the road in Round 2. And with a 3-12 to 1-06 win over Ballinteer St. John’s last weekend, it saw Plunketts comfortably secure their last four slot tomorrow.

Mearnogs agonisingly lost to Group 1 winners Skerries Harps by a solitary point in their Round 1 encounter. But picked up the pieces from there to beat Castleknock by 2-12 to 1-11 in Round 2, and Raheny by a whopping 7-27 to 0-01 in the final round. You’d expect tomorrow’s clash with these two sides to be closer than a year ago.

*Please note this game will be played on Plunkett’s Phoenix Park Pitch at 2pm and not in Martin Savage Park as originally scheduled.

One point in the table Group 1 table saw Castleknock miss out on a Championship Semi Final slot to Naomh Mearnog. But nevertheless they still get to compete for some silverware as they take on Good Counsel in tomorrow’s Shield Final. Castleknock drew in the final round against Group winners Skerries on a 4-10 to 1-19 scoreline, which many might have expected them to lose.

Good Counsel suffered three straight losses in the Group 2 competition, so will relish the chance of some more game time tomorrow. And they’ll be hoping for better fortunes in the finish of their 2020 championship campaign.

The winners of tomorrow’s Shield Semi Final will face Ballinteer St. John’s in the decider.