We’ve a final, a shield semi final and more round action in the Junior Championship competitions tomorrow night 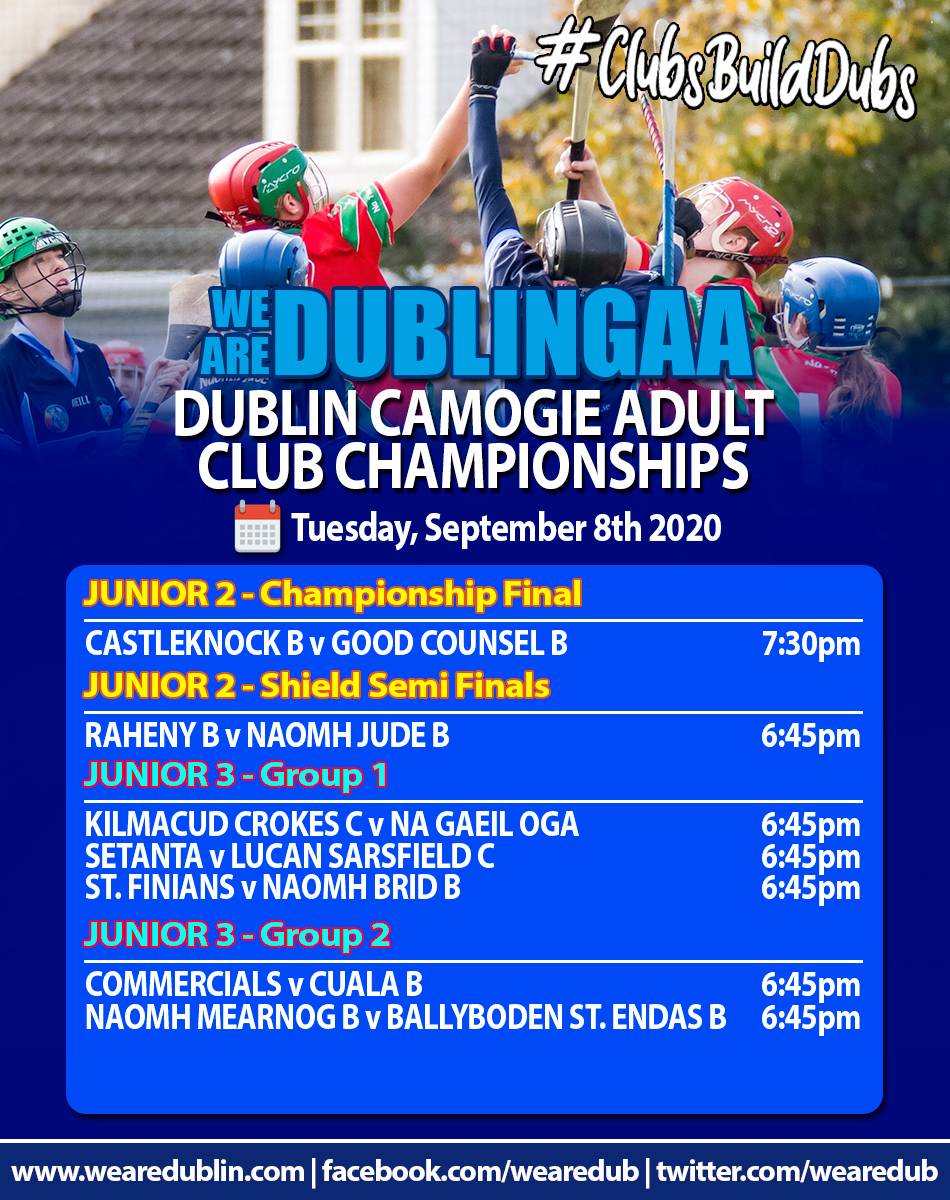 While Naomh Jude are still celebrating being crowned the new Senior 1 Champions in this year’s We Are Dublin GAA Dublin Camogie Adult Club Championships, the action continues tomorrow evening in the Junior Championship. The Junior 2 final takes centre stage in Abbotstown. We’ve a Shield Semi final in the same grade. And there’s also more round robin action in the Junior 3 and junior 4 competitions.

The National Sports Campus in Abbotstown will once again host another Championship final tomorrow night. This time it’s the last two teams in the Junior 2 competition going head to had for the silverware. And once it’s done we’ll be crowning either Castleknock B or Good Counsel B as Junior 2 Champions.

Castleknock finished unbeaten at the top of Group 1. The saw off the challenge of Naomh Jude B in Round 1 on an emphatic 5-10 to 0-08 scoreline. From there they defeated Skerries Harps B by 3-15 to 1-07, finishing their Round Robin campaign with a 2-07 to 1-04 victory over Na Fianna C.

Good Counsel took a similar journey topping Group 2 with the maximum points. A 4-05 to 0-09 win over Raheny was followed by a slightly closer 2-09 to 2-05 win over Whitehall Colmcille in Round 2. And they finished their round phase with a healthy 4-07 to 1-03 over St. Oliver Plunkett Eoghan Ruadh B.

Both sides put in impressive performances in the last four clashes. Castleknock were drawn against Round 2 runners up Whitehall and finished with 13 points to spare on a 1-18 to 1-05 scoreline. Good Counsel took on Na Fianna C and advanced to the final winning by 3-11 to 0-09. So tomorrow night is sure to be a tight and close game.

Raheny B and Naomh Jude B will square off in the first of two Shield Semi Finals tomorrow night. Skerries B and Plunketts B will wait until September 15th to play their Semi Final.

We’ve an interesting situation in Group 1 of this competition, and who know what way it will go. As it stands, St. Finians and Naomh Brid both sit on top on six points each. Just below them on five points are both Setanta and Lucan Sarsfield C. With Finians and Brigids, and Setanta and Lucan facing each other respectively tomorrow night, we could be looking at a very different table on Wednesday morning.

St. Finians and Setanta also have an outstanding game to play after tomorrow night so right now it’s too close to call.

In Group 2 things are a little bit more straight forward. Cuala C lead the group after 2 wins, with Ballyboden St. Endas C and Commercials sitting below them. Cuala face Commercials tomorrow night but such is the size of their score difference, even if Commercials are victorious tomorrow night, Cuala should still qualify.

In the other group game Ballyboden face Naomh Mearnog. A win for them could also see them on four points. No other outstanding games so this group will be decided tomorrow. 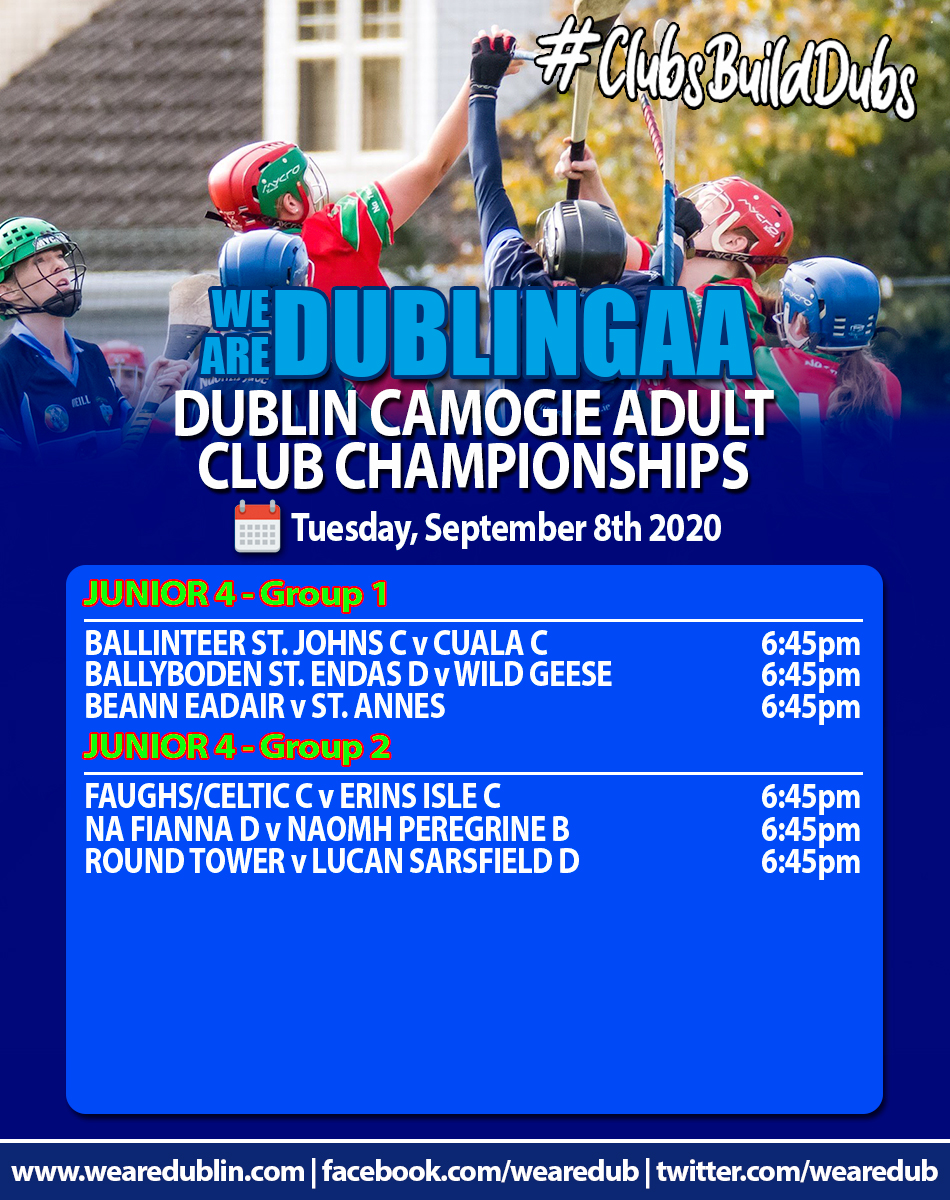 St. Annes will look to record their fifth win on the bounce tomorrow night when they face Beann Eadair in the final round of the Group 1 competition. And that will see them nail a knockout slot. Ballinteer St. John’s C and Cuala C are also in the hunt as they go head to head. As are Ballyboden St. Endas D who face Wild Geese. Boden also have an extra game to play out so we’ll wait for the results.

In Group 2 Round Towers are already qualified, but face Lucan Sarsfield D tomorrow night, with Lucan a step away from qualification. Faughs/Celtic C welcome Erins Isle C, and if Faughs win they could also be in with a shout. In the remaining group game Na Fianna D will face Naomh Peregrine B to complete the group phase.

Please note all fixtures are correct at the time of this post but may be subject to change. Stay tuned here and on the official Dublin Camogie website for updates and details.

Two changes for Dublin for their Intermediate championship trip to Kerry