Another busy day of action across the county in the We Are Dublin GAA Dublin Camogie Adult Club Championships. And we have results from all eight games that threw in from this morning through the afternoon.

A great end to a first year in the Senior 1 competition for Kilmacud Crokes. While they weren’t competing in the Championship melting pot, they at least sign off the season with a Senior 1 Shield win. They faced some stern opposition in Na Fianna, but the Stillorgan outfit ran out seven point winners on a 3-10 to 2-06 scoreline. And that concludes all the action from this year’s Senior 1 competition.

An eight point win for Na Fianna B was needed in today’s game to qualify for the Semi Finals of the Inter 2 competition. And thnankfully for the Mobhi Road side they finished 0-10 clear of Naomh Fionnbarra to advance. A game that was both postponed and abandoned finally got played. And Na Fianna will now face Erins Isle in the last four, with Isles finishing top of Group 1.

Kilmacud Crokes C advance on the Junior 3 Shield competition after their victory over Naomh Mearnog B this morning. A 3-12 to 3-03 result sees them onto the next game. Likewise Lucan Sarsfield C will also be in the mix as they were victorious over Na Gaeil Oga today by 2-13 to 2-06.

In the Junior 4 Shield competition, Lucan Sarsfield D racked up an 8-12 to 3-00 win over Wild Geese in their early game. Another bug scoreline came form Cuala C who saw off Na Fianna D by 6-14 to 0-03. Beann Eadair stay in the hunt with their 3-06 to 2-03 win over Erins Isle C. And finally Naomh Peregrine B recorded a 4-10 to 2-00 win over Ballinteer St. Johns C to complete the round.

Join us again next week for more action in the Adult Camogie Championships. And stay tuned here and the official Dublin Camogie website for updates. 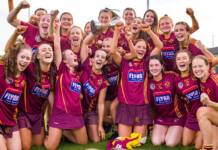 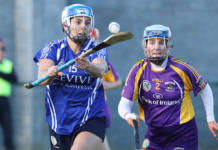 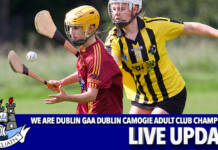 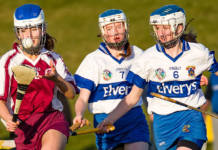