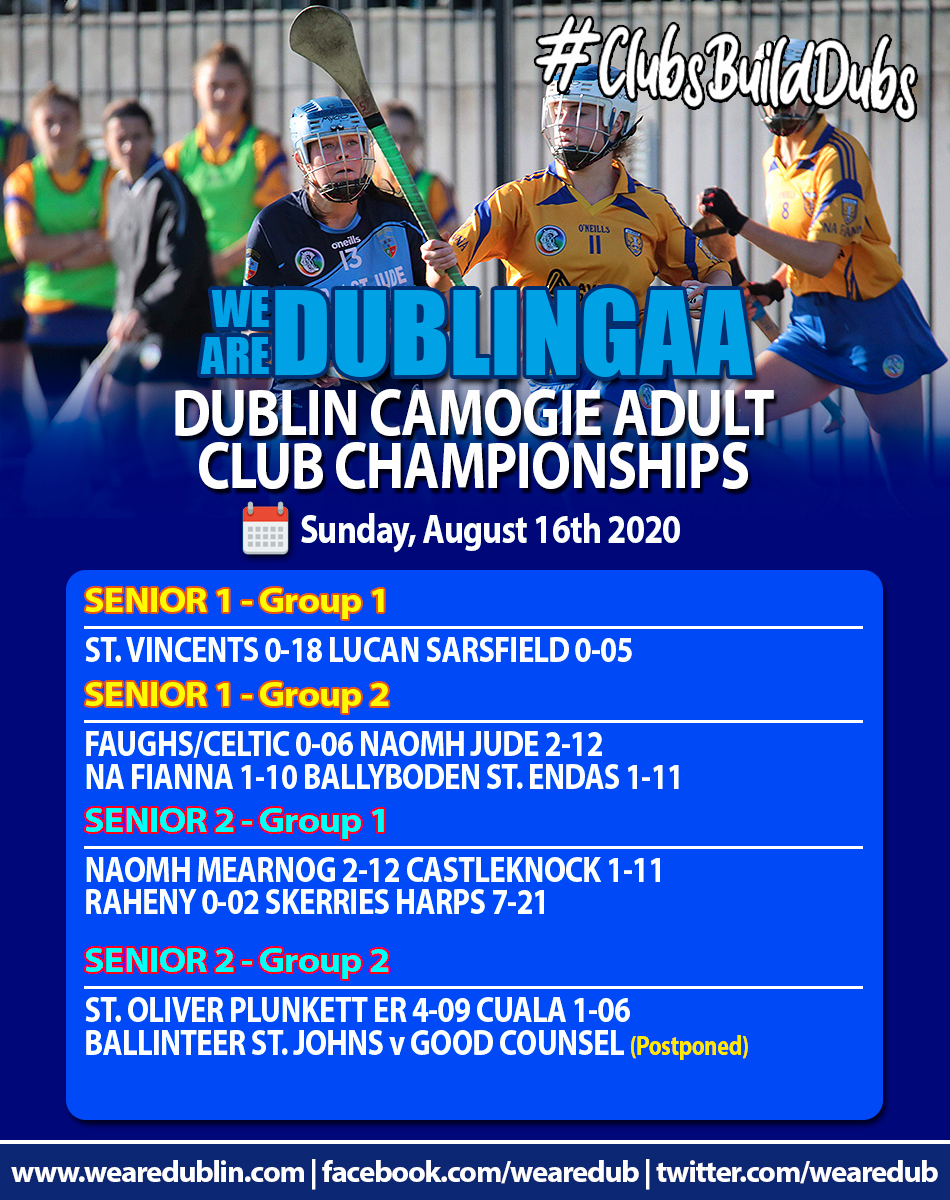 We’re speeding through this year’s We Are Dublin GAA Dublin Camogie Adult Club Championships. And this afternoon Round 2 of both the Senior 1 and Senior 2 Camogie competitions drew to a close, leaving one more round. And after today’s action, things are really becoming clear on who will compete in the closing stages of both competitions.

St. Vincents finally got the defence of their Senior 1 title up and running this afternoon in Pairc Na Uinsionn. And with a strong second half performance, they put Lucan Sarsfield to the sword, winning by 0-18 to 0-05. Certainly a game of two halves, there was only 2 scores seperating the side on 0-06 to 0-04 at the break. But Vincents went through the gears in the second, allowing Lucan only one additional score to their tally. The ladies from Marino head to Stillorgan next week and are expected to record another win over Kilmacud Crokes to advance to the Semi Finals. Lucan are now on a bye week and unless Crokes beat Vincents by big scores in the final round, they’ll see themselves through.

In Group 2, Ballyboden St. Endas and Naomh Judes both secured their last four places with wins today. Judes were 2-12 to 0-06 winners over Faughs/Celtic. This combined with last weeks victory over Na Fianna seals the deal as they attempt to reach the final. In a tough second half battle at Mobhi Road, Ballyboden secured a 1-11 to 1-10 win over Na Fianna. The game could easily have gone either way in the final 10 minutes of play, but Boden dug deep to end one score ahead. It means Na Fianna and Faughs game in Round 3 is for pride, whereas Judes and Boden will play for final positioning to assist their Semi Final draw.

A second consecutive win for Skerries Harps this afternoon all but secures them of a Semi Final slot. A 7-21 to 0-02 beating of Raheny followed their one point win over Naomh Mearnog the previous week. Mearnogs and Castleknock are chasing their tales. It was Mearnogs who ran out 2-12 to 1-11 winners over Castleknock today. Next week will be interesting as Castleknock head for Skerries and Mearnogs travel to Raheny. So the final two will not be confirmed until the action concludes in Round 3.

In Group 2, St. Oliver Plunkett Eoghan Ruadh see themselves through to the last four after a second win on the bounce in this morning’s early throw in. a 4-09 to 1-06 scoreline saw them dispense of Cuala and make it 4 points in the table. They play Ballinteer St. John’s in their final game next week. Today’s game between Ballinteer and Good Counsel was postponed, extending the competition a little further. Counsel head to Cuala next week in the hope of a win to keep their championship alive, but a win for Cuala should see them safely through.

DOUBLE HEADER OF U16 ALL IRELAND CAMOGIE CHAMPIONSHIP ACTION THIS SUNDAY