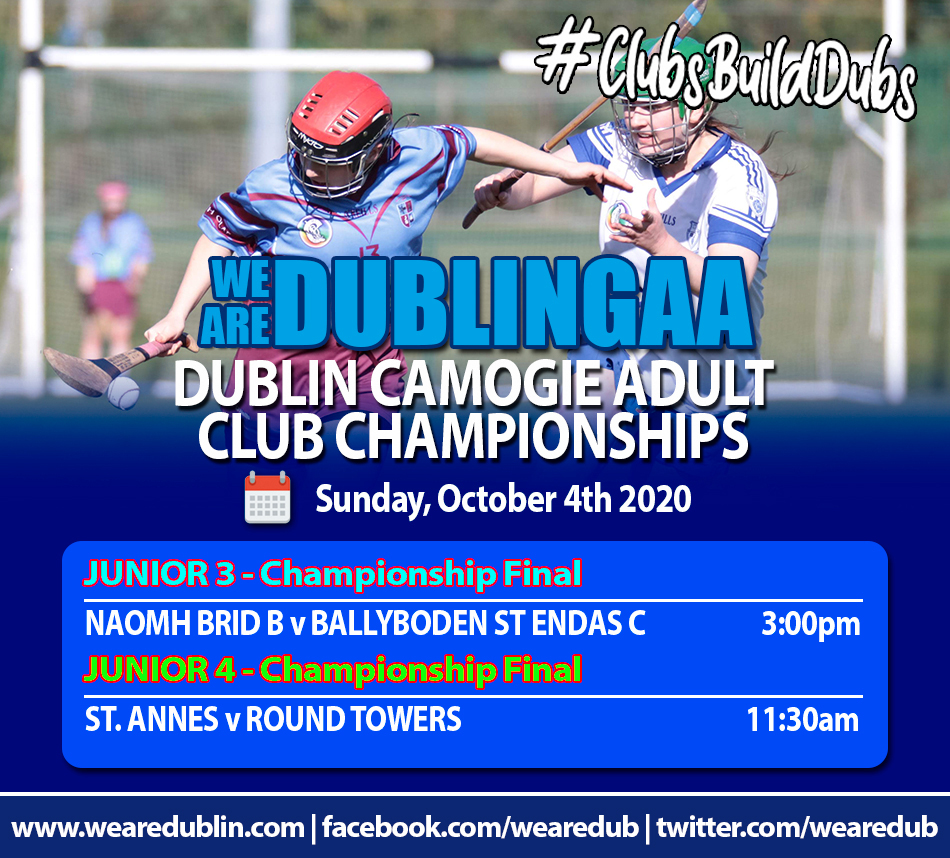 After only nine weeks of action, and a very quick nine weeks at that, we’ve come to the end of the Junior 3 and Junior 4 competitions in this year’s We Are Dublin GAA Dublin Camogie Adult Club Championships. And tomrrow the deciders in both competitions will be thrown in and the winners will be crowned. Abbotstown will be the venue once again for the Junior 3 Championship Final, while St. Anne’s have home advantage in the Junior 4 decider.

In an exciting end to this year’s Junior 3 competition, we see the runners up in both groups come through to decide this competition. Naomh Brid B finished a point behind Setanta in Group 1. The side couldn’t be seperated in Round 1 when they played out a 3-09 to 4-06 draw. From there Brigids drew their second round game against Lucan Sarsfield, before beating Na Gaeil Oga, Kilmacud Crokes C and St. Finians. Those results put them in teh draw against Group 2 Winners Cuala B in the Semi Final. And it was Brigids who came out on top, beating the Dalkey side by 3-08 to 1-12.

Ballyboden St. Endas C were also runners up in their Group 2 only dropping points to Cuala in Round 2. The remainder of their campaign saw them beat Commercials and Naomh Mearnog to set up a Semi Final date with Group 1 winners Setanta. And on the day Boden ended up two point winners on a 2-10 to 3-04 scoreline, securing their place in tomorrow’s final.

Without any of us jumping to conclusion, the outcome of the Junior 4 competition always appeared to be how we’ve arrived at tomorrow’s final pairing. Both St. Annes and Round Towers put in outstanding performaces through the round robin stages and the semi finals to arrive at this decider. So tomorrow will be as evenly matched as we can expect.

Of the five round games in Group 2, Round Towers beat Faughs/Celtic C, Erins Isle C, Naomh Peregrine B and Lucan Sarsfield D, with a walkover to Na Fianna D in Round 3. And like their opponents tomorrow, Towers put in some big shifts, scoring 23 goals and 50 points in those four games played, adding another 4-20 in their Semi Final win over Ballyboden.

Stay tuned both here and on the Official Dublin Camogie website for details and updates on all tomorrow’s action. Please note that all game details are correct at the time of this post and maybe subject to change.