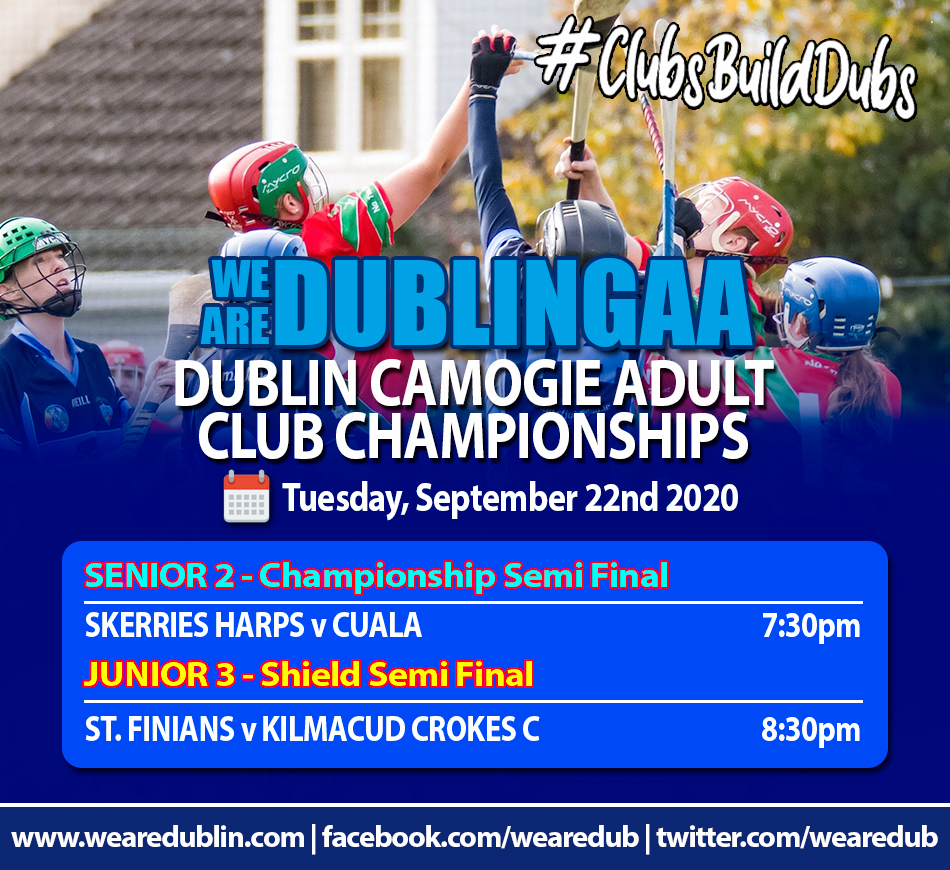 And we continue, with two more games tonight in this year’s We Are Dublin GAA Dublin Camogie Adult Club Championships. At the weekend we crowned new Inter 2 Champions, with Ballyboden St. Endas taking the spoils in their 0-09 to 1-03 win over Whitehall Colmcille. We know that Erins Isle and Naomh Peregrine will contest this year’s Inter 1 Championship decider. And Naomh Brid B and Ballyboden St. Endas C will be involved in the Junior 3 Championship Final.

But let’s get onto tonight’s couple of games.

Group 1’s Skerries Harps wil take on Group 2 runners up Cuala this evening in the second of the Senior 2 Semi Finals. Waiting for the winners of this game are St. Oliver Plunkett Eoghan Ruadh, who were 1-19 to 2-08 victors over Naomh Mearnog back August 30th.

Skerries went three for three in their group campaign, with wins over Naomh Mearnog, Raheny and Castleknock to set up a slot in tonight’s proceedings. Cuala’s only defeat was against Plunkett Eoghan Ruadh in Round 2, but picked up wins either side of that loss against Ballinteer St. Johns and Good Counsel. We’ve been waiting for this one and we hope it’s a great game. The games are being played behind closed doors right now due to COVID-19 restrictions. But for anyone that would like to watch the game you can tune into Skerries Harps Facebook Page at 7:30pm were they will be streaming the game live. Just Click Here.

Last week Kilmacud Crokes C were 3-12 to 3-03 winners over Naomh Mearnog B in a Junior 3 Camogie Shield Quarter Final, which paved the way for tonight’s Semi Final game against St. Finians. The game is being played under lights at Parnells GAA Club in Coolock Village with a 8:30pm throw.