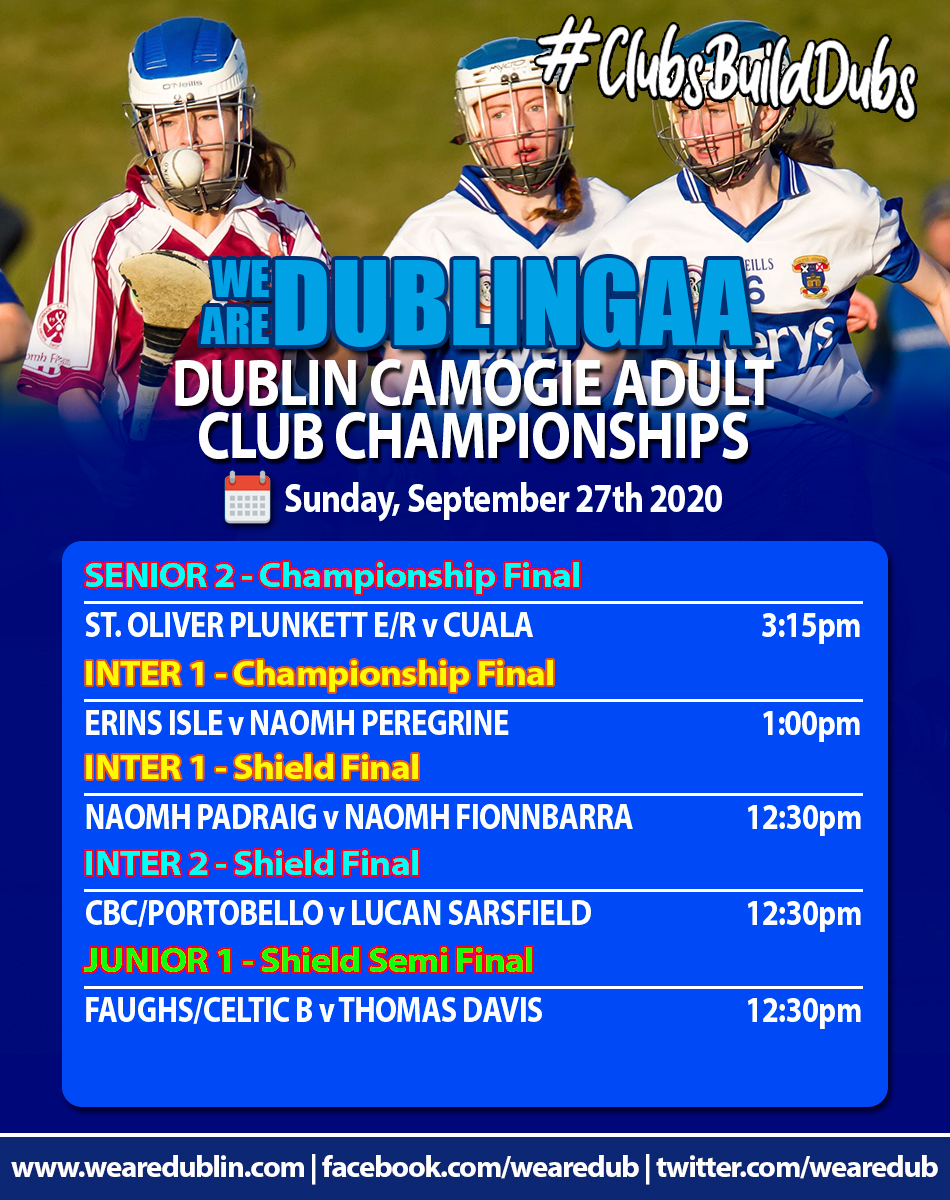 We’re on the home stretch in the county Camogie Championship. And despite the majority of games being played behind closed doors, we’ve thankfully been able to watch streamed games thanks to the Dublin Camogie county board and individual clubs taking the initiative to bring the action to their supporters.

Tomorrow we have 2 Championship Finals, a semi final and plenty of shield action in the We Are Dublin GAA Dublin Camogie Adult Club Championships. We’ll be in Abbotstown for the Senior 2 and Inter 1 Finals. But there’s plenty of action elsewhere throughout the day.

Later than scheduled, tomorrow we see the the two top teams in the Senior 2 go head to head in this decider. And both St. Oliver Plunkett Eoghan Ruadh and Cuala are primed to take the spoils.

Plunketts have put in some big shifts in the Senior 2 competition. And interestingly have already faced and beaten tomorrow’s opponents Cuala in the Round Robin stages. A 1-10 to 0-09 win over Good Counsel got them off to the perfect start this year. They followed that with their 4-09 to 1-06 win over the Dalkey side. And in Round 3 a 3-12 to 1-06 win over Ballinteer St. Johns saw them qualify for the semi finals and a date with Group 1 runners up Naomh Mearnog. And in style they ran out with eight points to spare to reach tomorrow’s decider.

Cuala, as already mentioned, dropped points in Group 2 to Plunketts. But wins over Ballinteer and Good Counsel saw them finish runners up in Group 2. Last week they faced hotly tipped Skerries Harps in their last four clash and ran out 6 point winners on a 1-12 to 1-06 scoreline to advance.

Both the Championship and Shield finals will be played out tomorrow in this competition. And it’s Erins Isle and Naomh Peregrine who’ll play for the big silverware in Abbotstown.

Isles went three for three in the Inter 1 rounds. And just like the Senior 2 competition tomorrow’s two sides have already met during the Championship. Isles saw off St. Vincents B in the opening round before beating Peregrines by 3-14 to 2-09 in Round 2. And even though they didn’t need it, they saw off Crumlin in Round 3 on a massive 4-17 to 2-05 scoreline. Their Semi Final game against Na Fianna was expected to be closer than it turned out, with Erins Isle winning comfortably by 3-17 to 1-05.

Peregrines only dropped points to Erins Isle in the Rounds and will be hoping not to repeat that tomorrow. They scored wins over Crumlin and Vincents B to finish runners up and then saw off Naomh Brid in a hotly contested Semi Final on a 2-14 to 2-09 scoreline.

Also tomorrow, Naomh Padraig and Naomh Fionbarra will square off in the Shield Final after both getting through their knockout games. 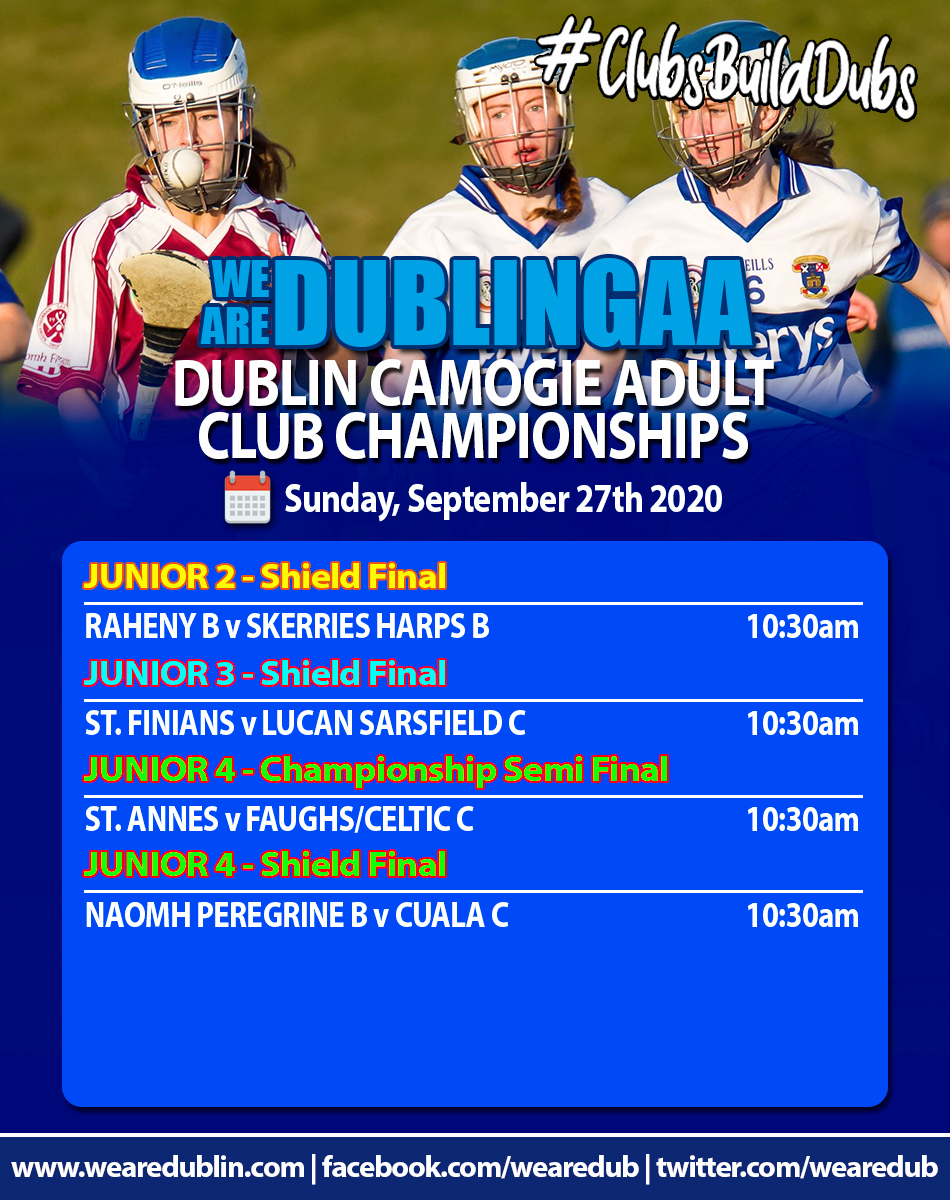 Faughs/Celtic C won three, drew one and lost one in their Group 2 campaign. They picked themselves up after losing to Round Towers on the opening day to beat Na Fianna D, draw against Lucan Sarsfield D, beat Naomh Peregrine B and Erins Isle C to book their place in tomorrow’s last four clash. The winners will face Round Towers of Clondalkin in the Junior 4 Final.