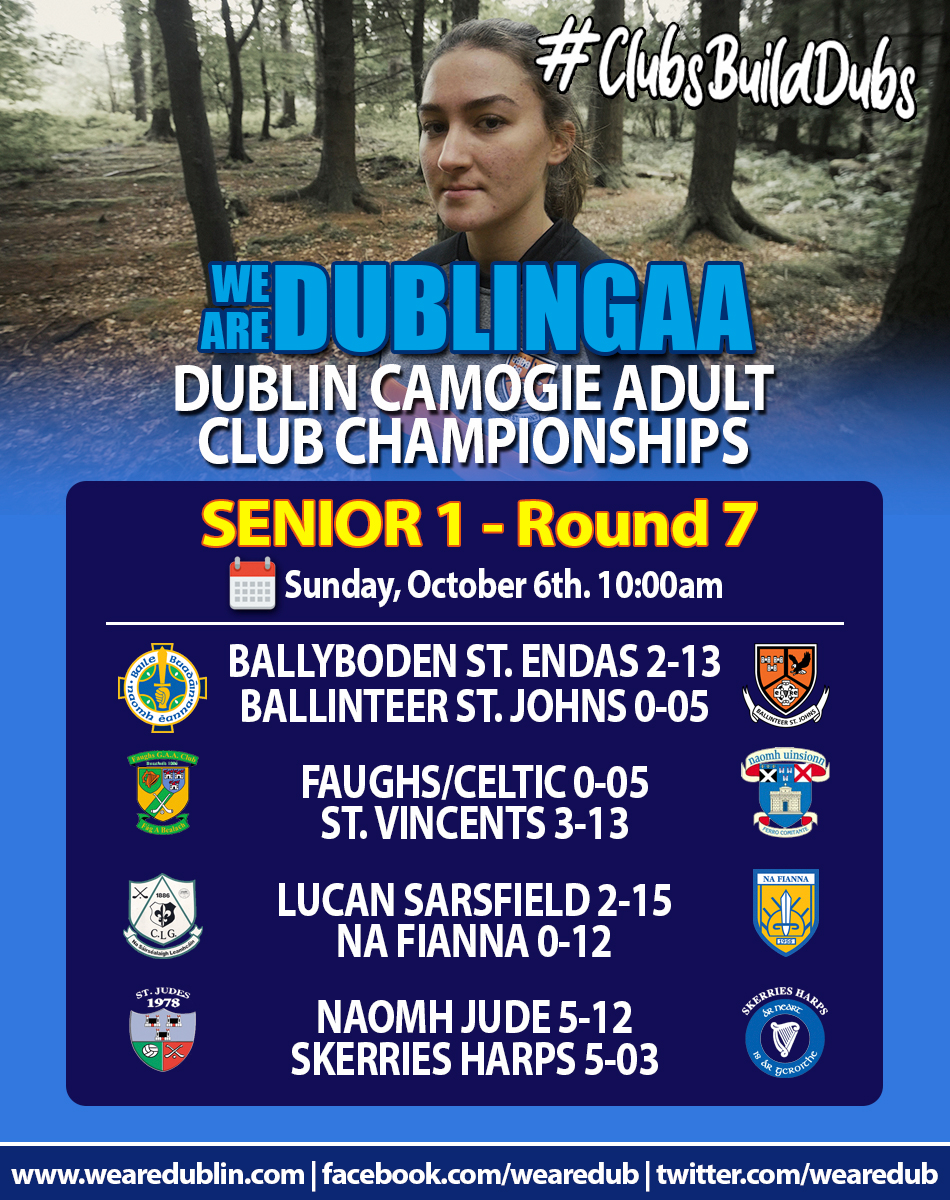 Well the weather didn’t mess us up too much today, with only a few games in the We Are Dublin GAA / Dublin Camogie Adult Club Championships postponed due to unplayable pitches. And we can now see how things stand in almost of of the grades for the knockout stages in the competition. So Lets get to it.

The top four in the Senior 1 Camogie Championship have all completed their games and we can confirm that St. Vincents, Ballyboden St. Endas, Naomh Jude and Lucan Sarsfield will contest the Semi Finals.

The first three teams listed had already qualified before their games today. St. Vincents and Ballyboden St. Endas both finished with six wins from seven games. Today Vincents finished the round robin with a 3-13 to 0-05 victory over Faughs/Celtic. And Ballyboden beat Ballinteer St. Johns by 2-13 to 0-05.

Naomh Jude had also qualified and played out a ten goal closing game against Skerries Harps winning 5-12 to 5-03. But the crunch tie today was for the remaining Semi Final slot. The winner of this game would secure it. At half time Na Fianna were two points ahead of opponents Lucan Sarsfield and on course to take the slot. But a stronger second half from Lucan saw the home side finish 2-15 to 0-12 winners and into the last four.

We’ll bring you all the details of the Semi Finals once confirmed. 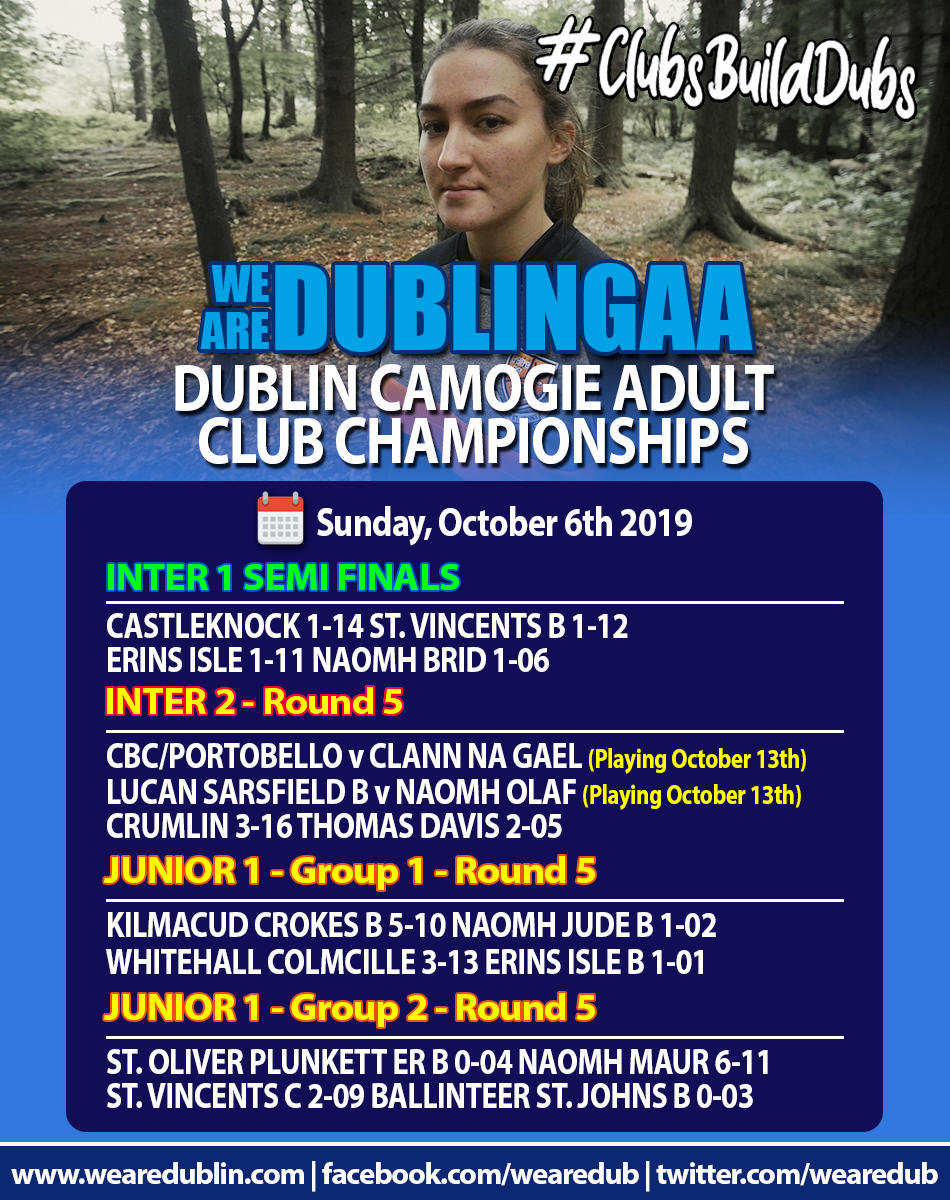 Group 1 and 2 winners Castleknock and Erins Isle will contest this year’s Inter 1 Final having successfully contested their respective Semi Finals.

Castleknock remain unbeaten albeit a tight affair today against St. Vincents B. Only two scores seperated the sides at the end of extra time, with Castleknock shading it by 1-14 to 1-12.

In the other Semi Final Erins Isle had five points to spare over Naomh Brid sending them into this year’s final. The 1-11 to 1-06 scoreline is Isles fourth win on the bounce and they’ll be itching for the final.

With two games postponed until next weekend, the only action today was between Crumlin and Thomas Davis. And Crumlin have given themselves a lifeline. Beating Thomas Davis 3-16 to 2-05 leaves them level on points with Clann na Gael.

They play Clann this Tuesday in a rescheduled Round 4 game, and if they can beat them, it means Clann na Gael would need to beat CBC/Portobello in their final game next weekend to advance. So this one is still wide open.

In Group 2 Naomh Maur are on six points following their 6-11 to 0-04 win over St. Oliver Plunkett Eoghan Ruadh today. And they have one game remaining against Raheny B next weekend. Win or lose they’ll come out top of the group. 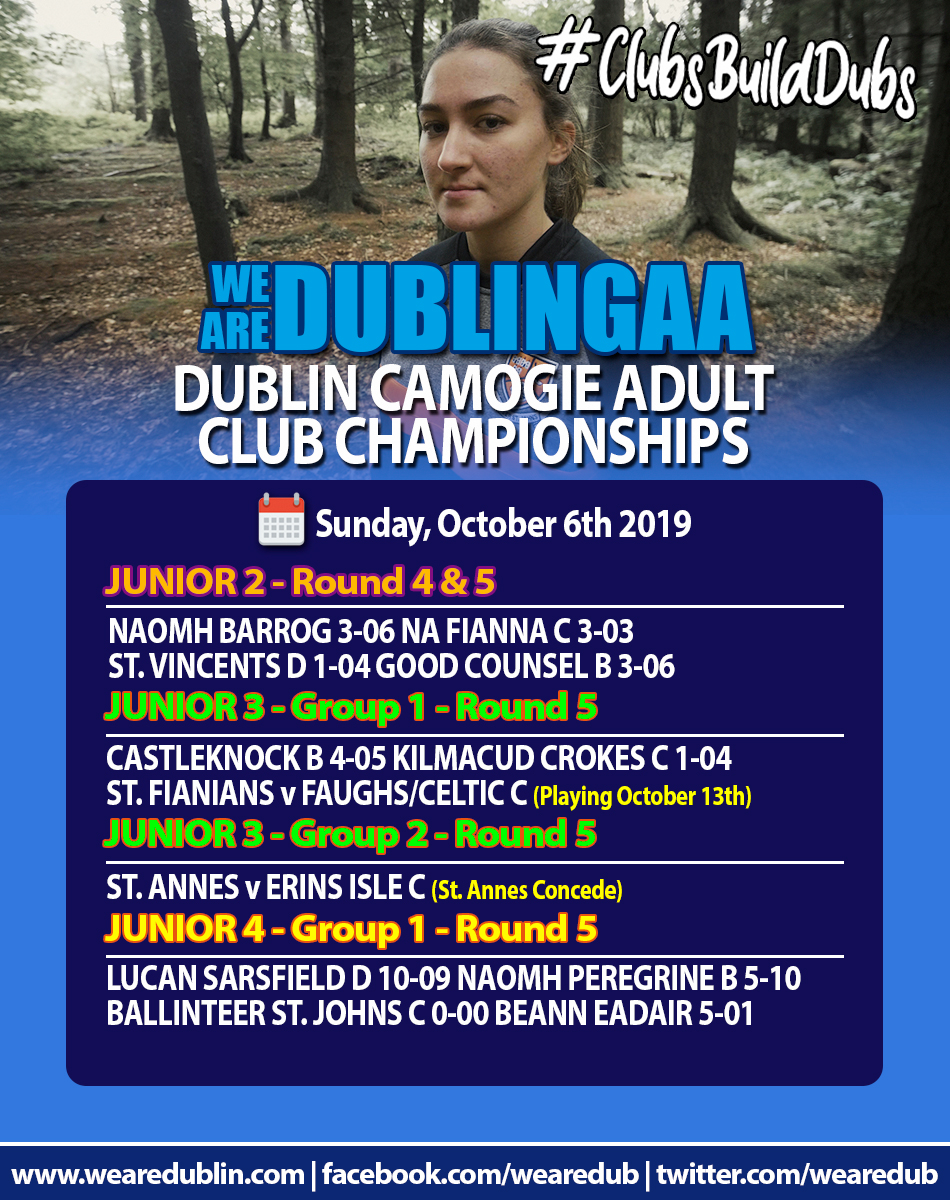 Naomh Barrog are five for five after their final round game today. They played a close 3-06 to 3-03 game beating Na Fianna C.

It’s below Barrogs that still needs to be decided. And it’s between Good Counsel B and Skerries Harps. Counsel and Skerries square off next weekend. But Skerries will still have one last game to play after this. They need to win both. Or they need to beat Counsel and chalk up a big score against them.

We’ll have to wait on this one.

Castleknock B completed their five rounds unbeaten today with a 4-05 to 1-04 win over Kilmacud Crokes C. leaving them uncatchable at the top of Group 1.

St Finians are on six points with a decent enough score difference over the opponents next week Faughs/Celtic C, but anything is possible. Cuala B and Setanta finish off their final round game next week.

Naomh Brid B and Commercials will come out of Group 2, and will play each other in their final game on Tuesday.

In the only other game due to be played today St. Annes conceded to Erins Isle C.

Lucan Sarsfield D and Naomh Peregrine B come out the top two in Group 1. In their tie today it was Lucan who came out on top by 10-09 to 5-10.

Na Gaeil Oga and Round Towers qualify from Group 2 in first and second place respectively.

**Please note we will be confirming all dates times and venues for the start of the knockouts in all competition with the Dublin County Board over the coming days.