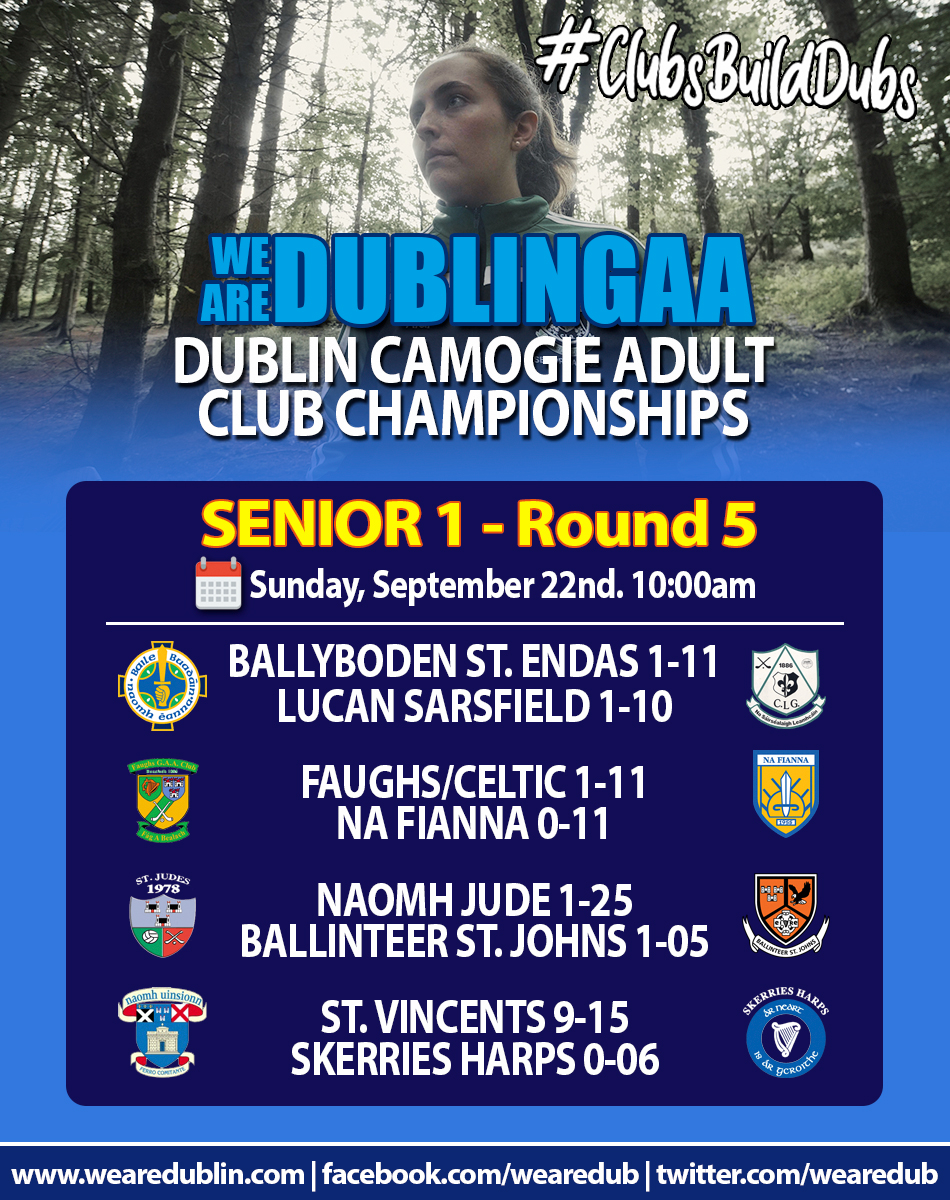 Well thankfully the bad weather didn’t effect too many games as the action continued this morning and this afternoon in the We Are Dublin GAA / Dublin Camogie Adult Club Championships. And there were some great top of the table clashes across the board.

With only two rounds to go in the Senior 1 Camogie Championship, St. Vincents have maintained their unbeaten streak with a comprehensive victory over Skerries Harps in Marino this morning. A 9-15 to 0-06 scoreline sees them on ten championship points and a whopping plus 96 score difference.

Its the third time in the round robin phase but Ballyboden St. Endas prevailed by a single point again as they beat Lucan Sarsfield by 1-11 to 1-10. That gives them four championship wins from five as they head for Na Fianna next weekend.

Na Fianna were left stunned by Faughs/Celtic this morning, with Faughs capturing their first Senior 1 victory. A goal was all that seperated the sides at full time with Faughs winning by 1-11 to 0-11. They head to Ballinteer next weekend.

After drawing with Na Fianna last week, reigning champions Naomh Jude got back to winning ways this morning with a 1-25 to 1-05 win over Ballinteer St. John’s. Next week’s game against St. Vincents will be a big task for Judes. 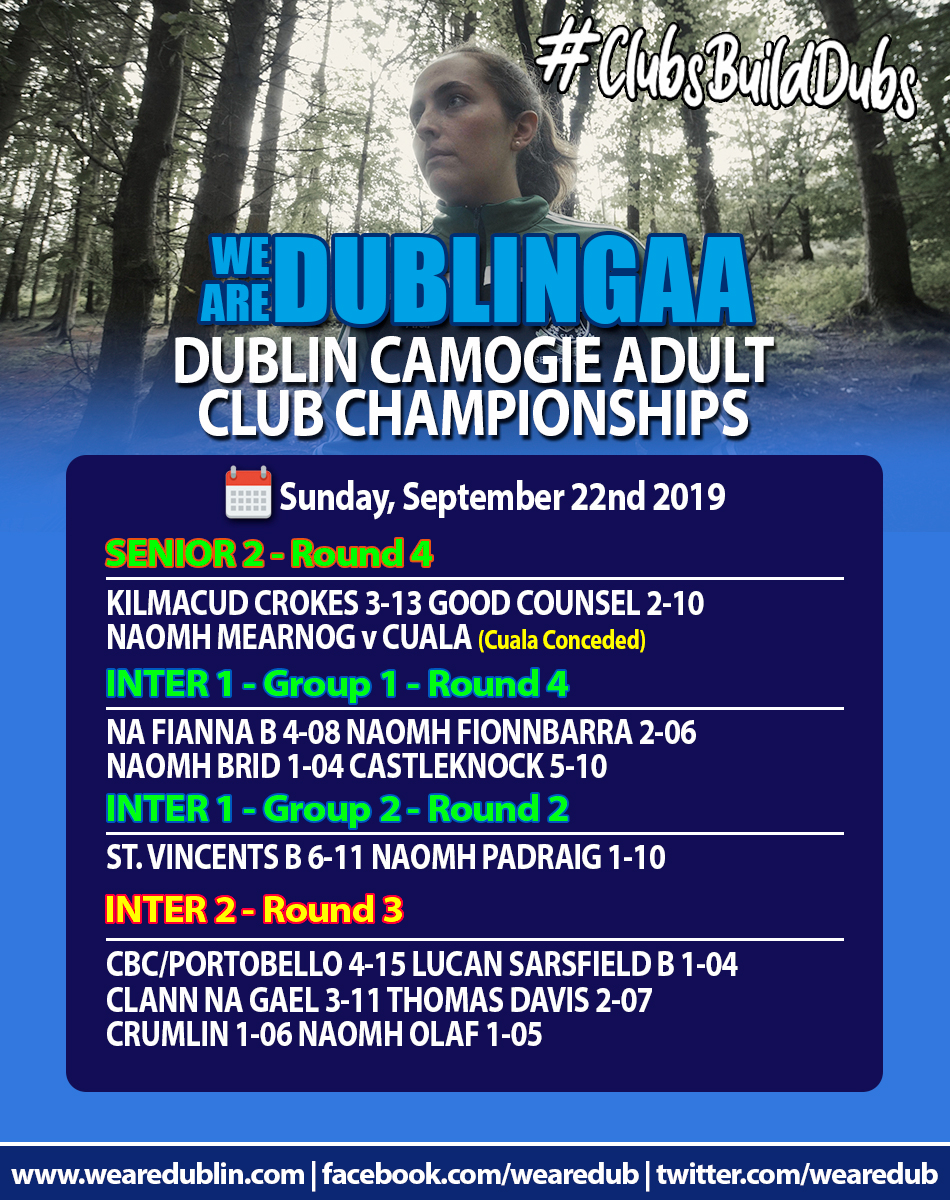 Only one game in Senior 2 this morning as Cuala sadly had to concede their fixture against Naomh Mearnog.

In the other game, it was the battle of the two teams at the top of the table. Both Kilmacud Crokes and Good Counsel were unbeaten in three games until this morning. Either one would move ahead or they’d share the points. But it was Crokes who came through as the winners on a 3-13 to 2-10 scoreline to see them sit top of Senior 2 before the final round.

Na Fianna B will feel they’ve made strides in Group 1 as they picked up their first win in three games with a victory over Naomh Fionnbarra. The 4-08 to 2-06 win lifts them off the bottom of the group table.

Castleknock got the better of Naomh Bríd at the top of the group table, winning this morning’s clash by 5-10 to 1-04. In the final round they’ll have a bye with Brigids playing Finbars in their last game.

St. Vincents B notched up a huge 6-11 to 1-10 victory over Naomh Padraig in their Group 2 Round 2 fixture. That puts them two points behind Erins Isle in the group table.

Crumlin sit third in the table following their 1-06 to 1-05 win over Naomh Olaf this afternoon. With two rounds to go there’s still time for some changes in the table. 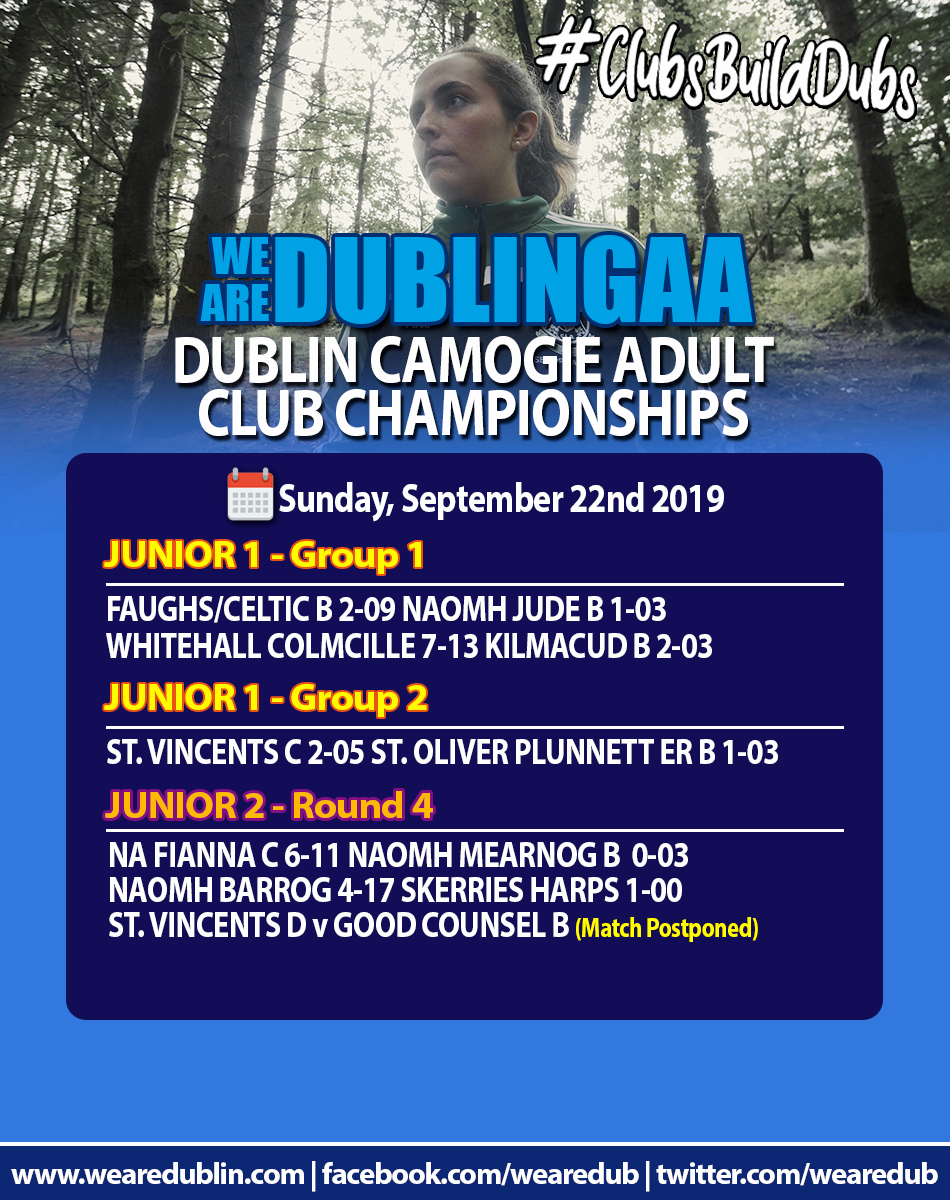 Whitehall Colmcille got the upper hand on Kilmacud Crokes B earlier today with a comprehensive 7-13 to 2-03 victory and it sees them hit the top of the table with a game to spare over their opponents. Faughs/Celtic B got their first championship win, beating Naomh Jude B by 2-09 to 1-03.

In Group 2 St. Vincents C move two points clear of Naomh Maur, Plunketts and Ballinteer in the table. Their 2-05 to 1-03 result over Plunketts sees them edge a little ahead with two rounds to go.

After Four rounds Naomh Barrog are the clear leaders in Junior 2 and remain unbeaten. Their 4-17 to 1-00 win over Skerries Harps this morning puts them on 8 points in the table.

St. Vincents D’s game against Good Counsel B was postponed as the pitch was unplayable. 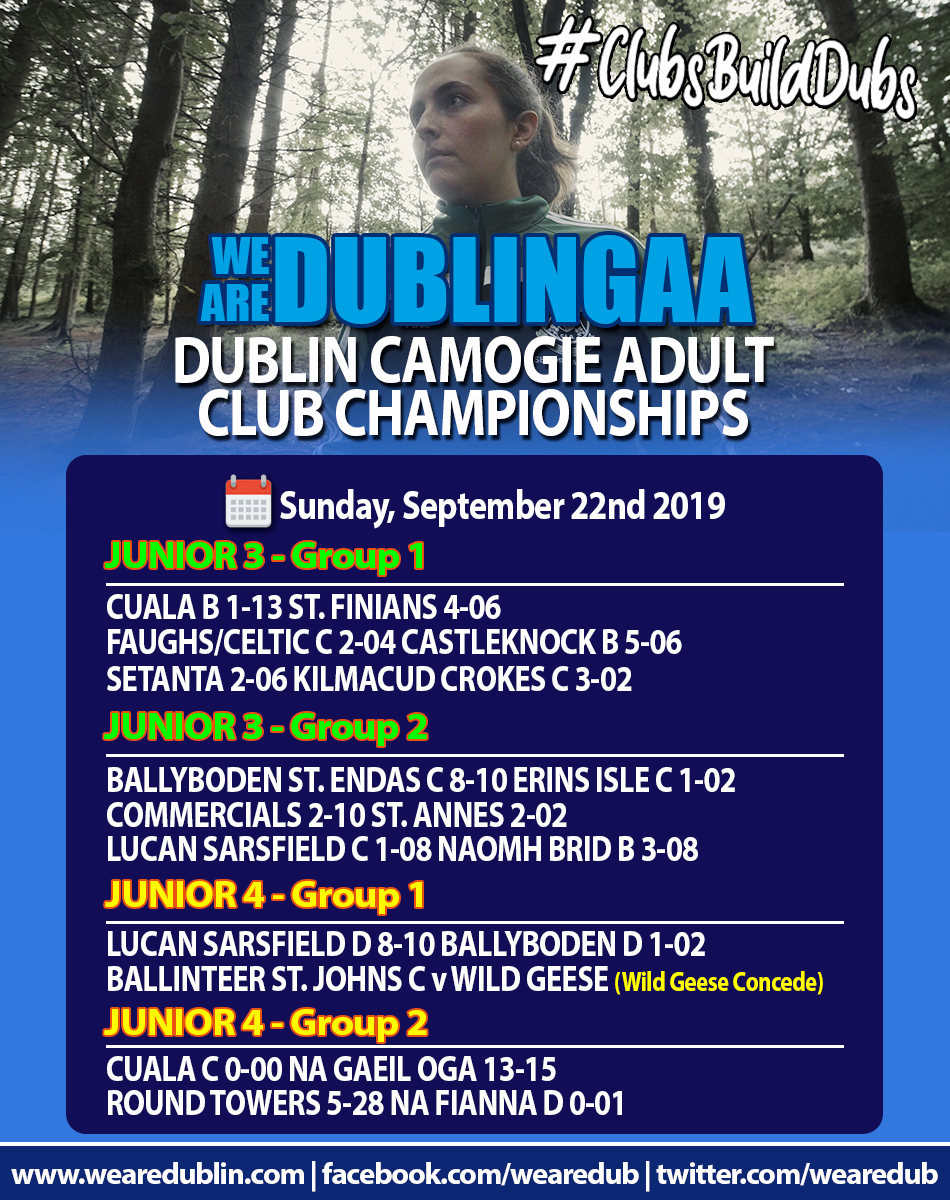 Castleknock B remain unbeaten after their third win today, beating Faughs/Celtic C on a 5-06 to 2-04 scoreline. St. Finians got their second win on the bounce as they were victorious over Cuala B by 4-06 to 1-13.

And one point seperated Setanta and Kilmacud Crokes C after today’s game with Setanta winning on a 2-06 to 3-02 score.

In Group 2 Commercials and Naomh Brid B are still neck and neck at the top.

With Naomh Peregrine B not playing until Thursday, it sees Lucan Sarsfield D hit the top spot after beating Ballyboden St. Endas D on a 8-10 to 1-02 scoreline. Wild Geese couldn’t field a side so conceded their game to Ballinteer St. Johns C.