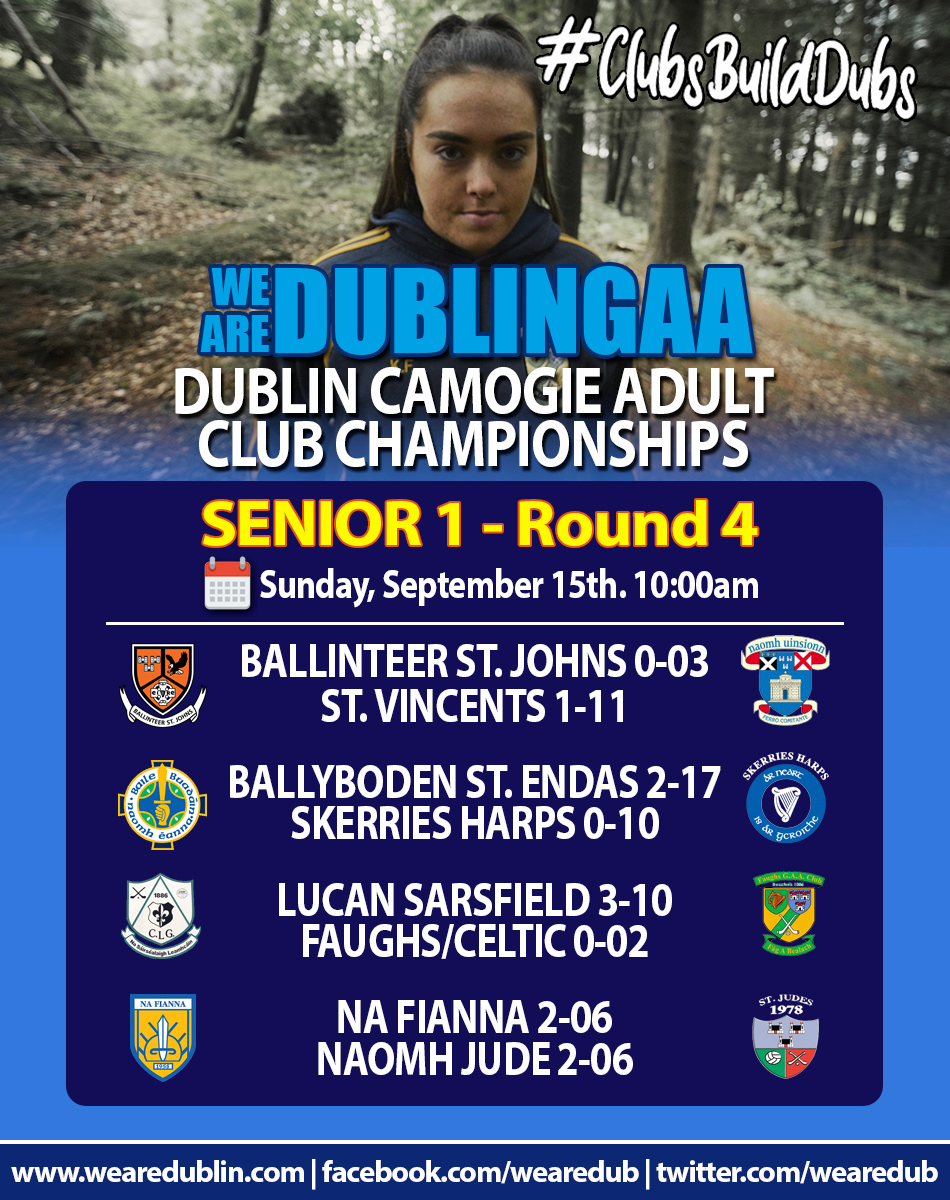 Dublin football fans were waking up yesterday morning pinching themselves after unbelievable scenes in Croke park. Jim Gavin’s Senior Footballers did the previously impossible task and retained the Sam Maguire for the fifth consecutive season.

But for some it was an early start to their morning as 10am saw a massive card of games take place in the We Are Dublin GAA / Dublin Camogie Adult Club Championships. Fifteen games in total were played across the various competition grades and we have all the results right here.

St. Vincents continue their impressive run of form with their fourth consecutive championship win. A 1-11 to 0-03 scoreline over Ballinteer St. John’s sees the on eight points and pulling away at the top of the Senior 1 table.

Sitting below them are Na Fianna and Naomh Jude. Their clash today ended in a 2-06 a piece drawn game. That leaves both teams on five points and dropping now to joint third.

Ballyboden St. Endas jump into second in the table after their 2-07 to 0-10 victory over Skerries Harps. Boden have now won their last three fixtures after losing to St. Vincents in their championship opener. 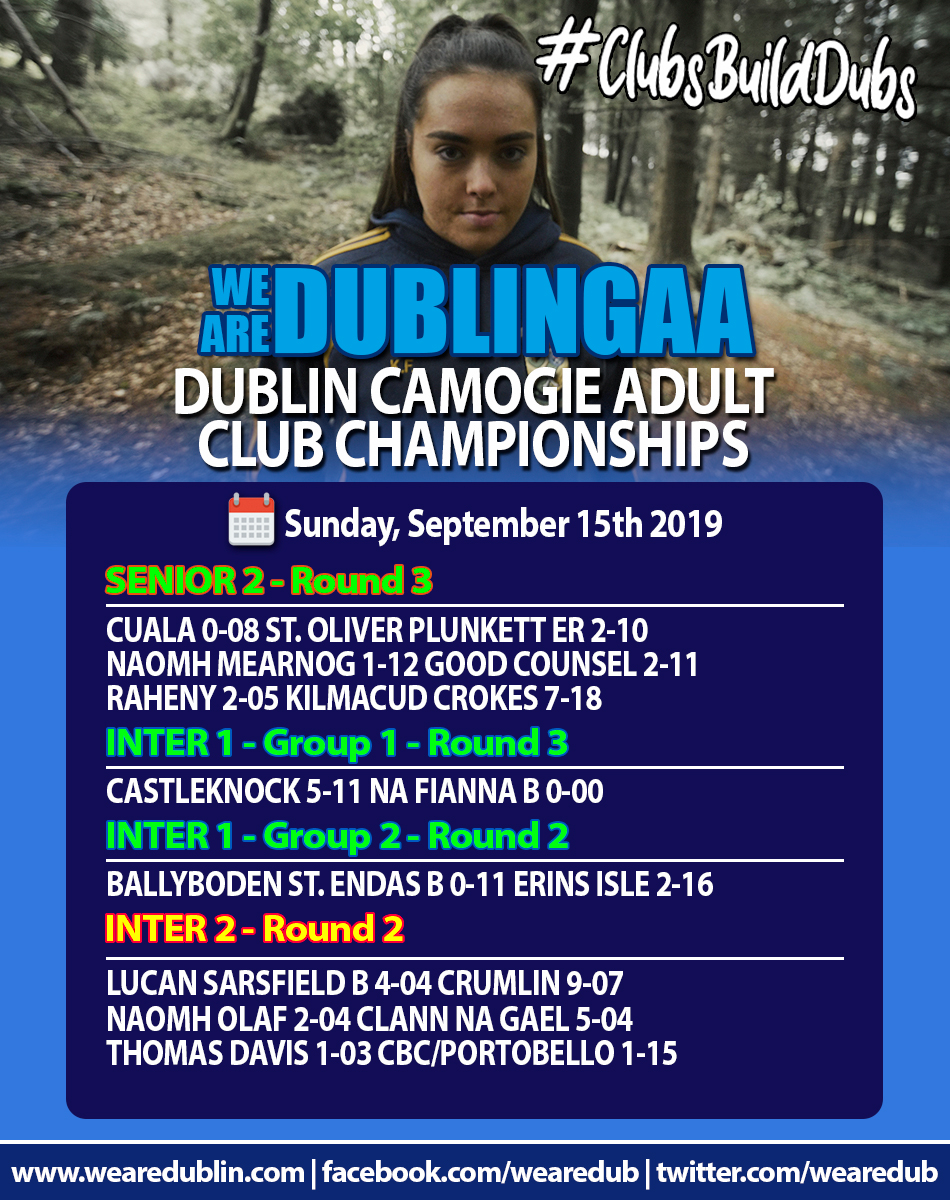 Kilmacud Crokes and Good Counsel have set up a exciting fixture next weekend. Both are three for three in the Senior 2 Competition. Good Counsel were two point winners over Naomh Mearnog yesterday on a 2-11 to 1-12 scoreline. Kilmacud Crokes put in a massive result over Raheny on 7-18 to 2-05.

St. Oliver Plunkett Eoghan Ruadh picked up a valuable two points over Cuala yesterday by 2-10 to 0-08. As both Plunketts and Raheny have already played their Round 4 fixture they have no game this weekend.

With Naomh Brid on a bye in Group 1, Castleknock took the opportunity to make up ground on them yesterday. Their 5-11 to 0-00 win sees them draw level on points but well ahead on score difference.

In Group 2 Erins Isle take the top spot following their second championship win. Their 2-16 to 0-11 victory sees them two points clear of Naomh Padraig. But Pats head for St. Vincents this weekend and could go level if they put in a big score.

Elsewhere Crumlin got their first win in the championship with a 9-07 to 4-04 victory over Lucan Sarsfield D. 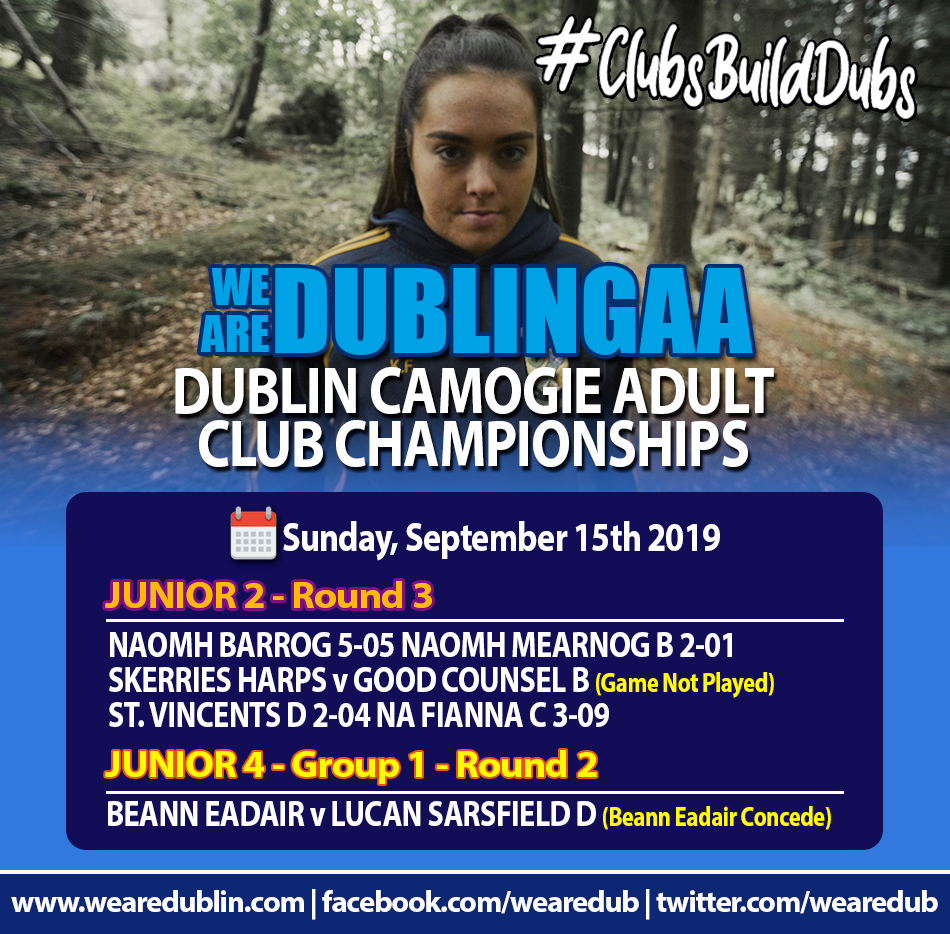 With Skerries and Good Counsel B’s game not played it see Naomh Barrog taking to top spot in the Junior 2 Grade. They were 5-05 to 2-01 winners over Naomh Mearnog B. Barrogs play Skerries next this weekend in what should be an entertaining encounter.

Na Fianna got their first win in three games with a 3-09 to 2-04 victory over St. Vincents D. They play Naomh Mearnog B this weekend while Vincents welcome Good Counsel B.

NO CHANGES FOR DUBLIN AHEAD OF GALWAY GAME