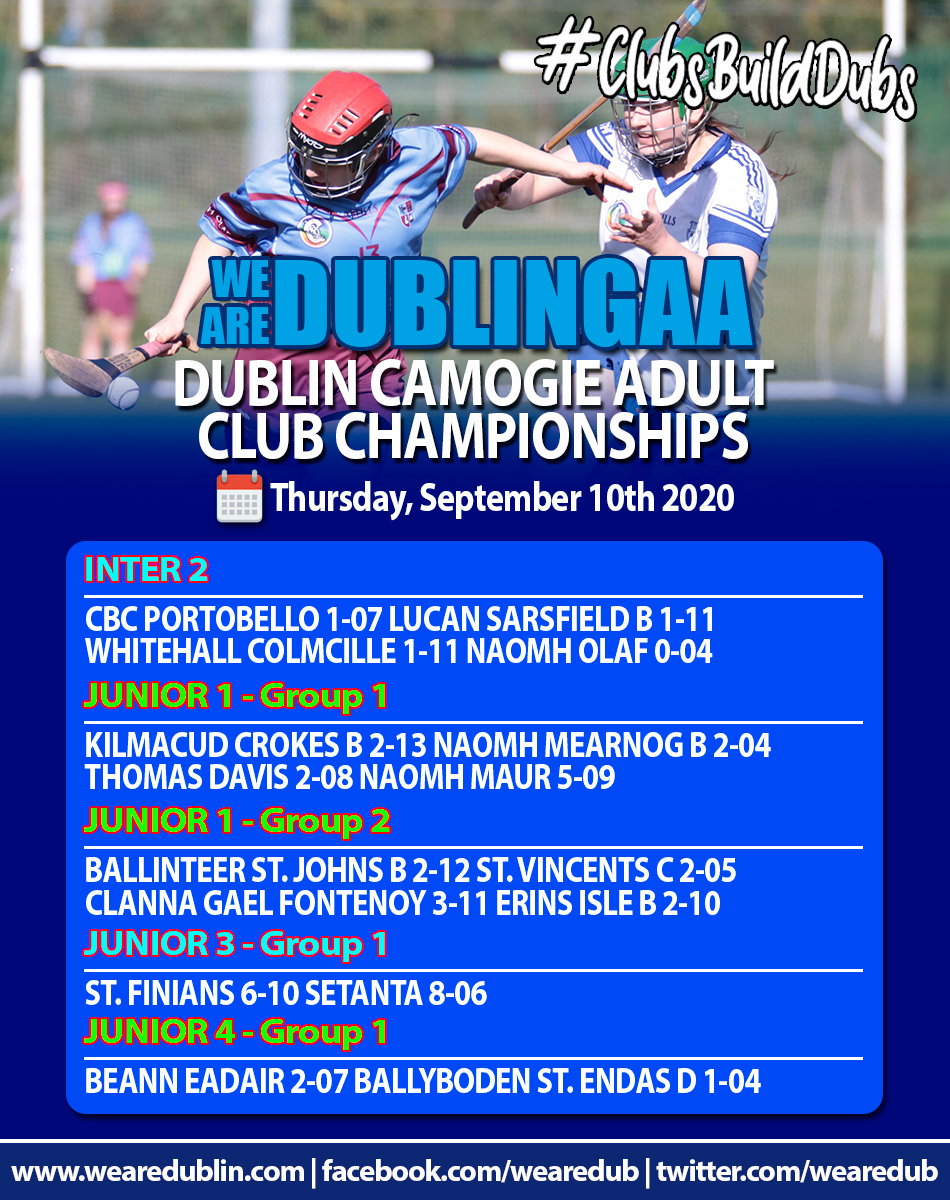 It’s hard to believe that the journey through the 2020 We Are Dublin GAA Dublin Camogie Adult Club Championships only began on August 9th. We’ve already crowned two champions, and tonight we see the Round Robin phase in the remaining competitions come to a close. And that means over the next couple of weeks we’ll have plenty of kock out action to look forward to. But let’s get you up to speed on tonight’s action.

Whitehall Colmcille secure their slot in the Inter 2 Camogie final tonight after a 1-11 to 0-04 win over Naomh Olaf. They’ll face Ballyboden St. Endas B who had already secured their place with four wins from four.

In the battle between CBC/Portobello and Lucan Sarsfield B, it was Lucan who came out on top winning by 1-11 to 1-07.

So the Inter 2 Final will be between Ballyboden St. Endas B and Whitehall Colmcille and we’ll bring you the details once confirmed.

Kilmacud Crokes B and Naomh Maur qualify from Group 1 for the Junior 1 Championship Semi Finals at the end of the round robin phase. Crokes were 2-13 to 2-04 victors over naomh Mearnog B, completing a clear round of games. Naomh Maur picked up their third win from four tonight beating Thomas Davis by 5-09 to 2-08.

In Group 2 St. Vincents C and Naomh Barrog come out as Semi Final qualifiers. Despite losing tonight to Ballinteer St. Johns B by 2-12 to 2-05, Vincents had already done enough to go through on score difference. Heartbreaking for Ballinteer as they didn’t score enough to overtake Naomh Barrog, who were on their bye tonight.

In the remaining game in Group 2 Clanna Gael Fontenoy were victorious over Erins Isle B this evening on a 3-11 to 2-10 scoreline.

Quite the game tonight between St. Finians and Setanta in the last Group 1 picture tonight, as we expected it to be. And it’s Setanta who come out on top on a 8-06 to 6-10 scoreline. After a fourteen goal thriller only two points seperated the sides. It means Setanta secure the top spot and Finians lose out the Naomh Brid for that second qualifying slot.

They join Cuala B and Ballyboden St. Endas C in the Semi Finals who had already completed the round competition earlier this week.

Regardless of whether tonight’s game between Beann Eadair and Ballyboden St. Endas made no difference to the Group 1 table, Beann Eadair picked up their second and final win in the competition, beating Boden by 2-07 to 1-04. Boden still finish in second position taking the last of the semi final slots.