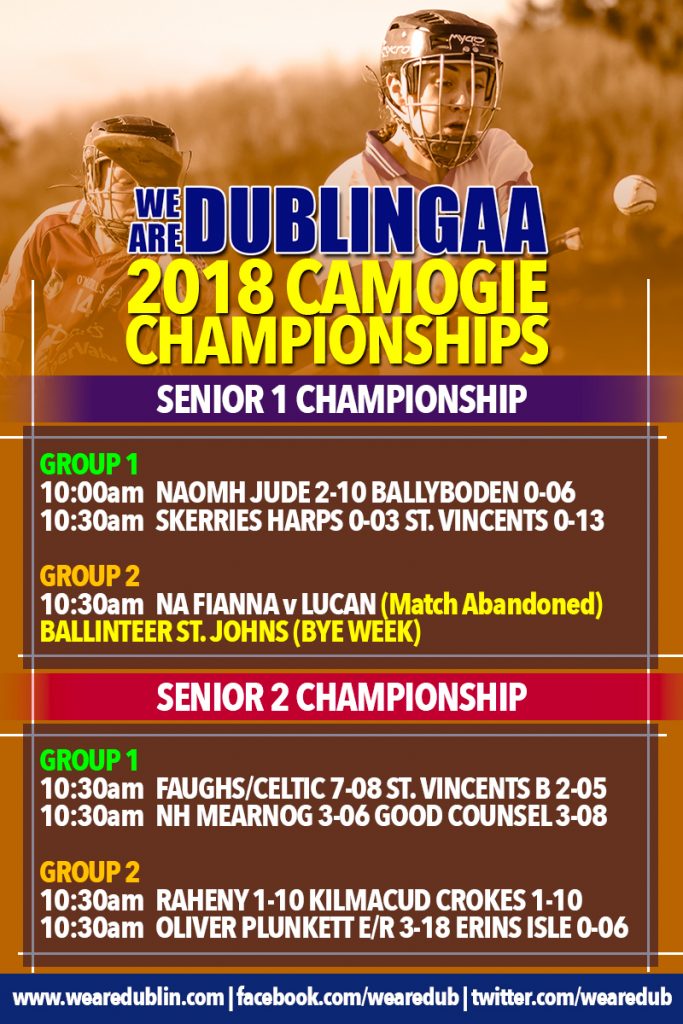 This weekend saw the last round of the We Are Dublin GAA Senior Camogie Championship. And with just a couple of rescheduled games to be played out we can see how things are shaping up for the knockout stages.

A 0-13 to 0-03 win over Skerries Harps saw reigning champions St. Vincents finish top of Group 1, following earlier victories over both Ballyboden St. Endas and Naomh Jude. Jude’s finish just behind them in the group table after seeing off Ballyboden St. Endas on Sunday on a 2-10 to 0-06 scoreline.

The group decider between Na Fianna and Lucan Sarsfields has be rescheduled for tomorrow night from Sunday and the winner will top Group 2. Both sides got a win over Ballinteer St. John’s and tomorrow night will tell us who finished first and who finishes second place.

This Sunday, October 7th the semi finals in both the Championship and Shield competitions will take place.

With Group 1 decided we know that St. Vincents and Naomh Jude are semi finalists. We also know Na Fianna and Lucan Sarsfields will come out of Group 2 but tomorrow’s game will decide who they will face on Sunday

In the Shield competition, Skerries Harps have a bye straight into the final and will play the winner of the game between Ballinteer St. John’s and Ballyboden St. Endas

St. Vincents B and Naomh Mearnog play their rescheduled Round 1 game tomorrow night, but we already know that Good Counsel and Faughs/Celtic are winners and runners up in Group 1. Counsel went three straight wins over the three sides, with their win over Faughs leaving them in second. Mearnog’s and Vincents B will play to decide who’ll they’ll play in the Shield Semi Final.

St. Oliver Plunkett Eoghan Ruadh made it three for three with their win over Erins Isle on Sunday and they top the group going into the knockouts. Kilmacud Crokes drew against Raheny leaving them both level on 3 points but with Crokes having the better score difference, they come out of the group in second and Raheny go into the Shield competition.

Like the Senior 1 competition, the Championship and Shield Semi Finals will all take place this Sunday, October 7th.

As winners and runners up in both groups have been decided, we only need to see the result of tomorrow’s game between St. Vincents B and Naomh Mearnog to find out who’ll they’ll both be playing in the Shield Semi Final.