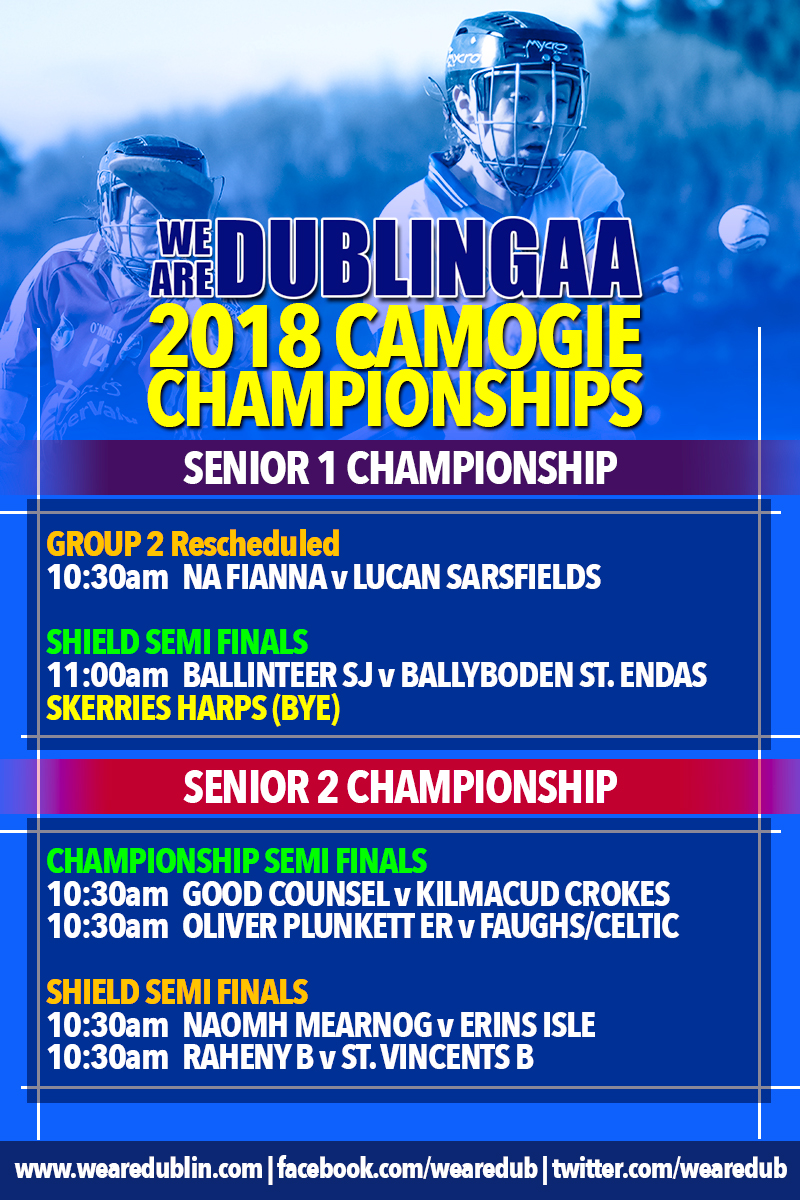 There’s literally only a couple of weeks left in this years We Are Dublin Senior Camogie Championships. And this weekend there are some massive games across the senior 1 and senior 2 competitions.  So without further ado, let’s bring you up to speed with the details.

There is still one game outstanding in Group 2 of this year’s Senior 1 competition. Originally abandoned last Sunday, and rescheduled for earlier this week, the round game between Na Fianna and Lucan Sarsfields will go ahead this Sunday at 10:30am. And it’s quite an important game as the winners will top Group 2 and face Naomh Jude in the Senior 1 Semi Final, with the loser facing Group 1 Winners St. Vincents. Both teams are already in the last four but it’s about who they’ll face.

Only one Semi Final up for contention as Skerries Harps have already advanced to the Shield Final. Ballinteer St. John’s and Ballyboden St. Endas will square off for that other Final slot. Both sides lost two group games each so they’ll be looking to finish the year on a positive note. Throw in at Ballinteer is down for 11:00am

The best four sides in the Senior 2 Championship will battle it out the make this year’s Final. Group 1 Winners Good Counsel will face Group 2 Runners Up Kilmacud Crokes. And Group 2 Winners St. Oliver Plunkett Eoghan Ruadh will face Group 1 Runners Up Faughs/Celtic.

In a very competitive competition this year, Good Counsel went unbeaten over three games in Group 1, beating Faughs, St. Vincents B and Naomh Mearnog. Faughs/Celtic took second slot after their opening day defeat to Counsel. In Group 2, it was Plunketts who finished with the 100% record. they saw off the challenge of Raheny, Kilmacud Crokes and Erins Isle to top the group. Crokes finished level on points with Raheny after the played out a draw in the final round last week. But Kilmacud had the better score advantage that sent them through to the semi finals.

Both games will throw in at 10:30am this Sunday morning.

While the remaining teams didn’t make the Championship Semi Finals, there’s still a Shield to play for and Naomh Mearnog, Erins Isle, Raheny and St. Vincents B will all play with pride this weekend to decide which two sides will contest the Shield Final for 2018.