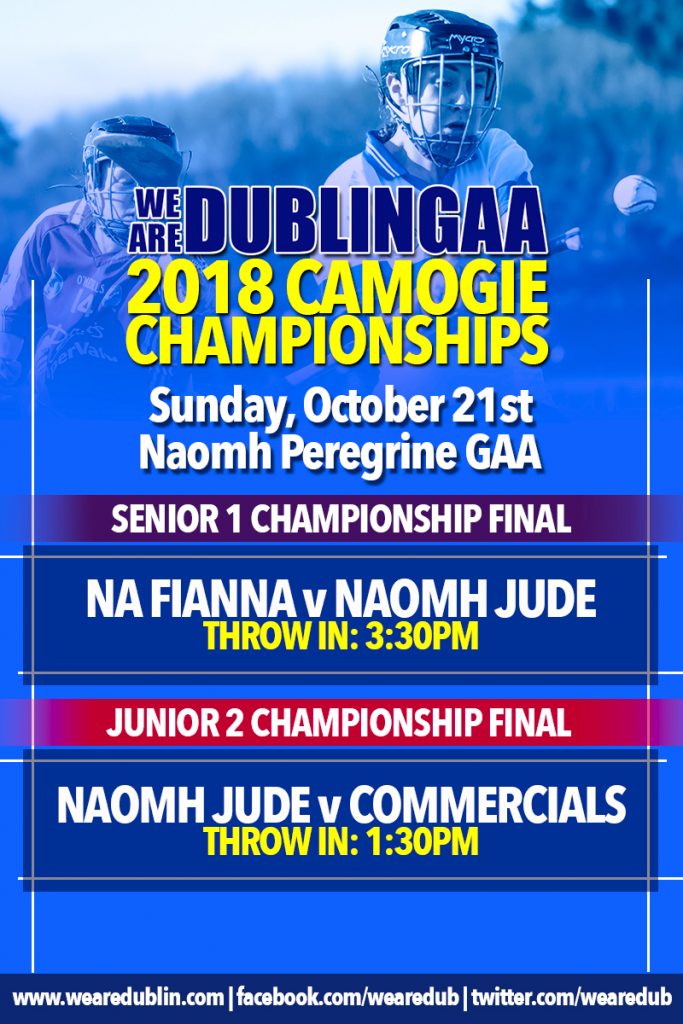 It’s probably the biggest weekend in the We Are Dublin GAA Camogie Championship calendar. And the Senior 1 Championship final will take centre stage in Peregrines GAA Club, along with this year’s Junior 2 Camogie Final. St. Judes are in a very honourable position having a team in both finals. But it’s extra special that they are contesting a Senior 1 Championship finals as they are still relatively new to the grade. In addition this weekend is massive for their opponents who’ve been knocking on the door for a number of years, and have finally reached the Championship Final.

The winner will become new We Are Dublin GAA Senior Camogie champions for 2018 and will go on and represent Dublin Camogie in the Leinster Championship, and hopefully the All Ireland competition.

Na Fianna have climbed the mountain and there’s only one peak left to reach the summit and claim that elusive Senior 1 title. They faced reigning champions St. Vincents in the Semi Final, a team they know only too well. And after last year’s Championship Final heartache, they got across the line in the dying stages of the game, with an Eve O’Brien goal to snatch victory by a point. the Mobhi Road girls finished behind Lucan in the Group 1 competition, but their 3-11 to 0-07 win over Ballinteer St. John’s earned them a last four spot.

What a day Sunday will be for  Naomh Jude. Only their second season as a Senior 1 team and they’re contesting for the grandest prize of the all. The 2016 Senior 2 Champions started their campaign with a loss to Vincents, but steadied the ship and notched up massive wins over Skerries and Ballyboden St. Endas to advance to the Semi Finals. There, they met the 2016 beaten finalists Lucan Sarsfields. But Judes on the day brought their A game, and on a 0-17 to 1-07 scoreline they comfortably earned their final slot.

It’s the Group 1 winners versus the Group 1 runners up in this year’s Junior 2 Championship Final. And yet another final appearance by a Judes team. The B team went two for two over Commercials and Na Fianna’s C team to top the group setting up a semi final against Group 2 runners up Good Counsel B. But Judes were too strong an opponent for the Counsel girls and ran out 3-08 to 1-00 winners last weekend.

Commercials finished behind Judes in the Group 1 table and had the task of squaring off against Group 2 winners Naomh Barrog who came into the semi final unbeaten. with plenty of goals for both sides, three points seperated the teams at the final whistle with Commercials advancing on a score of 2-07 to 2-04.

You can guaranteed this Junior 2 Final will be too close to call and is the perfect curtain raiser for this year’s Senior 1 title.

Both games are being played this year in St. Peregrines GAA. Admission on Sunday is €10.00 for Adults, which includes the match programme. Students and OAP admission is €5.00. Children U16 can come along to game for free, once accompanied by an adult.

Make sure not to miss these games. You’ll regret it.

We Are Dublin GAA Inter And Junior Camogie Championships