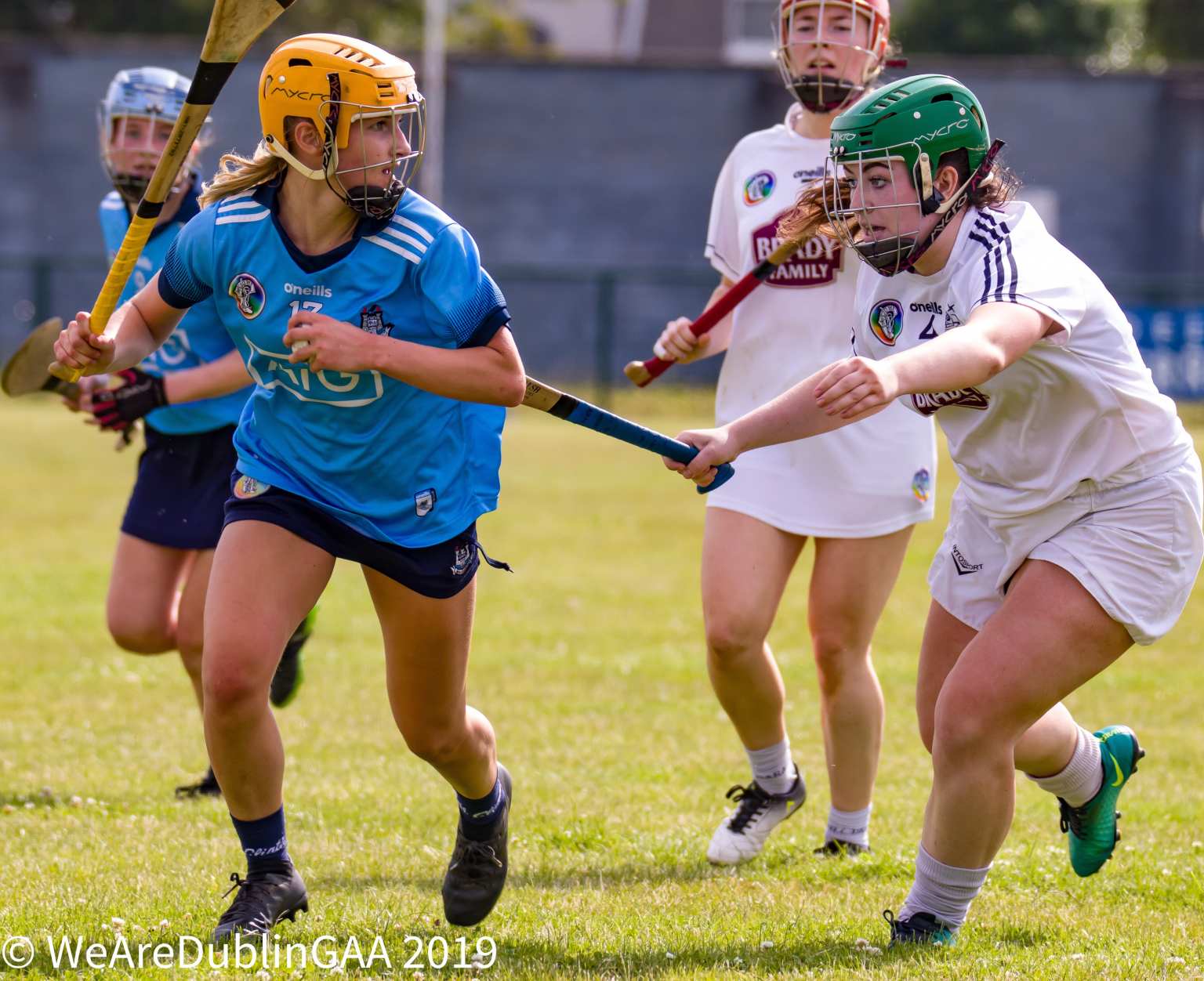 Two excellent second half goals from live wire forward Gaby Couch propelled the Dublin Intermediate Camogie team to an first win at the grade in championship.

Gaby wasn’t the only star of the show as the win was built on a whole team effort full of excellent link play, movement, running off the shoulder and a huge work rate.

Dublin got off to a great start and opened up a three point to no score lead inside the opening six minutes with two converted frees from Cliodhna Nicoletti and a fine point from play from the impressive Alix Buckley.

Kildare were struggling to contain a Dublin side full of running and accurate passing and interplay.

Dublin were awarded a penalty in the 10th minute after great play from Mary Cronin whonwas fouled in the square. The decision though was a strange one as the whistle didn’t blow till after Cronin had knocked the ball into the back of the net.

So much for advantage, with three players allowed on the line for penalty’s the advantage had actually switched to the transgressors Kildare.

And so it proved as Alix Buckley’s well struck shot was saved on the line and Kildare cleared their lines.

Dublin responded positively to the saved penalty with two points in as many minutes from Aoife Whelan to push further ahead.

The Lilywhites finally got their first score of the game in the twelfth minute with a converted free from Siobhan Hurley and like buses another followed seconds later this time from open play scored by Fiona Trant.

Two Gaby Couch points sandwiched a converted free from Siobhan Hurley and one from play by Caoimhe Shiels for Kildare.

Another successful free from Hurley cut the deficit but Kildare were dealt a blow when they were reduced to 14 as Aine O’Neill who was yellow carded earlier in the half for the foul that resulted in the penalty was shown a second yellow and subsequent red card with two minutes to the break.

Dublin had the last say of the half with a sublime point from Emma Johnson to take a three point lead into the dressing room at the break with the score 0-08 to 0-05.

Kildare came out in the second half needing early scores and they reduced the deficit to just one point with two Siobhan Hurley points both from frees.

Not to be outdone by her sister, Dublin midfielder Jody Couch got in on the scoring act with a fine point. But another successful free attempt from Hurley put just the bare minimum between the sides again.

But as the old saying goes goals win games and the proof was in the pudding today.

With sixteen minutes left in the game Gaby Couch put Dublin in a commanding position with her two goals in quick succession.

The finish for the first goal was impressive enough but Gaby’s finish for her second goal was even better.

Dublin won the subsequent puck-out from the first goal, a long high ball was launched towards the square, Gaby as all good forwards should do followed the ball in.

Couch one of the smallest players in height on the pitch leapt unbelievably high in the air that it looked like she had springs in her feet and although the Kildare keeper collided with her in mid-air Gaby buried the ball to the net.

And when Mary Cronin who had a fantastic game popped over a beauty of a point two minutes later it was game, set and match for Dublin.

Kildare were now solely relying on the dead ball accuracy of Siobhan Hurley for scores, she knocked one over with 13 minutes to go.

But Dublin have their own sharpshooter in the form of Cliodhna Nicolletti who pointed two in a row of her own. Emma Johnson added a fine effort over the black spot after a worked move by Dublin.

Two more Siobhan Hurley frees reduced Dublin’s lead to eight but just as they had done in the first half Dublin rounded off the scoring with a super point from Alix Buckley.