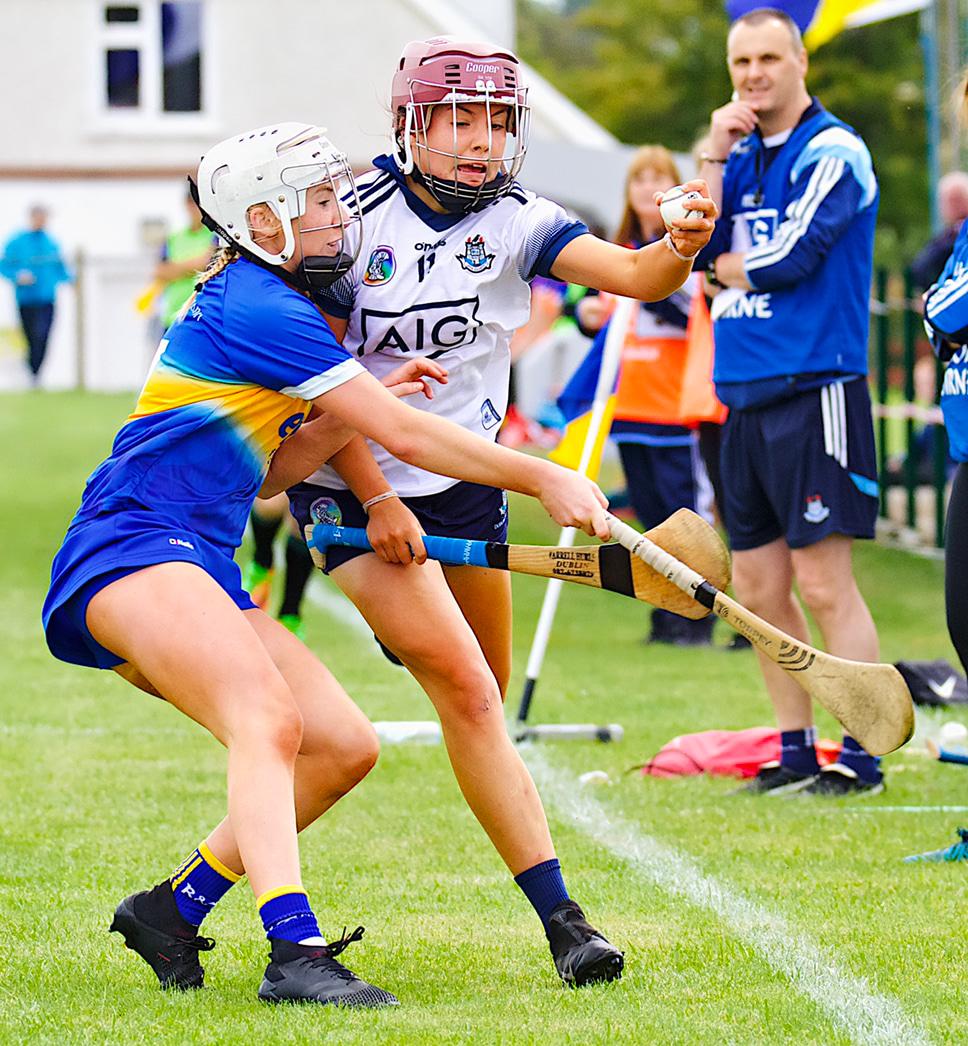 There’s been many a disappointing trip to The Ragg in Thurles over the years for Dublin Camogie teams, but not today. John O’Connell’s Dublin Minors were comfortable and dominant victors as the visiting side against Tipperary. And that win gifts them a place in the draw for the knock out stages of the Tesco All Ireland Championship.

Dublin’s front six were in tune and on song this afternoon. But it was the late addition of Aisling O’Neill that completed the winning formala. The Castleknock youngster’s two goals and five points inspired the girls in blue in an impressive opening quarter that allowed the side to control proceedings and coast for large patches of the game.

Ahead by nine scores at the second half water break, Dublin re-applied the pressure for the finish outscoring Tipperary by 0-09 to 0-04. The concise free taking of Ellie Young, who bagged 0-07 in the game, launched Dublin back into action. Substitutes Grace Shanahan and Sinead Daly added a brace before Laura Leenane broke the momentum, but only temporarily.

Young negotiated two more dead balls as Dublin headed for the finish line. Half forward Annabelle Timothy sent over an impressive score after a second from Leenane. O’Neill was rewarded with Dublin’s final score of the game after Young had closed out her tally with another brace, overshadowing Grace Moloney’s last score for Tipp. And it capped off a fourteen point victory on the road that takes them into the mix of the business end.

Within seven minutes of the first half throw in, the Dublin Minors had displayed their intent on qualifying for the next phase of this competition. A 1-06 to 0-02 lead had flashed on The Ragg scoreboard before Tipperary were rewarded and despatched a penalty for a foul on Eva O’Dwyer. Eabha Mooney nearly spoiled Tipp’s party stretching to stop Laura Leenane’s shot but it found the net.

Aine Rafter (2), and O’Neill had 0-03 on the board before a well worked solo move from O’Neill beat Kacey Meehan to put Dublin 1-03 in front. Young converted the first of her seven scores before Aoife O’Dwyer got Tipp off the mark with only 4 minutes played.

O’Neill was proving impossible to mark as she shot another two scores, one either side a Grace Moloney effort for the home side. But the gap was cut to 0-03 as Lisa O’Connor grabbed a vital score following Leenane’s penalty conversion. With minutes to go before the first half water break Dublin found the space and movement they needed to shift the gears and blow the competition open.

Rafter picked up were O’Neill left off finding the net for Dublin’s second green flag, with points either side. And when O’Neill grabbed her second goal just before the first half water break it allowed the breathing space needed to dominate the game with a 0-10 lead that Tipperary hardly chipped away at for the remainder of the fixture.

Tipp were forced to use four of their eight substitutes in the first half, none of which seemed to create the impact needed for the home side. The Dublin Minors were comfortable breaking down any attack imposed on them. And in a relatively quiet end to the half Ava Lambe and Timothy just added more scores to the board to set up the control needed to orchestrate the second half proceedings.