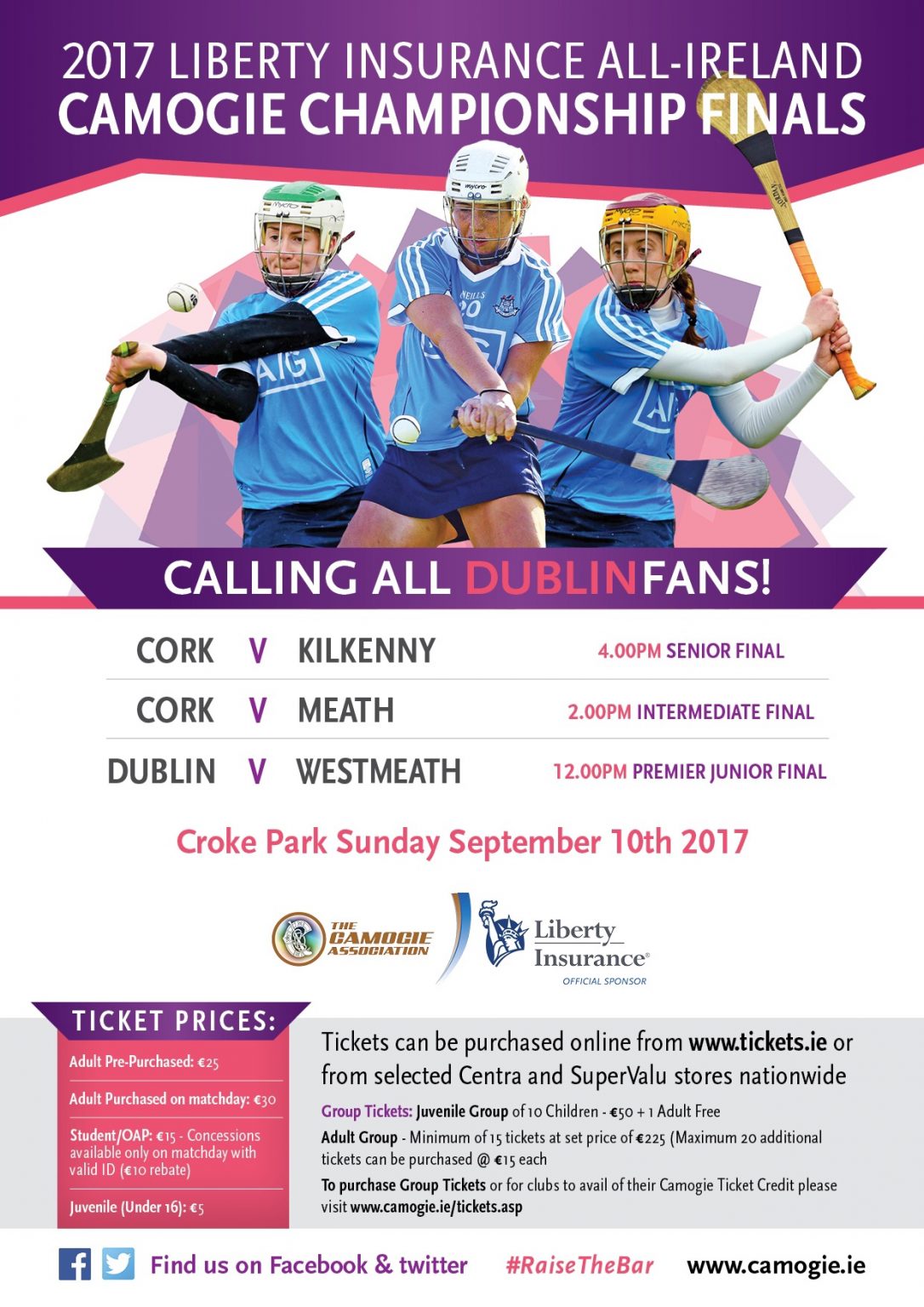 DUBLIN Camogie is on the crest of a wave right now. The Seniors, Minors and U16s all made All-Ireland Semi-Finals but the Premier Juniors took it one step further. The overall picture is one of blooming health in the Capital County.

Shane Plowman’s outfit took all before them in the League on the way to Division 3 honours but now they are crossing swords with a unit that played well in Division 2.

Indeed Westmeath only missed out on a place in the last four on score difference, finishing just five points worse off than Kildare, who also reached the Intermediate Semi-Final.

Indeed the Lakesiders defeated the Lilywhites in the round-robin phase as well as another Intermediate side Antrim, and only lost by a point to Galway.

Both had already qualified when they faced off in the final Group 1 game so it is difficult to know what to take from that. On face value, we can say that there will be a puck of the ball in this, as Westmeath prevailed by the minimum.

A goal from Evelyn Twomey seven minutes into the second half broke the Kerry resistance as Dublin moved to within 60 minutes of a sixth title at this grade with six points to spare. Aoife Bugler and skipper Emer Keenan will be among the players they will need to perform if they are to achieve it.

Dinah Loughlin, Pamela Greville and Denise McGrath stood out once more for Westmeath, although they had a couple of anxious moments as last year’s runners-up Armagh launched a late rally and closed to within a point by the time the final whistle was blown.

They are pursuing their first Premier Junior Championship, having established themselves in recent years following their Junior A success in 2012.

MEATH are appearing in their first Intermediate Final, while Cork are returning to the scene of the crime after being edged out by a point by Kilkenny in last year’s deciding outcome.

It has taken the Royals a little while to establish themselves in the second tier after enjoying Croke Park glory when annexing the Premier Junior crown in 2012.

They showed that they had found their feet when winning the National League Division 2 title last season however and spent the spring this term in the rarefied atmosphere of Division 1.

There were some tough outings as they failed to collect anything in terms of points but the experience of operating at a quicker level and higher intensity than anything they would have been accustomed to was invaluable.

John Davis’ crew finished the campaign positively, losing by just two points to Offaly, who missed out on making the knockout stages of the Senior Championship on score difference by one point.

Meath carried that form right through the Championship. Although drawing to Down, they had earlier edged out Cork in a cracker by 3-9 to 0-17 in Trim, assuring themselves of top seeding in the Semi-Finals.

There the Royals met old rivals Kildare. Buoyed by a quick goal from Kristina Troy and a strong final quarter that yielded seven successive points after falling two points behind, they were able to concede a late goal and still prevail by two.

Jane Dolan has long been acknowledged as one of the most dangerous forwards in the land but she has strong support in the likes of Troy, Megan Thynne, Aoife Minogue and Cheyenne O’Brien.

Cork will be concerned by the three goals they conceded when the sides met on July 8th but apart from that, they have enjoyed a flawless season. The League ended with a 14-point defeat of Derry and they repeated that win over a side that had been campaigning in the top tier for the previous four years in the Championship Semi-Final.

The margin this time around was 10 points. Linda Collins, who scored 1-5 from play in last year’s All-Ireland and played along with Jennifer Barry in this year’s National League Division 1 decider, did the damage with two goals.

Finola Neville, Lauren Callanan and Amy Lee are just some of the others with Senior experience. Keeva McCarthy and Maeve McCarthy are other threatening attackers capable of scuppering Meath’s dreams.

THIS is a repeat of last year’s decider in which Kilkenny put paid to Cork’s three-in-a-row bid with a four-point victory, and of the National League Division 1 Final, which went the Noresiders’ way too.

There were just three points separating them at Semple Stadium but just as in September, the sense was that the victors were more comfortable than the margin suggested.

Add the fact that they are now one step from a fourth consecutive national title, a ‘Double-Double’, and there is no doubt that Ann Downey’s side have established themselves firmly as the undisputed number one outfit of the game.

That will rankle with Cork, not least because they have failed to sparkle in those last two major clashes, due to a combination of Kilkenny’s quality and their own underperformance. Being accustomed to a place on the top step of the podium, they will want it back.

Neither side pulled up trees in their Semi-Finals. A portion of this can be accredited to the longer lay-offs (five weeks for Cork, four for Kilkenny) compared to facing teams buoyed by Quarter-Final triumphs a fortnight previously but it would be wrong to minimise the efforts of the players and managements of both Dublin and Galway in terms of performance and tactical application.

Kilkenny did not have it all their own way in the group phase, needing a point from 2016 Player of the Year Denise Gaule to escape with a share of the spoils against Clare in Nowlan Park on July 1st.

As has been customary under a management set-up that has always learned lessons from mild setbacks, and a roster that has applied them well, they came out the next week and were full value for a five-point win over Galway in Athenry that helped cement their direct progress to the last four.

They got off to a perfect start against Dublin with a goal from a penalty by Gaule two minutes in, but were still only five points clear by the time substitute Jenny Clifford sent a rocket to the Dublin net in injury time, having struggled with the high intensity and physicality of the Metropolitans, and the direct running of the likes of Siobhán Kehoe.

The Stripeywomen’s much vaunted attack spluttered and there were only glimpses of the counter-attacking game from deep that has yielded such dividends.

Once more though, one expects that there will be an improvement and that Downey will be happier that her charges were put through the ringer rather than enjoying the cakewalk many had predicted.

The depth of the panel was advertised once more too with the continuing blossoming of newcomer Danielle Morrissey, and the impact off the bench of Clifford and Jenny Reddy.

Kilkenny have serious operators in every line, from Emma Kavanagh in goal, right through Anne Dalton, who was magnificent against Dublin, captain Anna Farrell, Katie Power, Gaule and Shelly Farrell to name just a few.Many of those will be smarting from quiet outings last time out and it is reasonable to expect a response.

Whereas the Cats ground it out in the second half in their Semi-Final, Cork were hanging on against Galway but this was always expected to be a stern challenge given the talent at the westerners’ disposal.

It said much therefore, that Cork were leading by eight points early in the second half and it could have been much more had they not spurned four goal chances.

What was notable too was that they found a way to win, as they have done so often over the years. Galway had all the momentum in the final quarter but Cork stemmed the tide, thanks to the likes of Chloe Sigerson, Rena Buckley and Ashling Thompson. Like Kilkenny, some stars did not enjoy their best of days but Hannah Looney and Niamh McCarthy stood up to the plate and Orla Cotter was exceptional in the first half in particular.Apart from the aforementioned, Aoife Murray and Katrina Mackey are key operators.

The message coming from the Cork camp all summer has been that they are playing catch-up on Kilkenny, even as they cruised through their group with a 100% record. Paudie Murray continued the theme after the Semi-Final but beating a team as strong as Galway after a five-week lay-off was no mean feat. Again, one can expect the engine to be running more smoothly on the biggest day of all.

Kilkenny’s hunger remains insatiable despite their recent success while Cork’s appetite is ravenous after some of the recent reverses. The teams play similar styles, attempting to cut off space in their own halves and to create it in the opposition’s, harnessing the speed at their disposal to fashion scoring opportunities.

What measures might be taken to neutralise the opposition strengths will be intriguing.