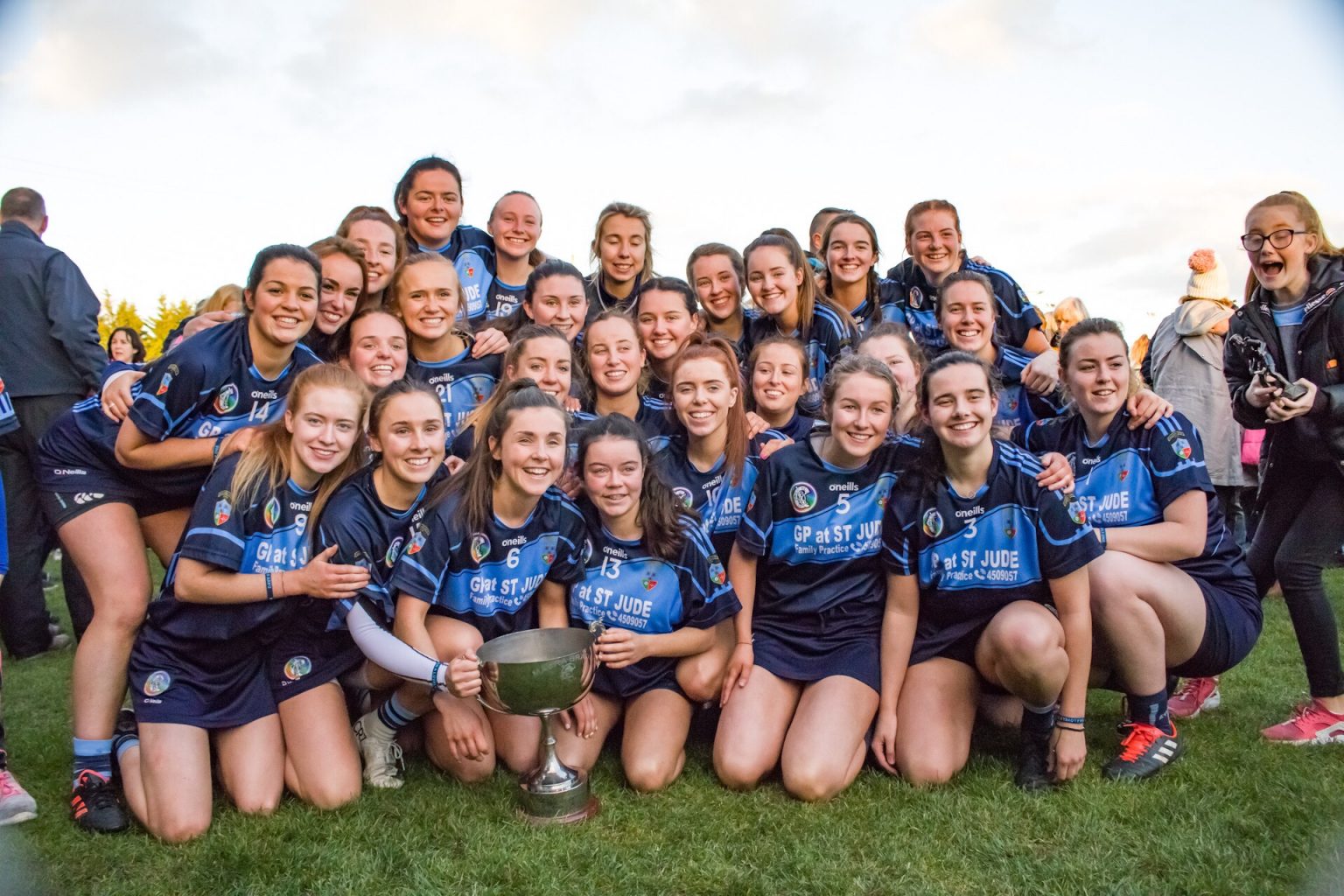 St Judes made a piece of history on Sunday afternoon by winning their maiden Dublin Camogie/ We Are Dublin GAA Senior 1 title against Na Fianna in St Peregrines GAAa Club.

There wasn’t a seat in the house to be had in the Blanchardstown venue, with the stand full supporters had to take every vantage point along the sidelines for what turned out to be a thrilling Senior 1 Final.

After a tight competitive first half Judes led by two at the break and the teams were level no fewer than four times in a rip roaring second half and it eventually took extra time to finally separate the teams in the end with Judes finishing the game the stronger of the two sides.

There was no quarter given by either team from the moment the ball was thrown in. Na Fianna took the lead in the sixth minute with a free from Niamh Rock.

By the 18th minute St Judes led by four after five unanswered points scored by Niamh Gannon with two, Carah Dawson, a 45’ from Sinead Nolan and a fine point by Hannah Begley. 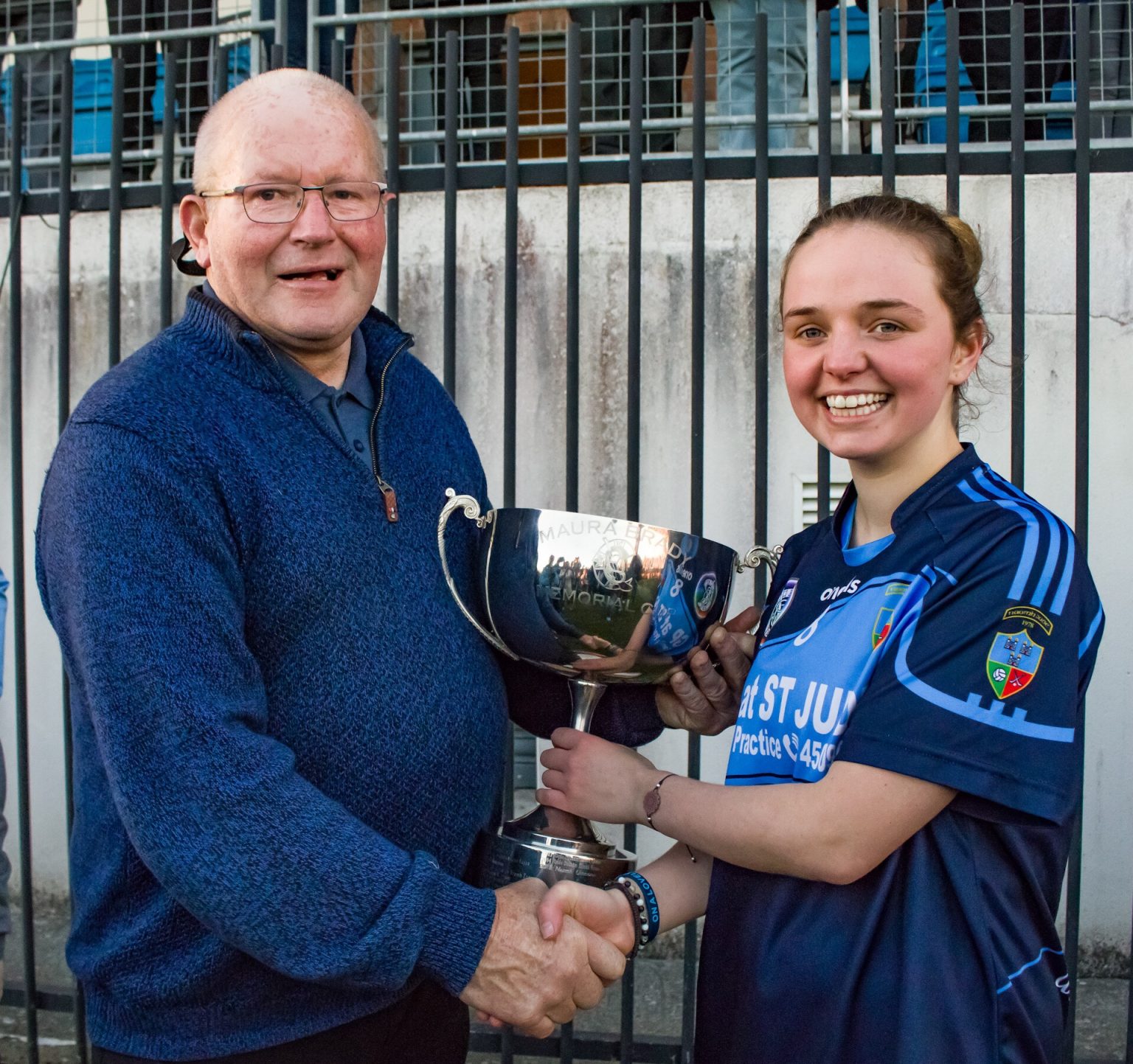 After a fourteen minute scoreless spell Na Fianna hit the next three points all from frees, two from Niamh Rock and the other from Orla Gray to leave the bare minimum between the teams.

St Judes were awarded a penalty in the final minute of the half, goalkeeper Faye McCarthy made her way up to the penalty spot but her well struck effort was saved on the line.

Judes got the final score of the half from a free scored by the ever accurate Sinead Nolan to leave the score at the break 0-06 to 0-04.

It was all level eight minutes into the second half with points from Zoe O’Donaghue and Emma Deeley as Na Finna started the second period in the front foot.

But the strong running from player of the match Leah Butler, Caragh Dawson, Maria Noone and Niamh Gannon was causing the Na Fianna backline problems and ultimately led to the concession of numerous frees which Judes Sinead Nolan and Faye McCarthy punished. 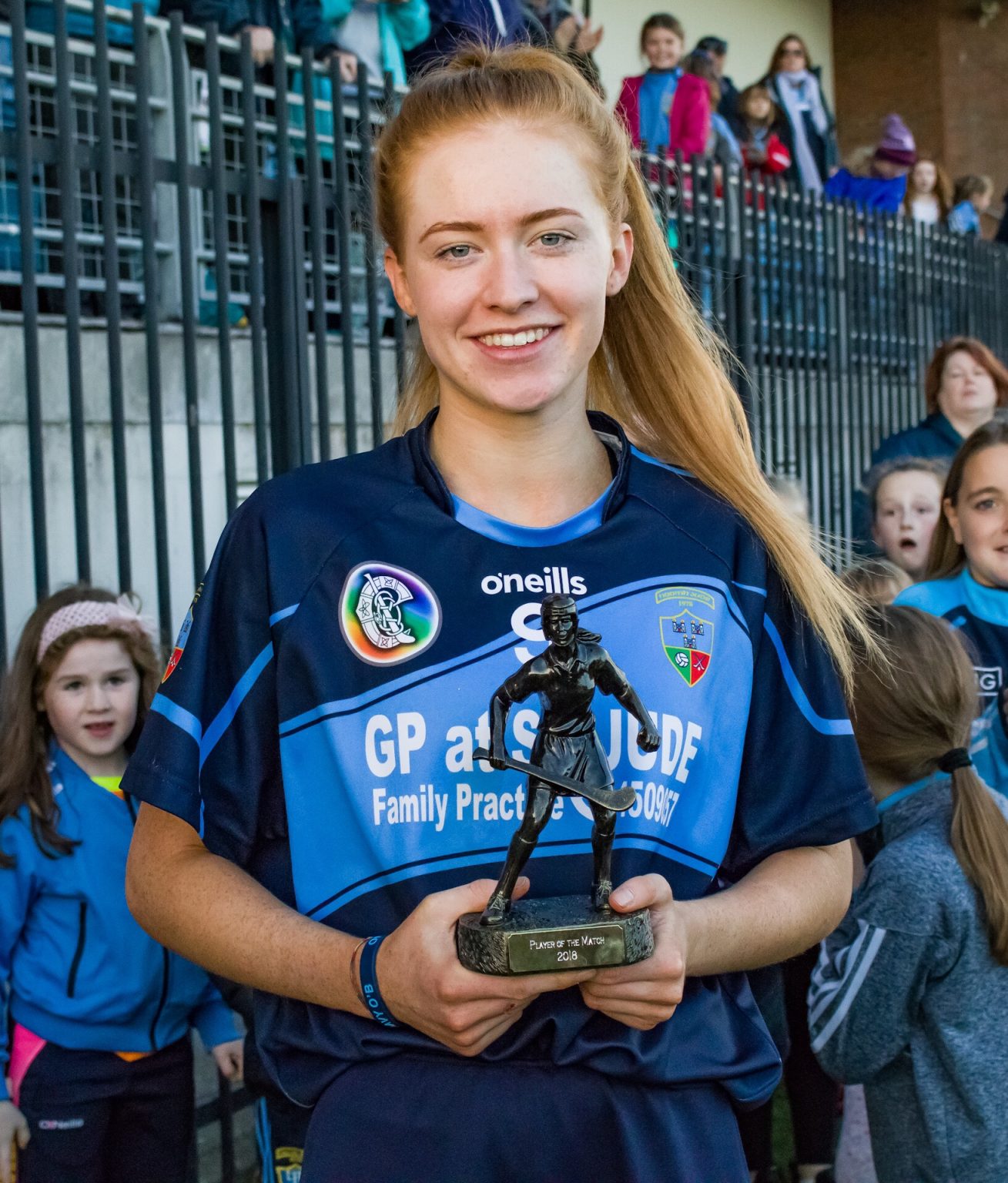 In the 40th minute the first of three frees in as many minutes was dispatched by McCarthy to put Judes back in front. Two more frees from Sinead Nolan pushed the lead out to three points.

It was all level again in the 46th minute when Elaine O’Meara got the final touch to the ball to flick it to the net after a good team move from Na Fianna and the destination of the Senior 1 title was still very much unclear.

With seven minutes remaining another Sinead Nolan free put Judes back in front as the excitement among the supporters reached fever pitch.

Na Fianna were awarded a free in the final minute of extra time which Niamh Rock scored to level it up again.

Two minutes into injury time it looked like Judes had won it when Faye McCarthy converted a long range free. 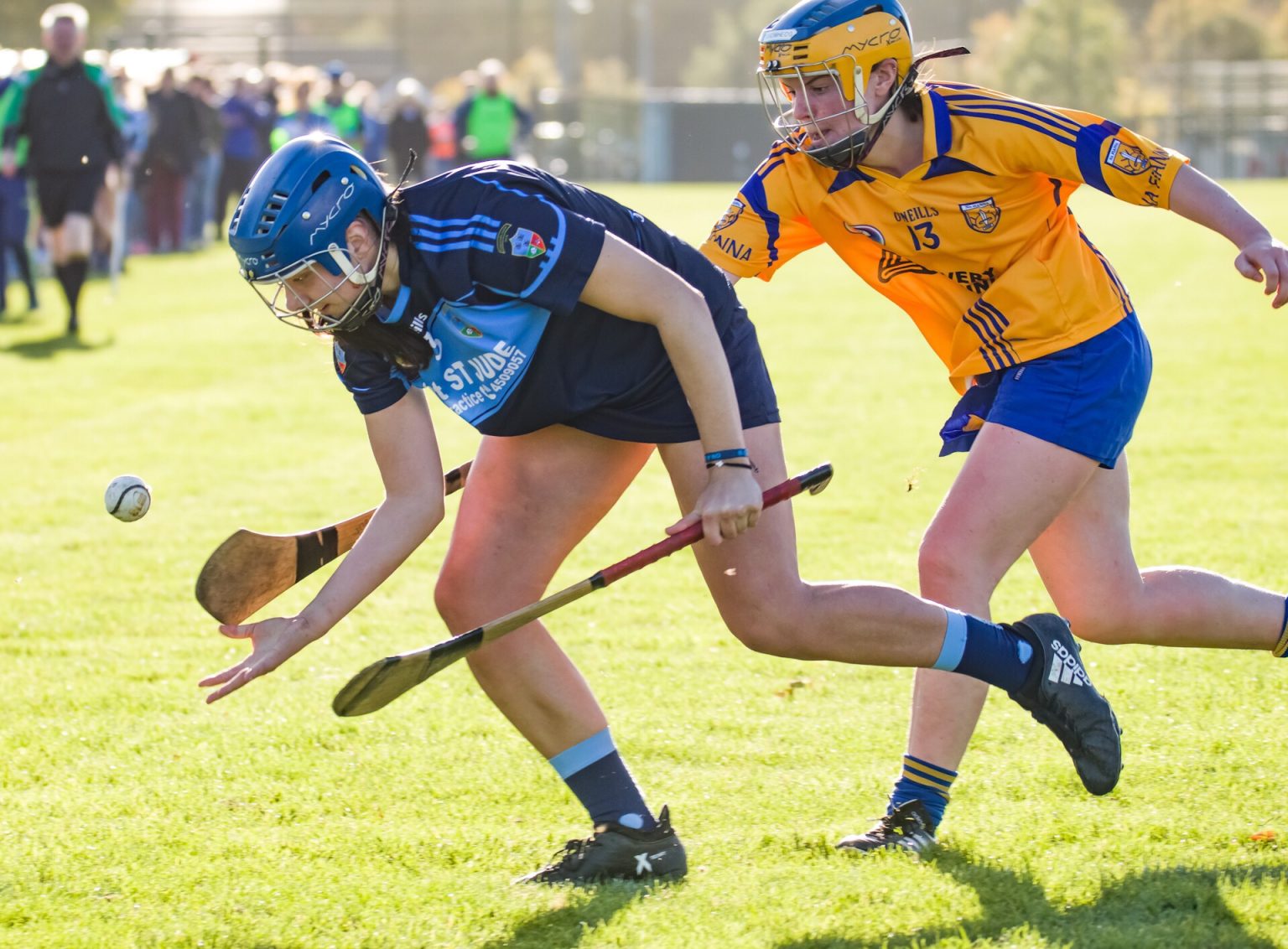 But the drama wasn’t over and in what turned out to be the final action of an absorbing sixty plus minutes Na Fianna were awarded a free, it looked a harsh call and brought a load chorus of boos from around the Blanchardstown venue from the large number of St Judes supporters.

Niamh Rock kept her nerve to steer the ball over the bar to draw the teams level yet again and the game headed for extra time and another twenty minutes of play to decide the winners with the score tied at 0-11 to 1-08.

It was Judes though who were the better side in extra time. Na Finna briefly took the lead in the second minute of the first half of extra time from a Niamh Rock free.

Judes though were still full of running and three quick fire points, a converted free from Sinead Nolan and two excellent points from play scored by Caragh Dawson and Aoife Walsh gave the side from Templeogue a two point advantage at the turn around with the score 0-14 to 1-09.

Not surprisingly a bit of fatigue effected both sides for the second half of extra time and there was only one score before the full time whistle a free from Faye McCarthy and St Judes deservedly over the course of the almost eighty minutes of play were crowned Senior 1 Champions. 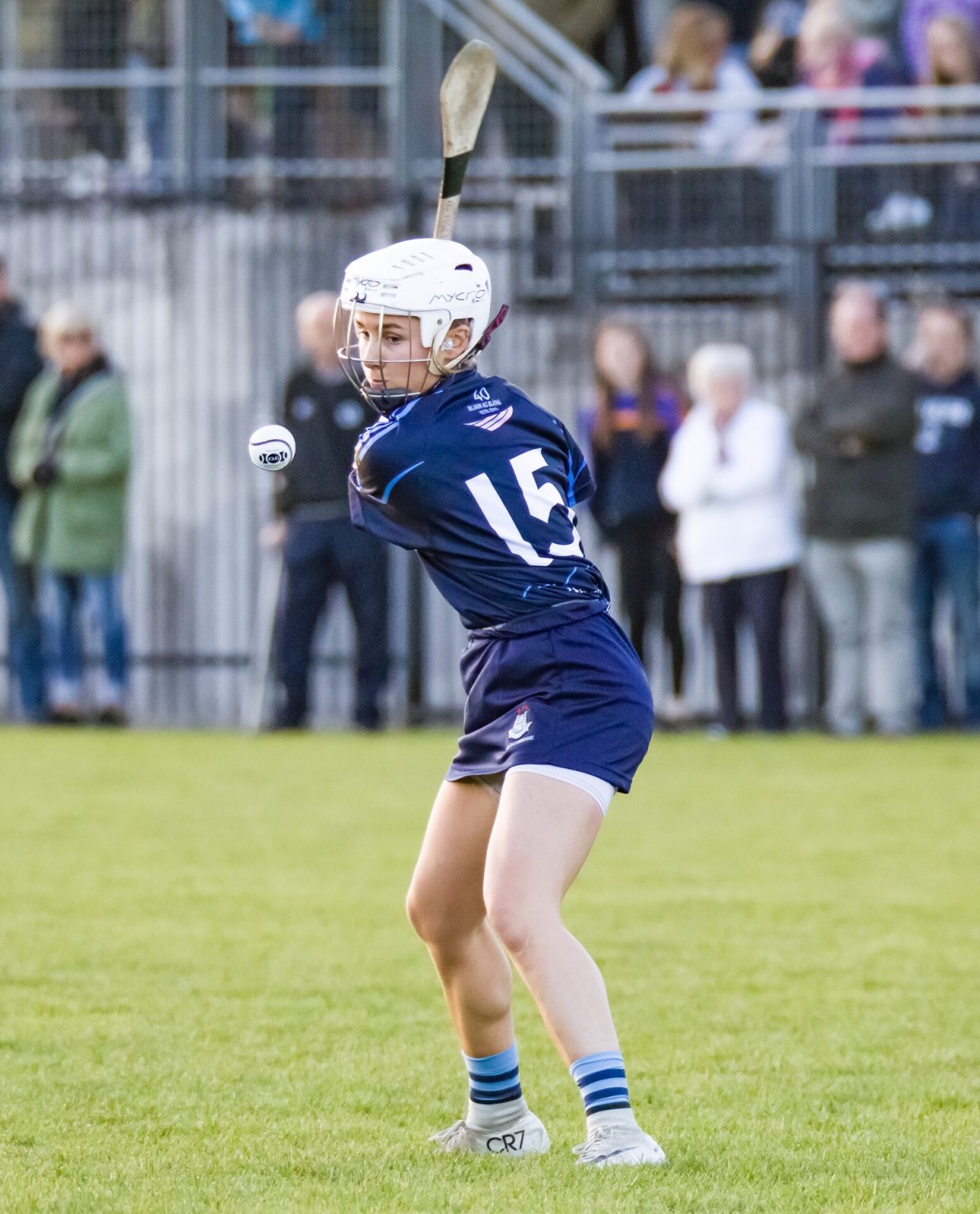