Another Round finished in this year’s We Are Dublin Camogie Championships, and we have all the results from the Intermediate and Junior competitions as things start to shape up. So let’s dive straight in. 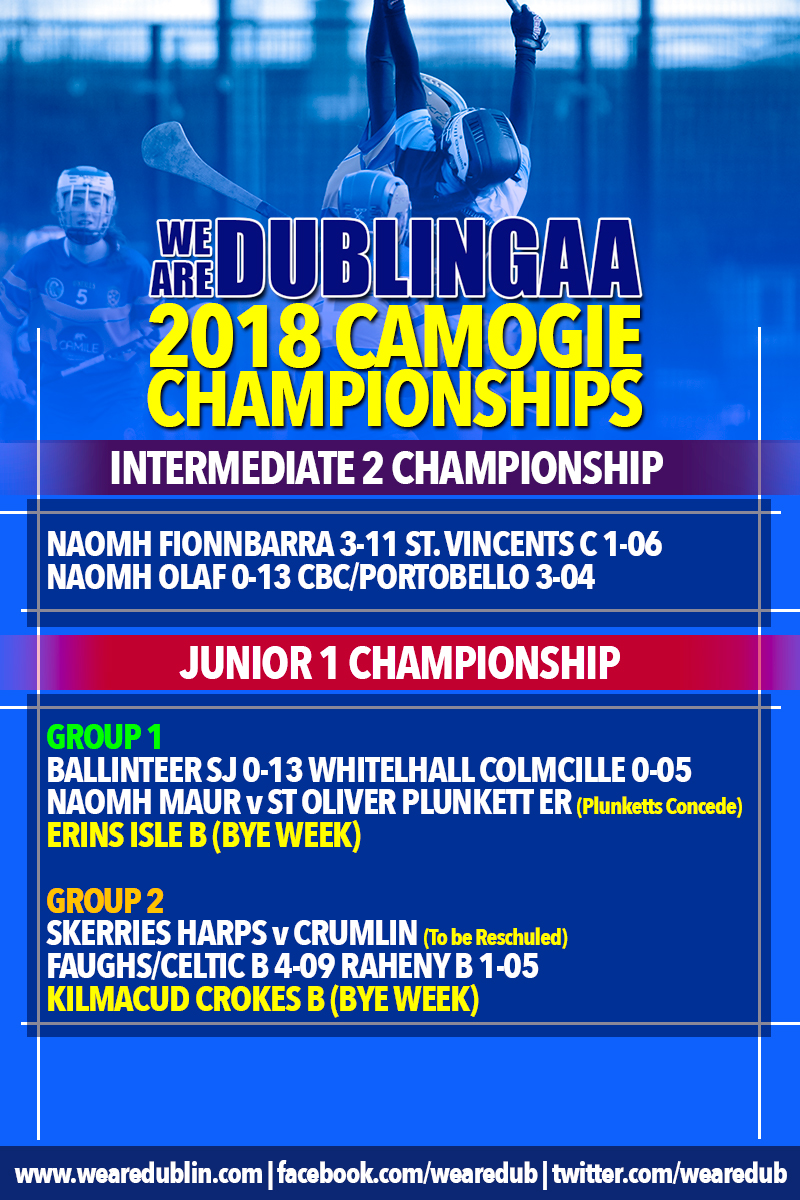 Naomh Fionnbarra made it two wins from two yesterday with a victory over St. Vincents C. Their opponents next week are Naomh Olaf who drew with CBC/Portobello yesterday 0-13 to 3-04. Barrs are top of the group on four points with Olafs on three, so next weeks game will be the Group decider.

With Erins Isle on a bye and St. Oliver Plunkett Eoghan Ruadh B conceding to Naomh Maur, it left all the action to Ballinteer St. John’s and Whitehall Colmcille. And it was Ballinteer who came out 0-13 to 0-05 winners and are now top after two rounds. There’s still three more rounds to go in this group before we’ll know who qualifies.

The game between Skerries and Crumlin didn’t go ahead yesterday so will be rescheduled for another date. But Faughs/Celtic B and Raheny B did take place with Faughs winning by 0-13 on a core of 4-09 to 1-05. That result puts Faughs on top with two wins from two and should see them through to the knockouts. 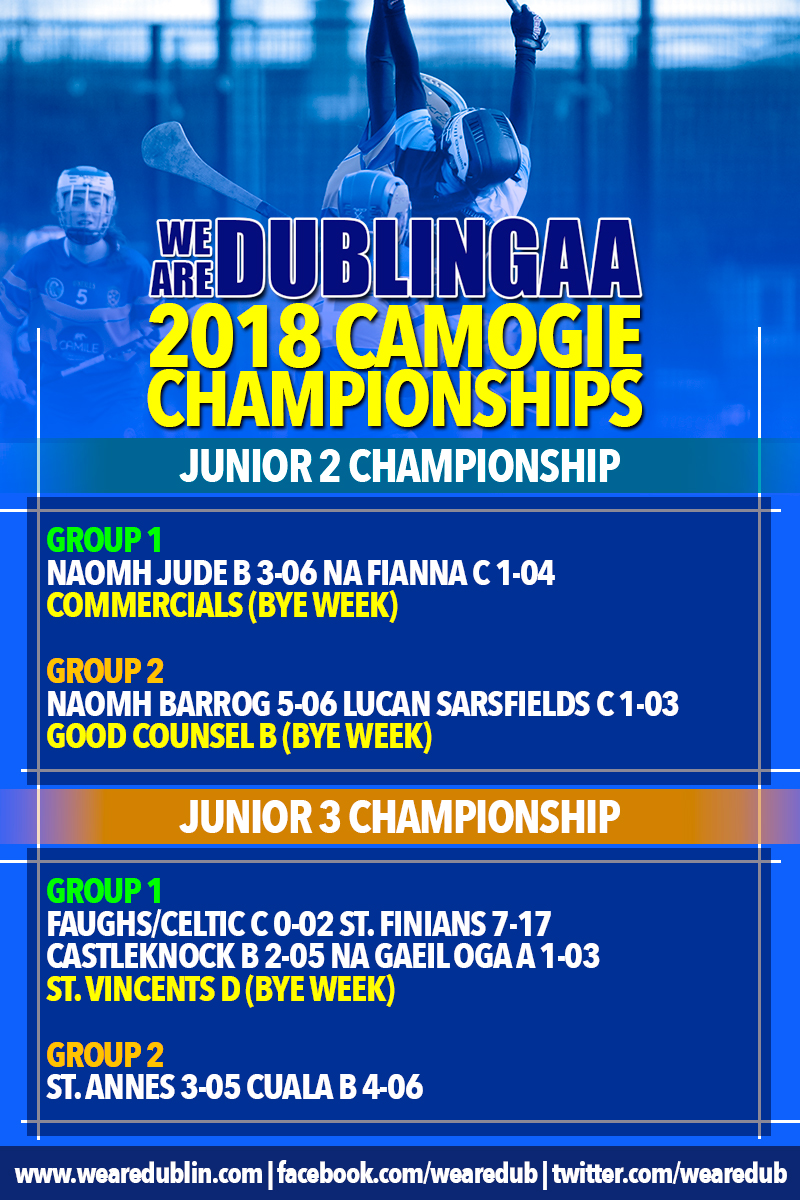 With Commercials on their bye week it was down to Naomh Jude B and Na Fianna C to deliver the action in this group. And it was Judes who got the win with an 0-08 point victory over Na Fianna. They now go into their bye in the final round on top but Na Fianna can still snatch some points playing Commercials next weekend.

Naomh Barrog got their second win of the competition yesterday with a 5-06 to 1-03 win over Lucan Sarsfields C and can take the week off next week on top. With a loss a piece for Lucan and Good Counsel B they’ll play out the round next weekend for second position.

St. Finians bounced back from their opening game defeat to St. Vincents D, with a very comfortable win over Faughs/Celtic C. The Finian’s girls registered 7-17 to Faughs 0-02 and that puts them second in the group table. Castleknock B lead the chasing pack with their second win of the competition. The saw off the challenge of Na Gaeil Oga yesterday on a 2-05 to 1-03 scoreline. But with three more rounds in this group it’s everything to play for.

One game yesterday in Group 2 with Cuala B beating St. Anne’s 4-06 to 3-04. That’s three out of three for the Cuala girls. They have a bye next week and will play Naomh Brid B the week after in Round 4. Brigids will face St. Anne’s next weekend. 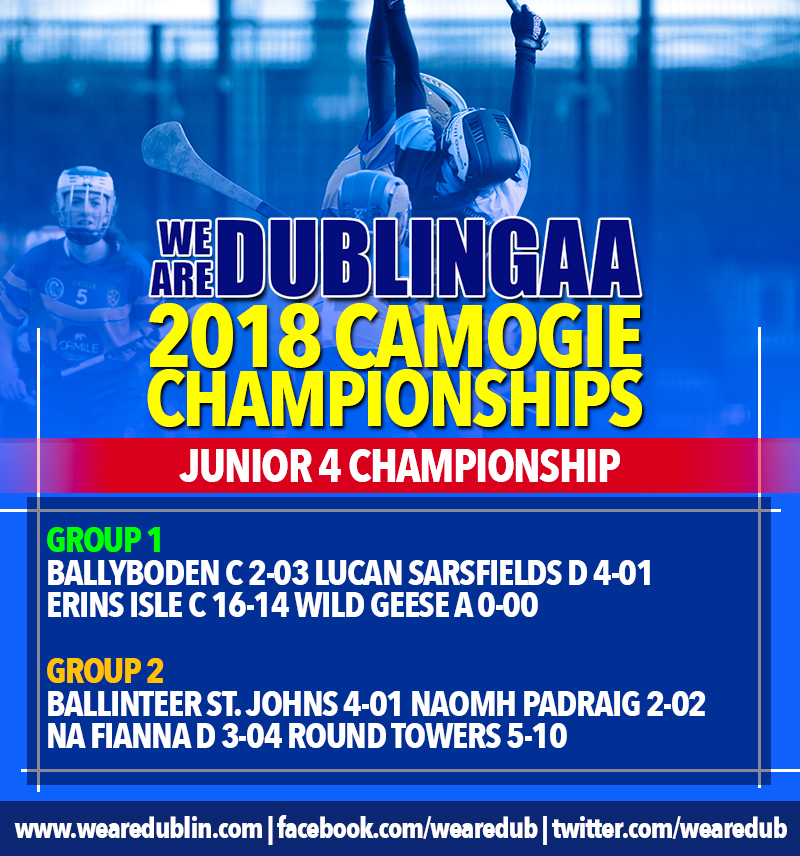 Lucan Sarsfields D and Erins Isle C got their Group 1 campaign off the a flyer yesterday. Lucan were 4-01 to 2-03 winners over Ballyboden St. Endas C. And Isle’s got chalked up a massive scoreline, beating Wild Geese 16-14 to 0-00. if the group comes down to points difference you can imagine the advantage Erins Isle now have. But it’s only Round 1 and there’s more games to come.

Ballinteer St. John’s were 4-01 to 2-02 winners over Naomh Padraig in their first game of the competition. And Round Towers were victorious over Na Fianna D on a 5-10 to 3-04 scoreline. These two sides avoid each other until the final round so will be looking to pick up more vital points next weekend.

ALL DUBLIN CLUBS URGED TO SUPPORT PREMIER CAMOGIE TEAM ON ALL...