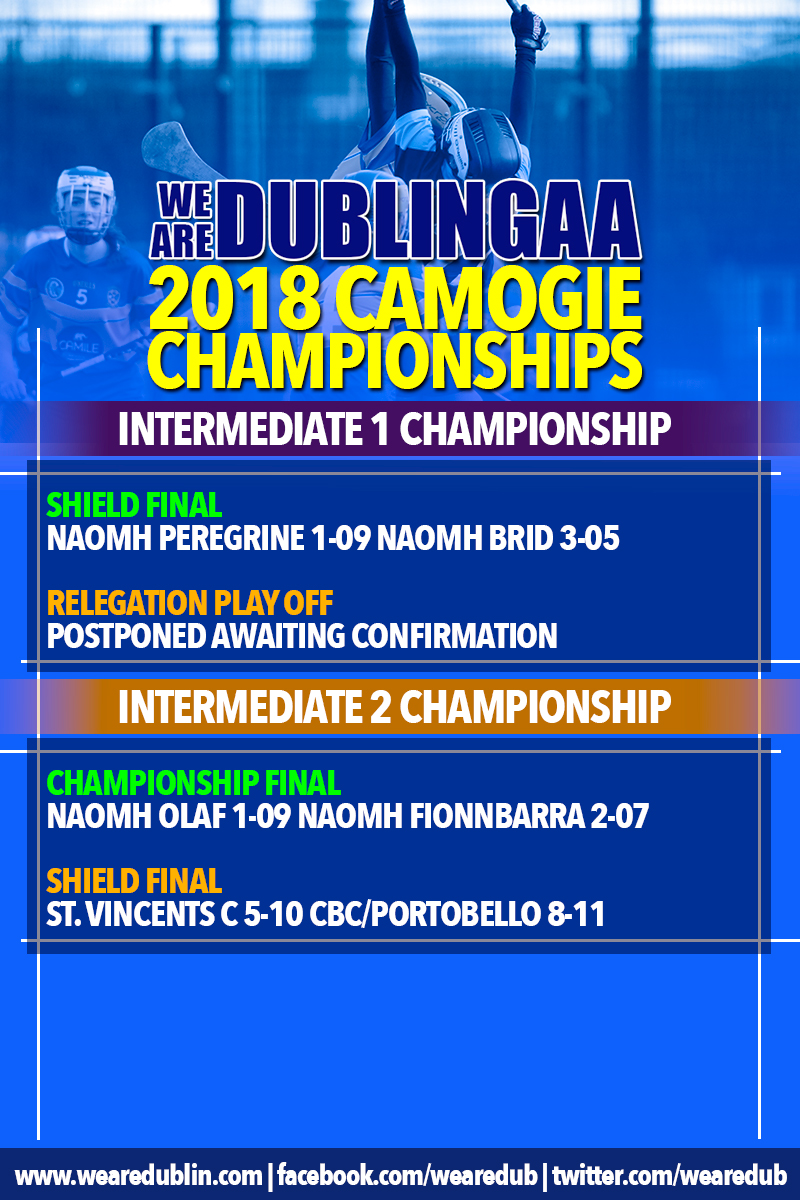 Another superb weekend of action across all grades in the We Are Dublin GAA Senior, Intermediate and Junior Camogie Championships. Sunday was packed with action with more Champions being crowned and more championships being completed.

So let’s not waste anymore time and get into the details.

With Peregrines and Brigids finishing third and fourth in Group 1 of this year’s Inter 1 Championship, their campaign wasn’t over as they entered the Semi Finals of the Shield competition to face opponents from Group 2. Naomh Brid faced Thomas Davis first and secured a final slot, beating them 1-09 to 0-08. Naomh Peregrine took on Clann Na Gael and ran out 1-10 to 1-03 winners.

on Sunday it was Naomh Brid who came out on top against Peregrines, beating them by two points to lift the Intermediate 1 Shield for 2018.

An end to end game between these two sides took place in Abbotstown on Sunday. And Naomh Fionnbarra, who have patiently waited so long to capture a Championship title, finally became Inter 2 Championship for 2018. Barrs forward Siobhan Kehoe finished top scorer with an impressive 2-06 to her name in a game that was in the balance right up to the full time whistle. Credit to Naomh Olaf who were worthy finalists and great opponents on the day, only one point seperated the sides at the final whistle.

Ten points seperated CBC/Portobello and Vincents at the final whistle of the Inter 2 Shield match. Porto the victors of the Shield to finish off their year. In the small group of four, CBC and Vincents finished third and fourth respectively and after losing to Championship finalists Finbarrs and Olafs, it was down to them to contest this final game. Congratulations to CBC/Portobello on their Shield win. 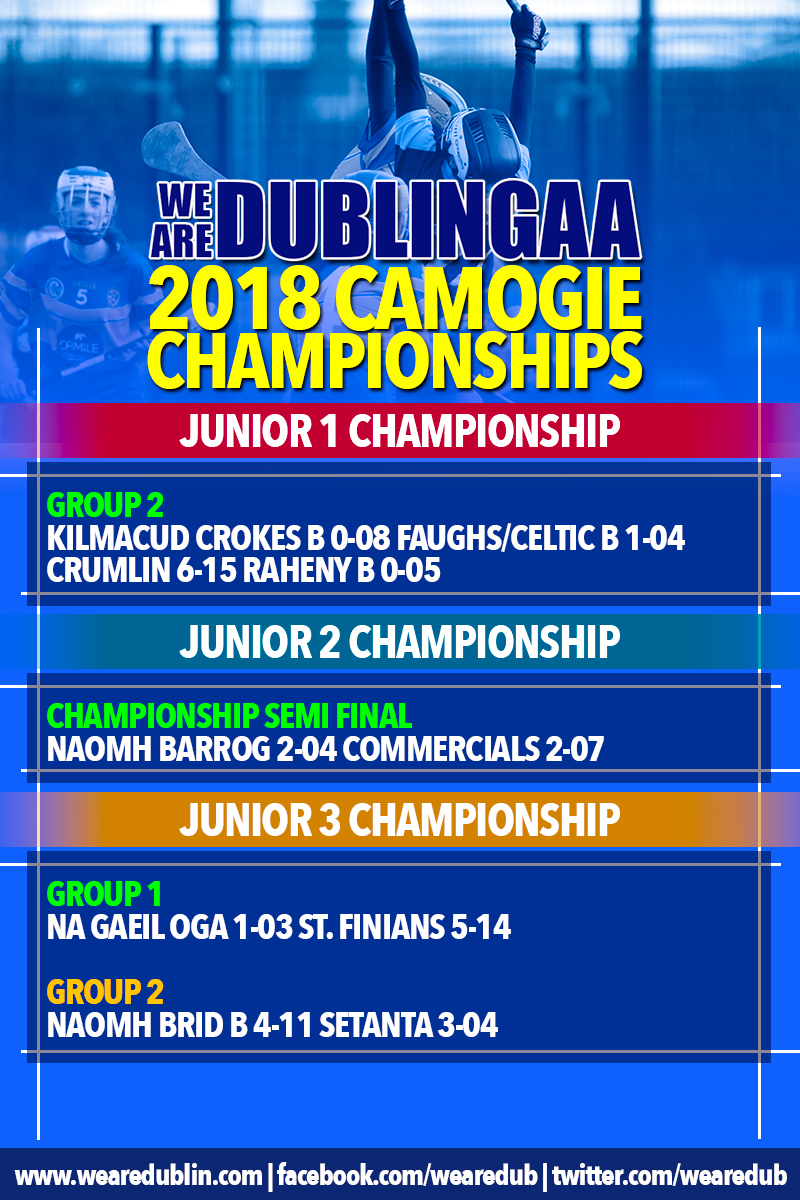 There were two games in Round 5 to complete the Junior 1 Group 2 Round Robin competition. And on script Kilmacud Crokes and Crumlin came out on top. Crokes had a one point win over Faughs/Celtic to finish the group with three wins from four. Crumlin, who had beaten Kilmacud in the earlier rounds finished their phase with a 6-15 to 0-05 victory over Raheny to end on top of the group.

With both groups decided in the Junior 1 Championship the semi final pairings will be Ballinteer St. Johns taking on Kilmacud Crokes and Crumlin facing Whitehall Colmcille. Both Semi Finals will take place this Sunday at 12:30pm

With Naomh Jude already through to the Junior 2 Final it was down to Naomh Barrog and Commercials to play off for the second final slot. And it was Commercials who rose to the challenge, beating Barrogs by 2-07 to 2-04.

Commercials and Naomh Jude will face each other this Sunday at 1:45pm in Abbotstown to contest the 2018 Junior 2 Championship Final.

A game in each group of this competition, almost finishing off the Round Robin stages. In Group 1 St. Finians were victorious over Na Gaeil Oga on Sunday by 5-14 to 1-03. And in Group 2 Naomh Brid B had a successful 4-11 to 3-04 win over Setanta.

Naomh Brid need to play St. Anne’s in a rescheduled game tonight, and the winner of that game will be the last of the four teams into this Sunday’s Championship Semi Finals. St. Finians will play the winners of tonights game with Cuala and St. Vincents D in the other Semi Final. All going to plan those two games will be played at 10:30am this Sunday morning.