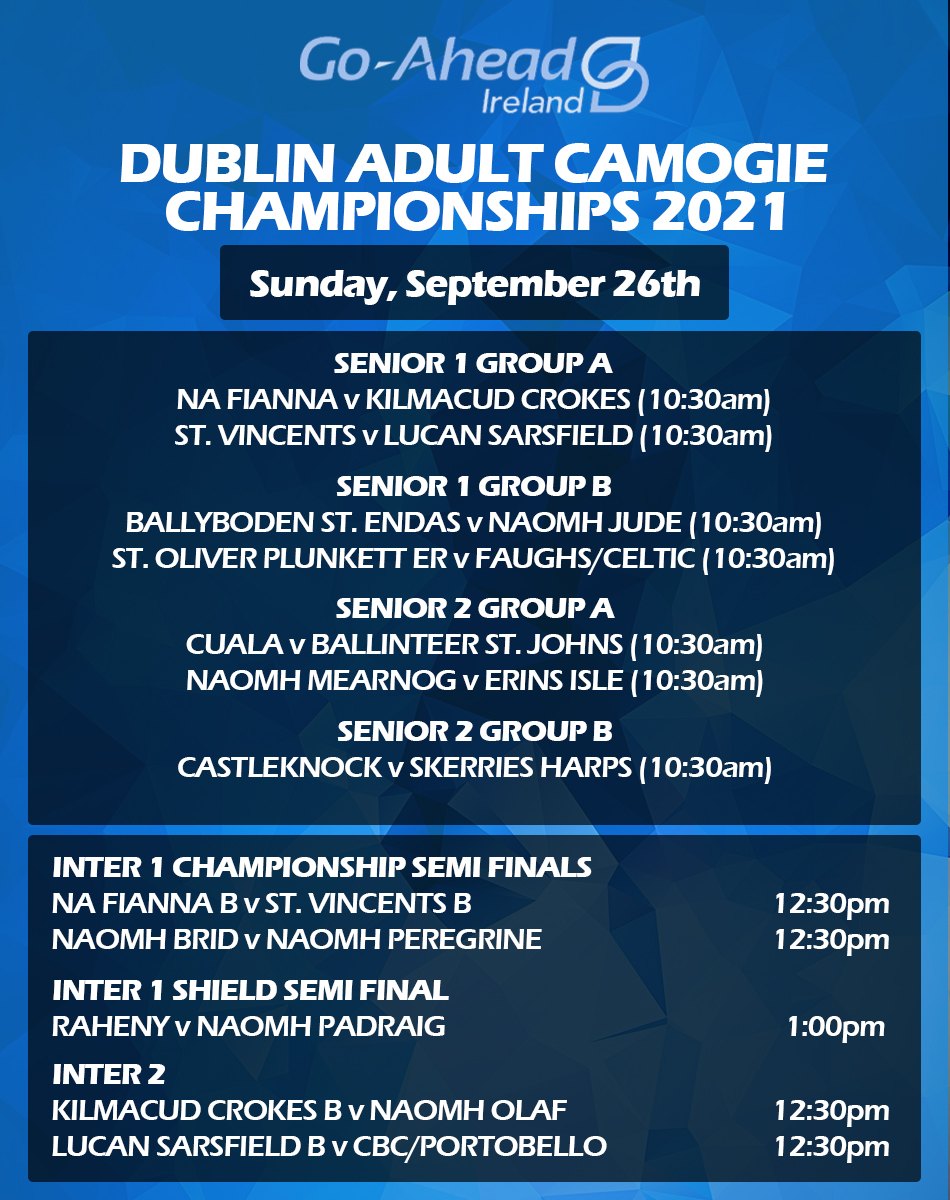 The team behind the fxtures in the Dublin Camogie county board have really had their work cut out for them in the build up to a massive Sunday in this year’s Dublin Adult Camogie Championship. Not only have we reached the final round of the Senior competition, but there are massive knock out deciders across the Inter and Junior Competitions. So let’s not waste any time, here’s the details.

St. Vincents lead the line in Group this year after back to back wins over Kilmacud Crokes and Na Fianna. They’ll come up against Lucan Sarsfield tomorrow , with Lucan still in search of a first win. Frustration has loomed large for the Southside side, drawing both their round games against Na Fianna and Crokes.

Kilmacud and Na Fianna will put it all on the line still hoping to make the cut off for a Semi Final slot.

In Group B Ballyboden will welcome an unbeaten Naomh Jude tomorrow morning. Boden lost to St. Oliver Plunkett Eoghan Ruadh in the last round after scoring a Round 1 victory over Faughs/Celtic. Judes will be hoping to make it three for three and remain on top of the group table.

Plunketts and Faughs go head to head, with Plunketts hoping for a win and will be keeping an eye on the other game in the hope of qualifying.

Naomh Mearnog and Ballinteer St. Johns are first and second respectively in Group A. Can Mearnogs make it three for three facing Erins Isle in the final round? Isles have only registeredan opening round draw with Cuala and will have a point to prove in the Senior 2 competition.

Ballinteer picked themselves up after losing to Mearnogs in the opening round, and secured a one point win over Isles in Round 2. They’ll head to Cuala tomorrow hoping to secure that second semi final slot.

In Group B, Good Counsel are currently in the top slot after a win over Skerries Harps and a draw against Castleknock. But they have to sit tomorrow out and watch on to see the outcome of the Castleknock and Skerries Round 3 fixture.

It’s Semi Final day in the Inter 1 Championship. And Na Fianna B, St. Vincents B, Naomh Brid and Naomh Peregrine make up the final four that wil decide the Championship title.

Na Fianna B topped Group A winning all three of their round games, and they face St. Vincents B who tied on points in Group B with Naomh Brid, but were a point short on score difference so finish as runners up. But that counts for nothing tomorrow as they both battle for a final berth.

There’s probably not a tighter pairing or the second Semi Final as Brigids and Naomh Peregrine go toe to toe. Peregrines only blemish was their opening round loss to Na Fianna. And Brigids squeezed the top spot from Vincents by a solitary score.

Raheny and Naomh Padraig will go head to head for a place in the competition’s Shield Final. And the winners will face Ballyboden St. Endas B who were 4-12 to 3-02 winners over Naomh Fionnbarra in the other Semi Final earlier this week.

Whitehall Colmcille wait in the wings and will be watching on at tomorrow night’s final round games in the Inter 2 Championship. The Northside panel completed their four games unbeaten and have a rest tomorrow. Kilmacud Crokes B and Naomh Olaf both still await a first win in the Championship as they square off tomorrow.

Lucan Sarsfield B and CBC/Portobello have both one win and one loss in this year’s championship. They face off tomorrow with an eye on the second slot in the Inter 2 table.

*There are back fixtures for four of the five teams in the Inter 2 Championship, all scheduled to go ahead on October 3rd. 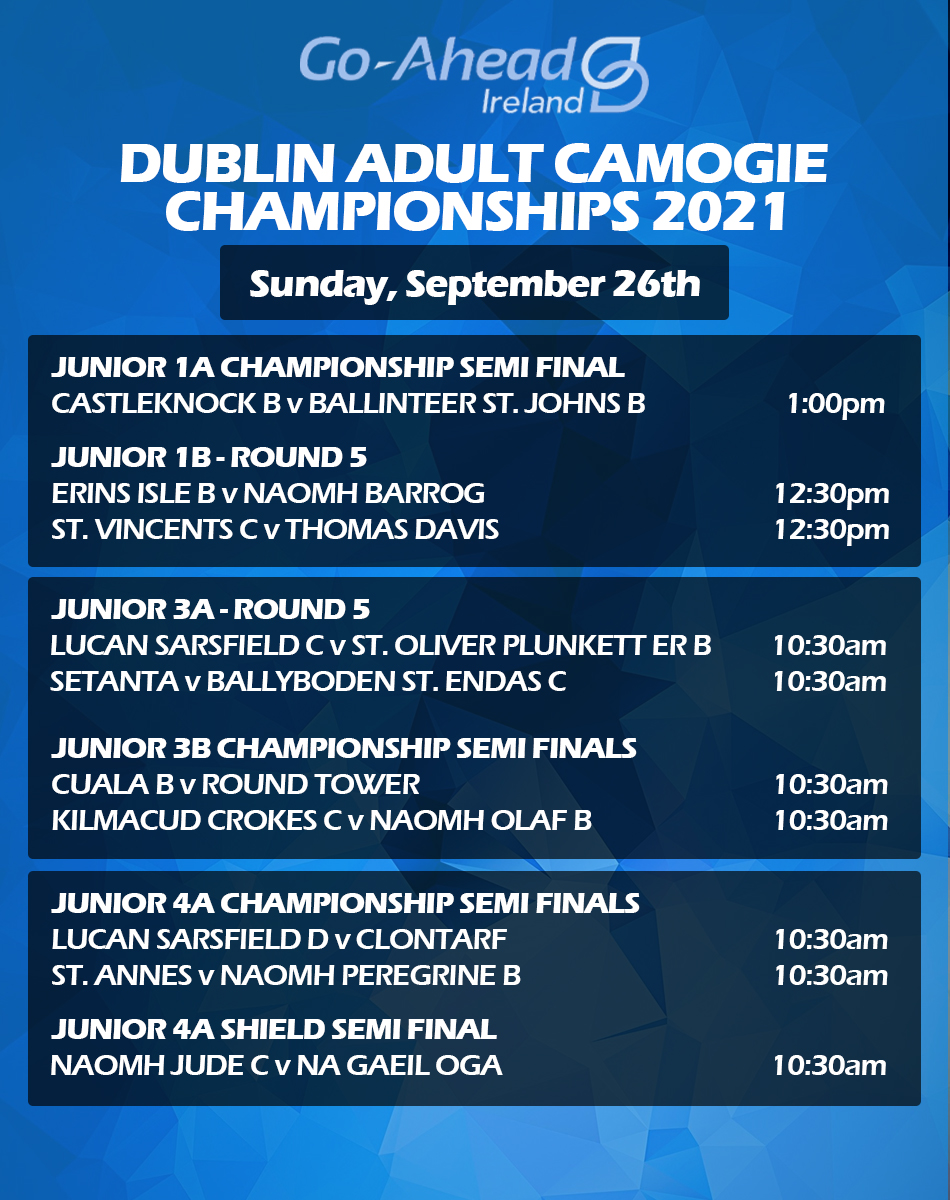 With Crumlin conceding to Naomh Maur in the first of the Junior 1A Semi Finals, that leaves Castleknock B and Ballinteer St. Johns B in a decider for the other slot. Castleknock won both of their Group B fixtures over Faughs/Celtic B and Crumlin, with Ballinteer finishing runners up in Group A.

With some back games to play, there’s still time to change the landscape in Junior 1B. Thomas Davis currently sit at the top of the table after three wins. They face St. Vincents C tomorrow who have only played one game so far, which was a win over Naomh Mearnog B.

Erins Isle B and Naomh Barrog square off in the second of tomorrow’s Junior 1B fixtures. Barrogs are yet to register a win, with Isles beating Naomh Mearnog B in Round 2.

Lucan Sarsfield C are three for three so far, and will be hoping fourth win over St. Oliver Plunkett Eoghan Ruadh B tomorrow who have one win in two played. Like Plunketts, Ballyboden St. Endas C have one from two, and face a Setanta side waiting on their first win.

It’s Semi Final day in Junior 3B. Group A winners Cuala B face Group B runners up Round Tower. Kilmacud Crokes C topped Group B and they’ll face the Group A runners up Naomh Olaf B.

St. Annes and Lucan Sarsfield D topped Groups A & B in the Junior 4A competition. And they face respective runners up Naomh Peregrine B and Clontarf.

Ballinteer St. Johns C conceded to Faughs/Celtic C in the first of the Junior 4A Shield Semi Finals, and that leaves Naomh Jude C and Na Gaeil Oga squaring off tomorrow for a chance to play Faughs in the Shield Final. 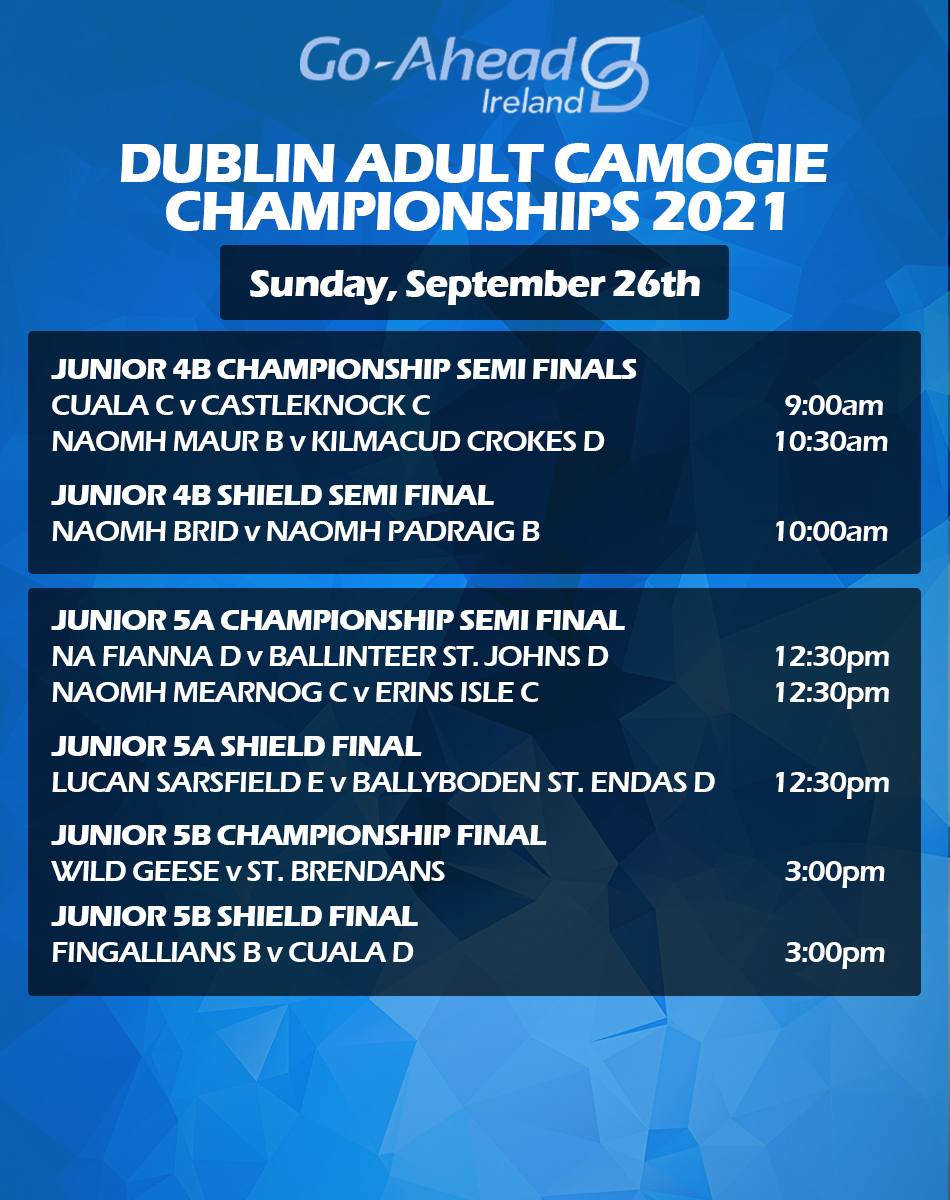 Naomh Maur B and Cuala C both finished the round phase unbeaten in their respective groups in Junior 4B. And now they’ll face Kilmacud Crokes D and Castleknock C tomorrow to decide who will compete for this year’s Junior 4B title.

Good Counsel C drew a bye into the 4B Shield Final and they await the winners of tomorrow’s Semi Final between Naomh Brid and Naomh Padraig B.

Group A winners Naomh Mearnog C will face Group B runners up Erins Isle C in the first of tomorrow Junior 5A Semi Finals. Na Fianna D had the honour of winning Group B and they take on Ballinteer St. Johns D who finished behind Mearnogs in Group A.

The Junior 5B Championship comes to a close tomorrow with both the Championship Final and Shield Final throwing in at 3:00pm.

Wild Geese and St. Brendans have earned the right to contest the Championship Final. Geese won all three of their Round games, so St. Brendans will be hoping to make amends for their Round 2 defeat to the table toppers.

Cuala D and Fingallians B will close off their season contesting the Shield Final.