We have all tonight’s results in the Junior 2, 3 and 4 competitions in the Dublin Adult Camogie Championship 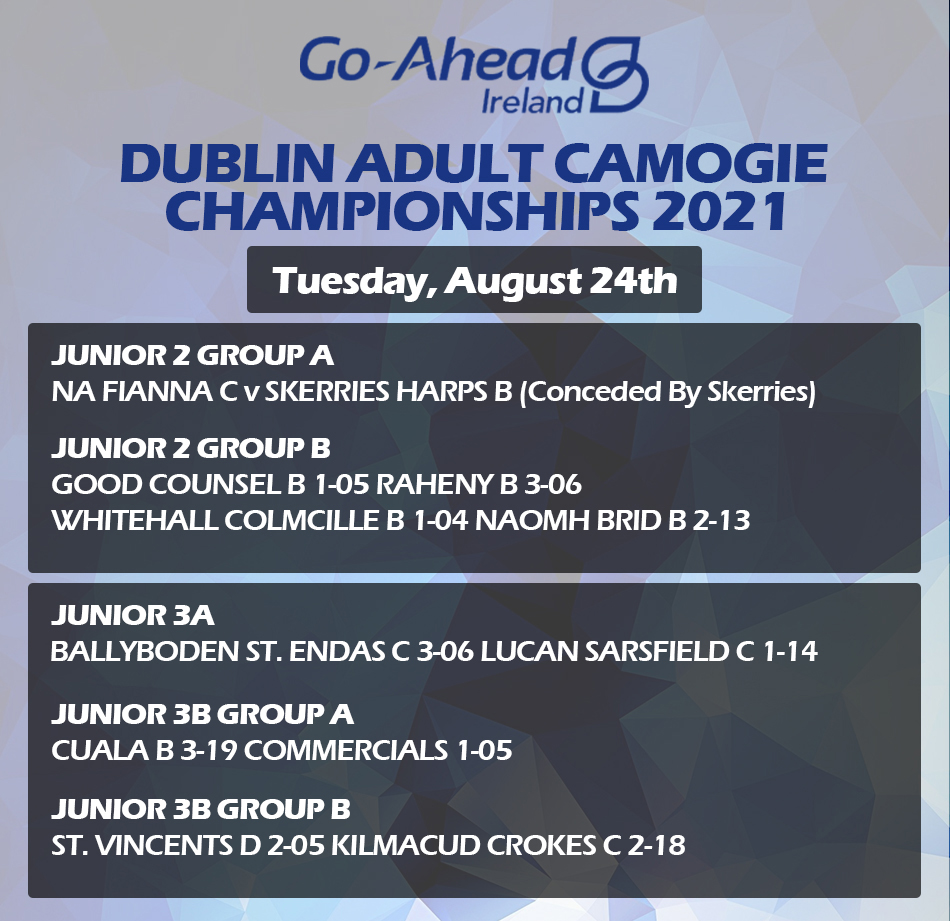 So tonight we saw the commencement of three of the grades in this year’s Go Ahead Ireland Dublin Adult Camogie Championship. We had 14 games across Junior 2, 3 and 4. These 3 Junior competition will run their round robin phase over the nexr few week, finishing on September 7th. Any back/postponed games wil be played after this time before the knock out stages begin.

So here are the details on tonight’s Junior games in the Adult Camogie Championship.

With Skerries Harps B conceding to Na Fianna C tonight, there was no action in Group A of the Junior 2 competition. The game between Clann Na Gael and Fingallians was re-scheduled due to player involvement in this weekend’s All Ireland Minor Semi Final between Dublin and Cork.

Raheny B and Naomh Brid B got their campaigns off to a winning start in Group B. Raheny were 3-06 to 1-05 winners on the road against Good Counsel B. And Brigids travelled to Whitehall Colmcille, where they were 2-13 to 1-04 victors.

Naomh Brid will be at home to Good Counsel next week, with Whitehall travelling to Raheny.

Lucan Sarsfield’s C panel got off to a flying start beating Ballyboden St. Endas C by 1-14 to 3-06. They’ll face St. Finians next Tuesday with Boden heading for St. Oliver Plunkett Eoghan Ruadh B who come off their bye week.

Setanta are on their bye week next week, and their game tonight was postponed, again for player involvement in the weekend’s Minor action.

Cuala B and Commercials went toe to toe tonight and it was Cuala who ran out 3-19 to 1-05 winners. The Cuala girls will sit out next weeks’ Round 2 action on a bye with Commercials welcoming Naomh Olaf B.

A 2-18 to 2-05 scoreline saw Kilmacud Crokes C defeat St. Vincents D in their opening Group B fixture. Crokes will be looking to make it 2 for 2 when they take on Round Towers, who were on their bye tonight. St. Vincents will sit out Round 2 returning to face Towers in Round 3. 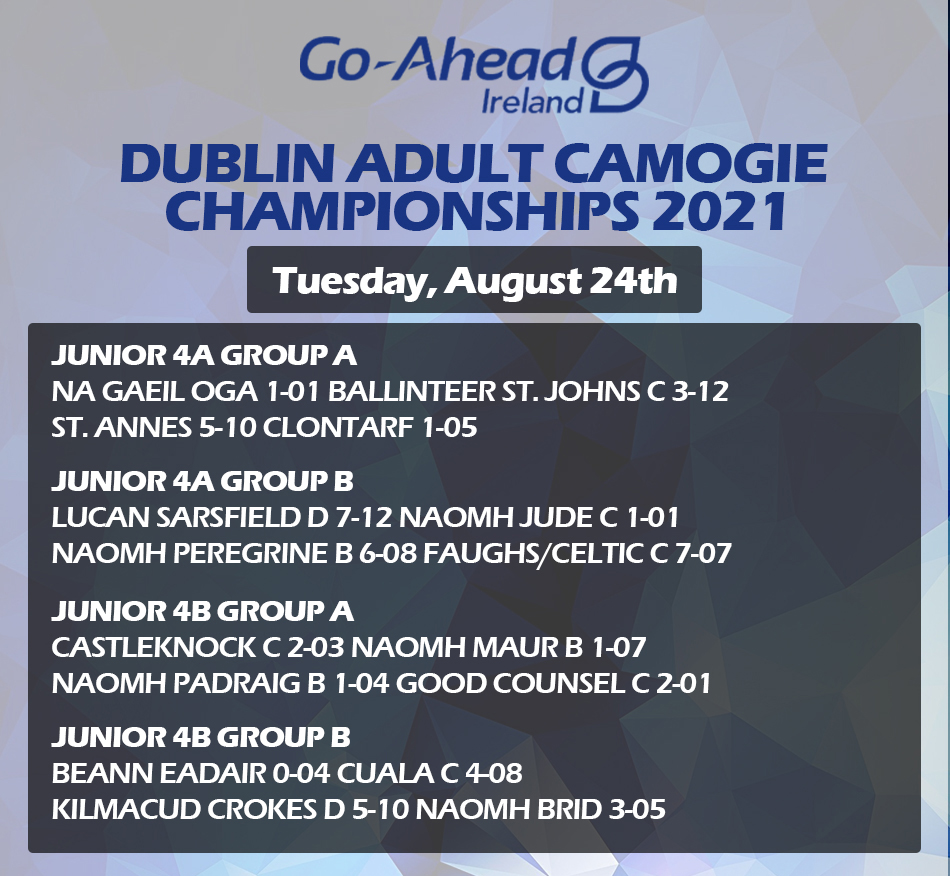 Ballinteer St. Johns C and St. Annes had opening night victories in Group A of the Junior 4A Championship. Ballinteer were 3-12 to 1-01 winners over Na Gaeil Oga, while Annes beat Clontarf by 5-10 to 1-05.

The two winning sides will square off in Round 2 with Clontarf and Na Gaeil Oga facing each other.

Lucan’s D Panel put in a massive shift tonight beating Naomh Jude C by 7-2 to 1-01. They’ll face Faughs/Celtic C next week, who also were successful in their opening game. The Faughs ladies travelled to Naomh Peregrine B and finished winners in a 13 goal scorefest on a 7-07 to 6-08 scoreline.

Naomh Maur were one point winners tonight, beating Castleknock C by 1-07 to 2-03. They’ll welcome Naomh Padraig B next week, after Pats drew with Good Counsel C on a 1-04 to 2-01 scoreline.

Castleknock will travel to Good Counsel for their Round 2 clash.

Cuala C and Kilmacud Crokes D were opening night winners. Cuala had a 4-08 to 0-04 victory on the road against Beann Eadair. Crokes welcomed Naomh Brid and finished 5-10 to 3-05 winners.

Next week Cuala and Crokes will square off, with Brigids and Beann Eadair going head to head.

And that’s all the action from tonight’s Junior Championships. Join us on Thursday when there’ll be more Adult Camogie Championship action. Both the Inter 1 and Inter 2 Championships get underway, alongside the opening night action in Junior 1 and Junior 5.