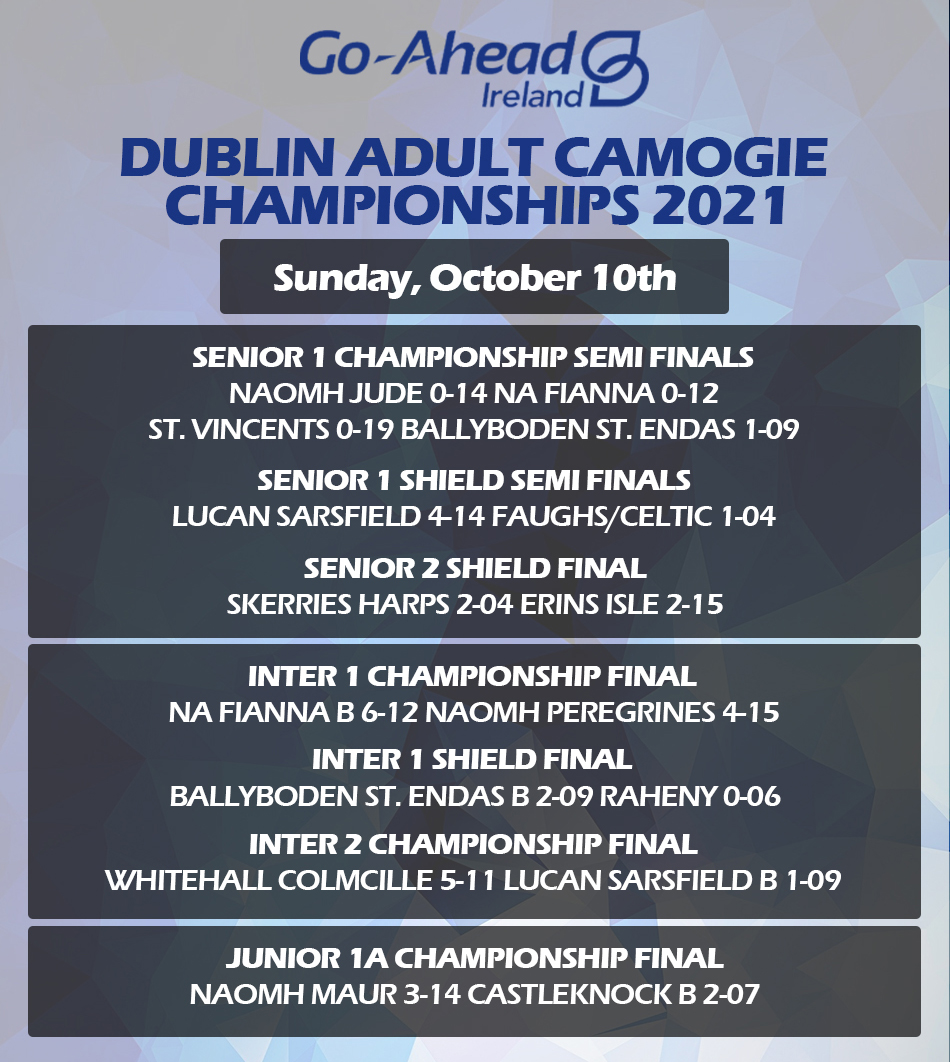 Today we saw Champions and Shield winners crowned across a lot of competitions in this year’s Go Ahead Dublin Adult Camogie Championship. And we also know the make up of this year’s Senior 1 Championship Final. Let’s take a look at all today’s results.

A repeat of last year’s Senior Championship Final is not set in stone. Naomh Jude scored a 2 point win against Na Fianna this morning on a 0-14 to 0-12 scoreline. And St. Vincents saw off the challenge of Ballyboden St. Endas with that game finishing on a 0-19 to 1-09 scoreline.

One of the 2 Shield Semi Finals took place earlier, and Lucan Sarsfield booked their place beating Faughs/Celtic by 4-14 to 1-04.

Erins Isle were crowned Senior 2 Shield Champions after their 2-15 to 2-04 victory over Skerries Harps. A positive end to Isles championship campaign.

A great day of action in Trinity Sports Ground throughout the day. Supporters were treated to 2 fantastic final at the Inter Grade.

Four sessions of Extra Time were needed to seperate Na Fianna B and Naomh Peregrine in deciding this year’s Inter 1 Champions. Eventually it was Na Fianna B celebrating on a 6-12 to 4-15 victory. But if there was ever an advertisement for Dublin Club Camogie, this was it. It was only unfortunate that there could only be one winner. Full credit to both Na Fianna and Peregrines for a fantastic, competitive game. And Congratulations to Na Fianna for lifting the Inter 1 Championship.

In the Inter 2 Championship Final, Whitehall Colmcille once again ground out a 5-11 to 1-12 victory over Lucan Sarsfield B to secure a Championship crown. And while the scoreline may look like Whitehall had an easy run, that wasn’t reflected in the games action. Again, credit to both Whitehall and Lucan for entertaining spectators in this championship finale.

A 3-14 to 2-07 win for Naomh Maur saw them secure the Junior 1A Championship title, seeing off the challenge of Castlknock B. Both sides went into today’s game unbeaten in the competition, so something had to give. And a ten point victory saw Maurs comfortably clinch the Junior 1A Crown. 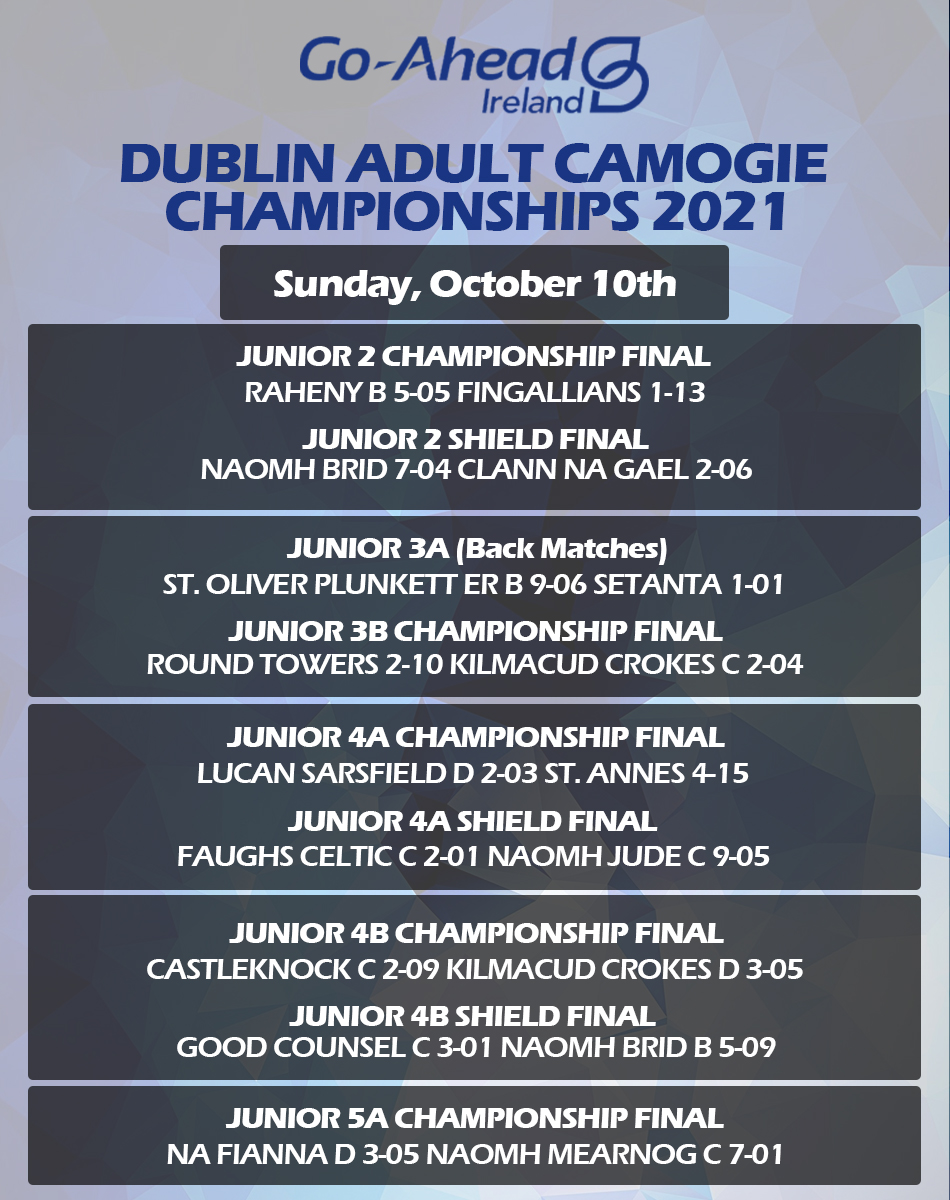 After a perfect round robin and a 1-12 to 1-03 win over Na Fianna C in their Semi Final, Raheny B were today crowned Junior 2A Champions. They 5-05 to 1-13 winners over a Fingallians side who also went into today’s final unbeaten. Congratulations to Raheny on their Championship win.

Naomh Brid came out winner in today’s Junior 2A Shield Final, beating Clann Na Gael by 7-04 to 2-06 to give a positive end to their 2021 season.

A huge 9-06 to 1-01 win fror St. Oliver Plunkett Eoghan Ruadh B over Setanta today sees them finish in the second position and qualify for the Junior 3A Championship Final in their final game.

Round Towers caused an upset today eating Kilmacud Crokes C by 2-10 to 2-04 to clinch the Junior 3B Championship title. Towers were runners up in Group B with Crokes finishing top. Both won their respective Semi Finals, but it was Towers who proved hungrier today to secure the silveware.

St. Annes completed the perfect season in Junior 4A, beating Lucan Sarsfield D by 4-15 to 2-03 to dominate the competition and capture the Championship title.

In the shield competition, Naomh Jude C ran out 9-05 to 2-01 winners in today’s final to end their season on a high note.

One point seperated Castleknock C and Kilmacud Crokes D today in the Junior 4B Championship Final. And the silverware went to Castleknock who finished their season as champions on a 2-09 to 3-05 scoreline.

A fourteen point win saw Naomh Brid B comprehensively beat Good Counsel C by 5-09 to 3-01 and lift the Junior 4B Shield.

Naomh Mearnog C were too strong for Na Fianna D today in this year’s Junior 5A  Championship decider. The Portmarnock side finished with a seven goal haul in their 7-01 to 3-05 final score.

There’s plenty more action to come in the 2021 Go Ahead Adult Camogie Championship despite so many Champions and Shield winners crowned today. Stay tuned here and on the official Dublin Camogie website for all the details.