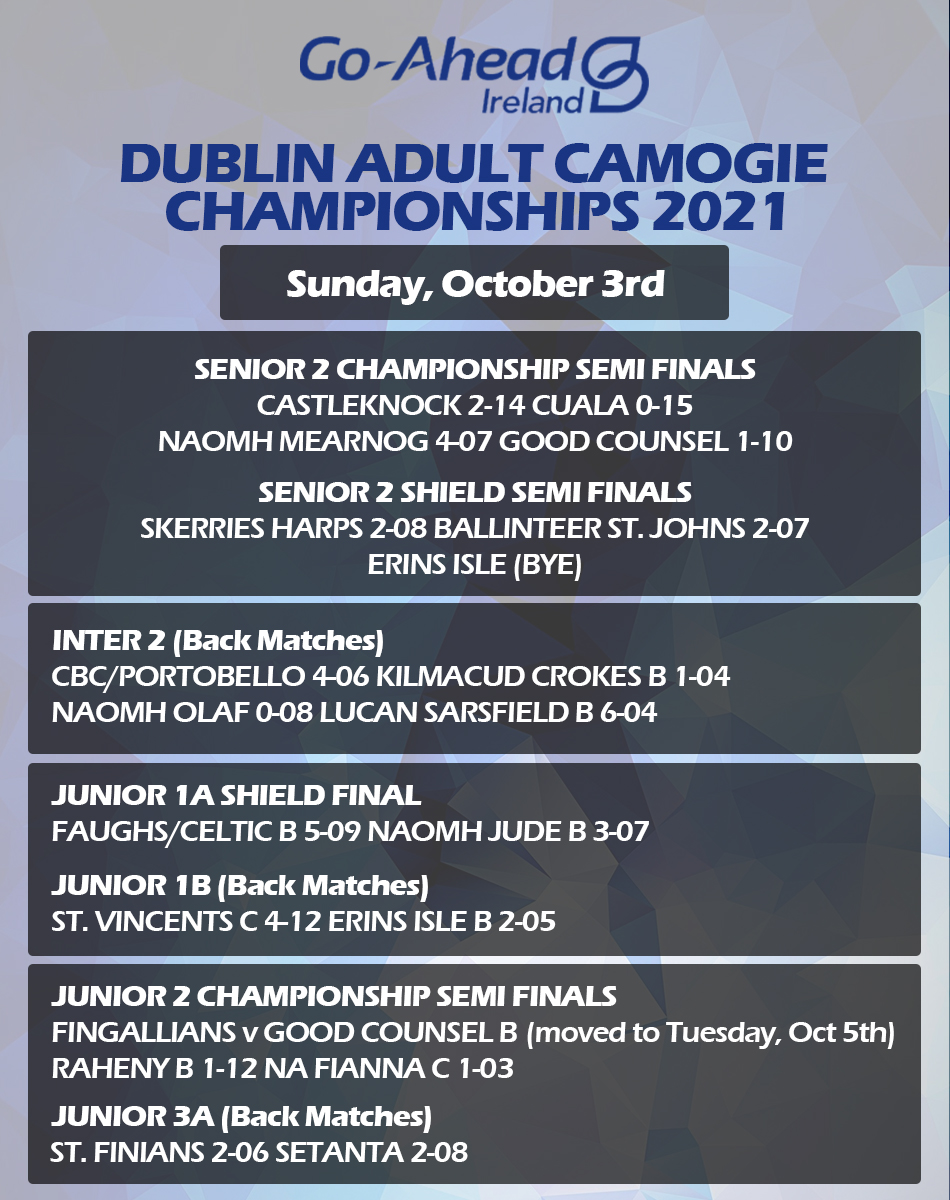 After today’s games, we really are getting closer to the conclusion of this year’s Dublin Adult Camogie Championship. Next weekend the Senior 1 Championship reaches the Semi Final stage. But today there were some big games in the Senior 2, Inter and Junior competitions. Here’s all the details.

Castleknock and Naomh Mearnog came out on top this morning in the two Championship Semi Finals and will battle each other now for the honour of becoming Senior 2 Champions.

Castleknock entertained Cuala and came out as 2-14 to 0-15 victors earlier, while Naomh Mearnong put in a massive shift to beat Good Counsel by 4-07 to 1-10. So going by the script so far it’s the two table toppers in groups A & B that will contest the championship.

In today’s Shield Semi Final a one point victory for Skerries Harps will see them take on Erins Isle in the Shield Final. Today’s game finished on a 2-08 to 2-07 scoreline in favour of Skerries over Ballinteer St. Johns.

Two back matches today in the Inter 2 competition. CBC/Portobello picked up their second win in four games with a 4-06 to 1-04 victory over Kilmacud Crokes B to move them up the table. But with Lucan Sarsfield B beating Naomh Olaf by 6-04 to 0-08 this afternoon it’s sees CBC/Porto just fall short.

Today’s results see Whitehall Colmcille and Lucan Sarsfield B finish in first and second place in the Inter 2 table.

Faughs/Celtic B finished their Junior 1A championship with a win today over Naomh Jude B. That 5-09 to 3-07 win sees Faughs awared the Junior 1A Shield trophy.

Today’s 4-12 to 2-05 victory for St. Vincents C over Erins Isle B sees Vincents go level on points with Thomas Davis in the Junior 1B Table. And Vincents still have one more rescheduled game to play against Naomh Barrog before this championship reaches a conclusion. Will the Marino top the group? We’ll have to wait and see.

A 9 point win for Raheny B saw them knock Na Fianna C out of the Junior 2 Championship earlier at the Semi Final juncture. A 1-12 to 1-03 sends Raheny into the Championship decider. They’ll have to wait until Tuesday evening to find out if they’ll be playing Fingallians or Good Counsel B, so stay tuned.

Setanta picked up their first championship points today, beating St. Finians by 2-08 to 2-06. But this competition is far from over. Setanta still have a rescheduled game aganst St. Oliver Plunkett Eoghan Ruadh B, and St. Finians have still to play Ballyboden St. Endas C before the grade is squared off.

And that’s all today’s action. Don’t forget there’s plenty more Dublin Camogie Championship and Shield action across Senior Inter and Junior competitions next weekend, so keep a close eye here for all teh details.

DUBLIN AND CARLOW TO DO IT ALL OVER AGAIN.