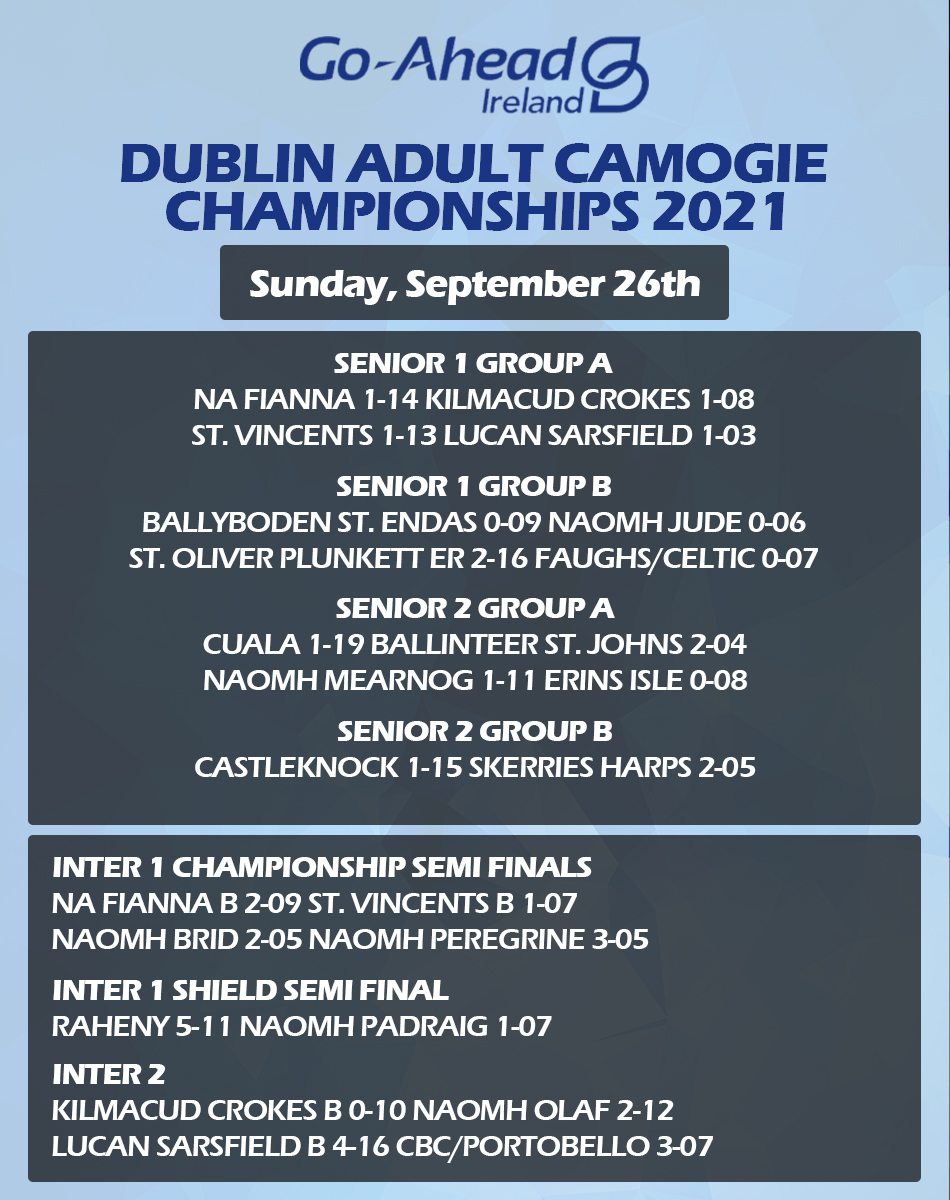 What a busy day. From Senior 1 to Junior 5, 30 games took place in this year’s Go Ahead Dublin Adult Camogie Championship. And soon the championship action will come to a close. We now know the make up of the knockout stages of the Senior competitions, but that’s only the tip of teh iceberg. Here’s the details in today’s action.

St. Vincents completed a perfect round robin this morning beating Lucan Sarsfield on a ten point margin by 1-13 to 1-03. That sees the Marino side top Group A and they will face either St. Oliver Plunkett Eoghan Ruadh or Ballyboden St. Endas in the Championship Semi Finals next weekend.

Plunketts finished their Group B campaign with a 2-16 to 0-07 victory over Faughs/Celtic today. There was a three way tie at he top of Group B, with Naomh Jude topping the group on score difference. Ballyboden St. Endas beat Judes this morning and with Plunketts beating Faughs they were deadlocked so we’re just waiting on confirmation of score difference or head to head to determine that Semi Finalist.

Naomh Jude will face Na Fianna in the other Semi Final. Na Fianna came away this morning with a 1-14 to 1-08 win over Kilmacud Crokes to secure the runner up spot in Group A behind St. Vincents.

Naomh Mearnog completed their Group A campaign with a third consecutive win this morning, beating Erins Isle by 1-11 to 0-08. And that means a Semi Final fixture against Group B runners up Good Counsel.

Cuala secured the runner up slot in Group A by claiming a 1-19 to 2-04 victory over Ballinteer St. Johns. And they’ll face Group B winners Castleknock who were 1-15 to 2-05 victors over Skerries Harps in their final round game.

Na Fianna B booked their spot in this year’s Inter 1 Final this afternoon. They took St. Vincents B panel and finished victorious on a 2-09 to 1-07 scoreline. Their opponents will be Naomh Peregrine who were victorious over Naomh Brid today by one goal on a 3-05 to 2-05 scoreline.

Naomh Olaf boosted their championship today beating Kilmacud Crokes B by 2-12 to 0-10. And with a back game still to be played against Lucan Sarsfield, theyre still in the hunt.

Lucan Sarsfield B took a step closer to a knockout slot in the Inter 2 competition with their 4-16 to 3-07 win over CBC/Portobello.

Both CBC and Naomh Olaf still have back fixtures to play so we’ll know next weekend the outcome of both. 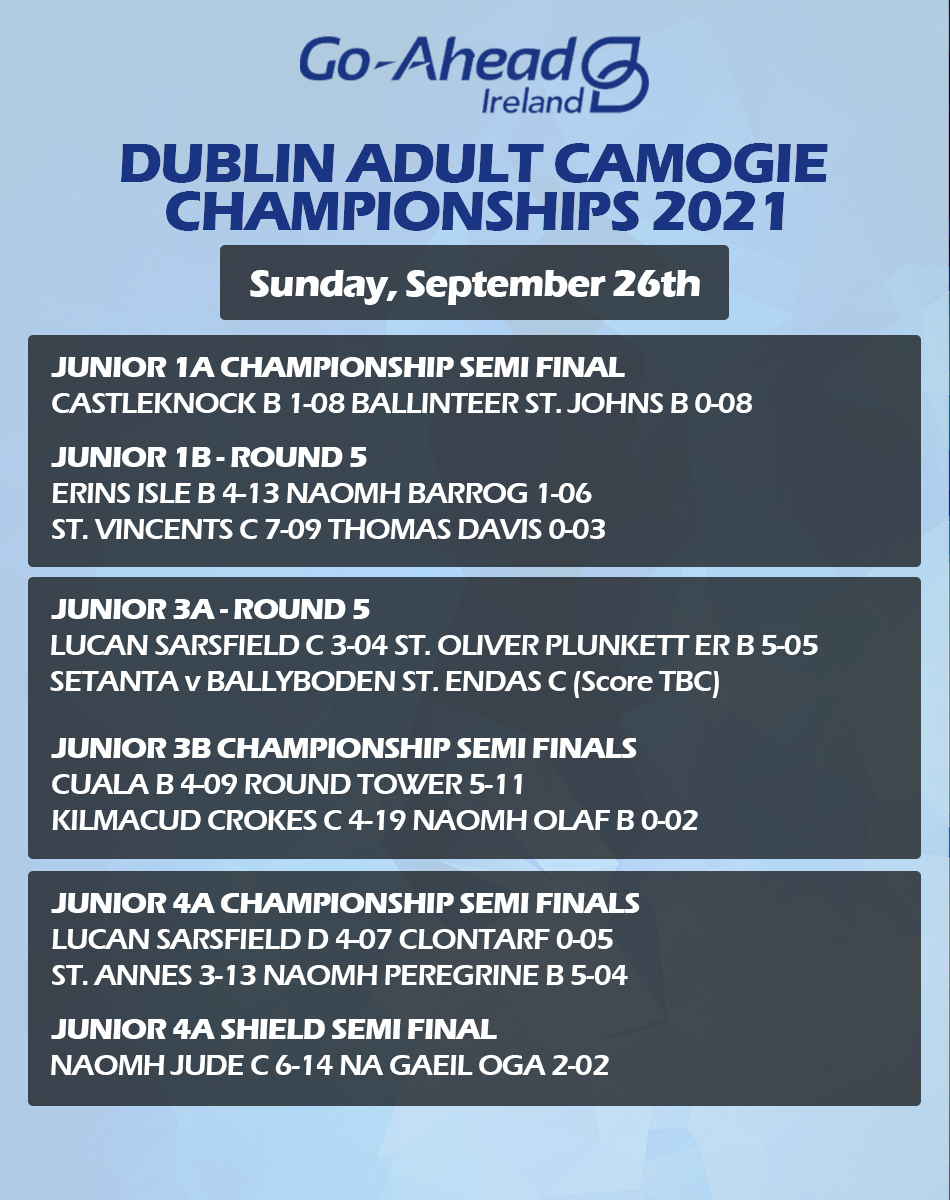 Castleknock B will face Naomh Maur in this year’s Junior 1A Championship final. A 1-08 to 0-08 win over Ballinteer St. Johns B today to sees Castleknock advance to the decider.

Wins for Erins Isle B and St. Vicnents C sees the championship stay alive for both sides. Isles were 4-13 to 1-06 winners over Naomh Barrog and Vincents saw off table toppers Thomas Davis on a 7-09 to 0-03 scoreline.

So there’s huge back game next weekend with Isles and Vincents facing each other. Vincents also have a second back fixture against Barrogs which could see them top the group.

St. Oliver PLunkett Eoghan Ruadh B had an important win over table toppers lucan Sarsfield C today. That 5-05 to 3-04 win puts them well in the hunt for a knock out slot.

Round Towers and Kilmacud Crokes C will contest this year’s Junior 3B Championship decider this year. Towers were 5-11 to 4-09 victors in their semi final against Cuala B today. And Crokes picked up a 4-19 to 0-02 win over Naomh Olaf B in their last four clash.

Lucan Sarsfield D secured a slot in this year’s Junior 4A final after their 4-07 to 0-05 Semi Final win over Clontarf. Their opponents will be St. Annes who saw off Naomh Peregrine B by 3-13 to 5-04.

In the Shield competition Naomh Jude C were 6-14 to 2-02 winners over Na Gaeil Oga in today’s Semi Final. That sets up a Sheild Final against Faughs/Celtic C who are through due a concession from Ballinteer St. Johns C. 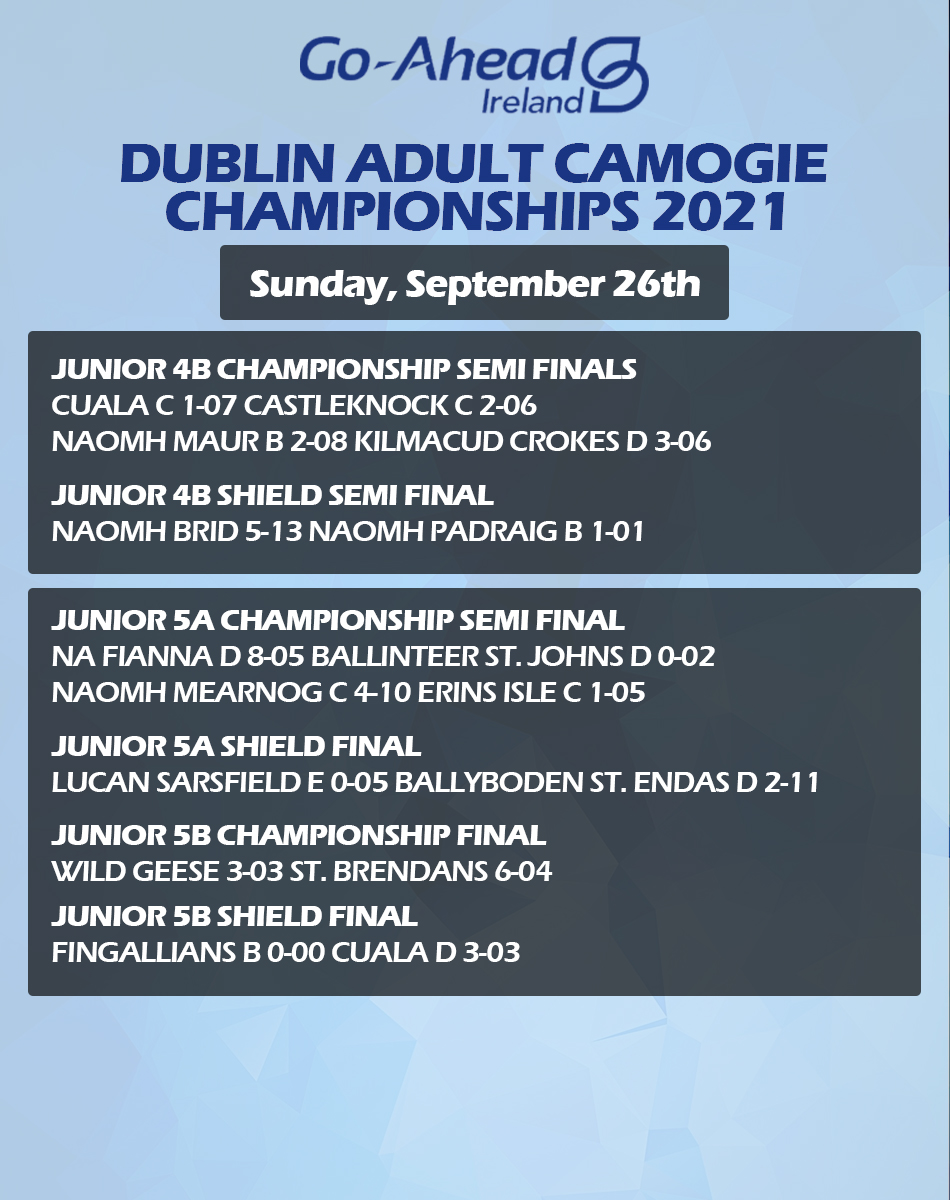 Castlknock C and Kilmacud Crokes D will fight it out for the honour of lifting the Junior 4B title this year. Castleknock beat Cuala C by 2-06 to 1-07, and Crokes were 3-06 to 2-08 winners over Naomh Maur B in today’s Semi Finals.

A 5-13 to 1-01 win for Naomh Brid over Naomh Padraig B sees Brigids into the Sheild Final in 4B againt Good Counsel C.

St. Brendans were crowned Junior 5B Champions this afternoon. They were 6-04 to 3-03 winners in the decider against Wild Geese.

Cuala D finished their 2021 Championship season with a 3-03 to 0-00 win over Fingallians B to capture the Junior 5B Shield and end on a high.

We Are Dublin GAA Senior And Junior Camogie Finals