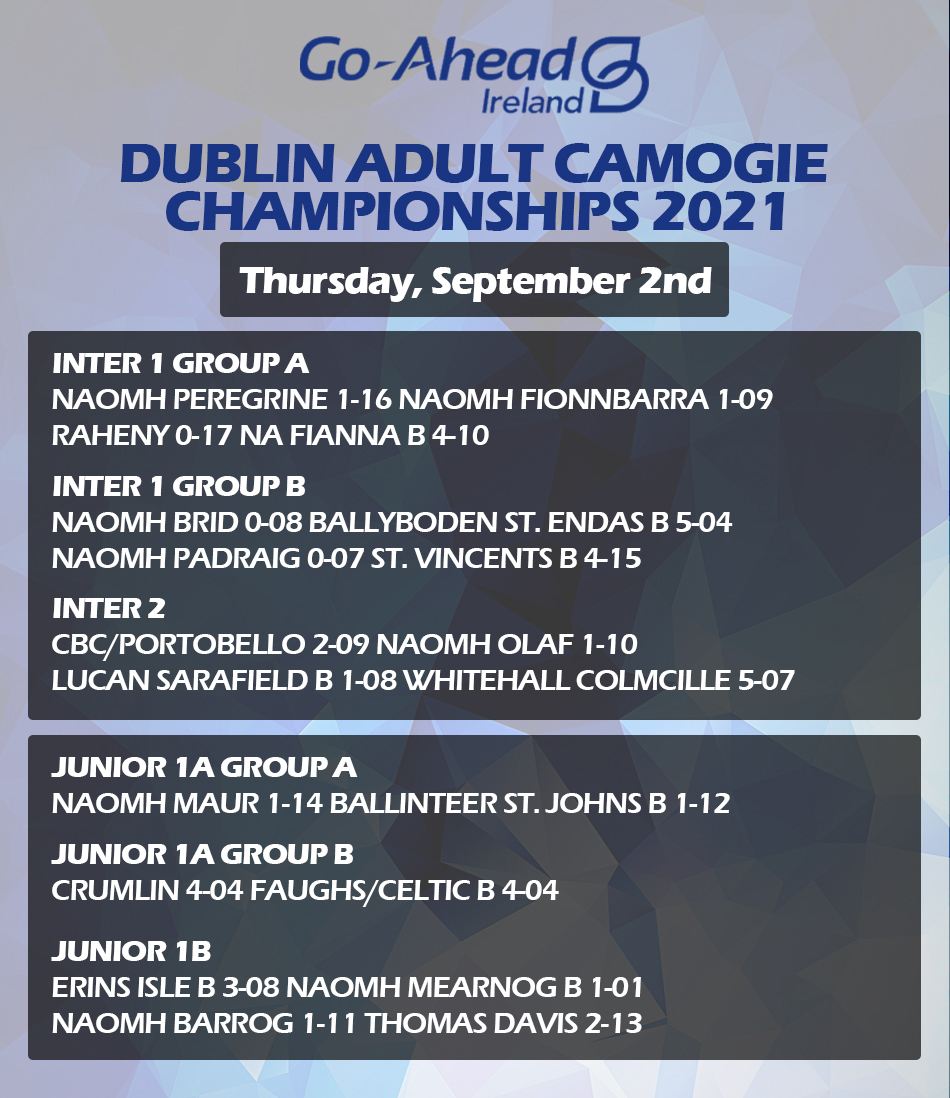 Another Thursday night and another batch of fixtures completed in the fast paced Inter and Junior competitions in this years Go Ahead Ireland Dublin Adult Camogie Championship. Tonight was Round 2 in the Inter 1 and 2 Championships, and also the Junior 1 and 5 competitions. Here’s all the details.

Na Fianna B secured their second Championship win tonight in Group A with a 4-10 to 0-17 over Raheny putting them top of the group. In the second of tonight’s Group A games, Naomh Peregrine were seven point winners over Naomh Fionbarra.

Next Thursday is the final round of three. Naomh Fionnbarra will go head to head with Na Fianna B, and Naomh Peregrine will square off against Raheny.

In Group B after drawing against Naomh Padraig last week Ballyboden St. Endas B secured a 5-04 to 0-08 win over Naomh Brid tonight which put them ahead of Brigids in the table. St. Vincents B were 4-15 to 0-07 winners over Naomh Padraig.

Pats and Brigids will face off in the final round, with Vincents welcoming Ballyboden.

CBC/Portobello got up and running tonight with a 2-09 to 1-10 victory over Naomh Olaf. And it’s two for two for Whitehall Colmcille as they were victorious over Lucan Sarsfield B on a 5-07 to 1-08 scoreline.

Kilmacud and Lucan will square off next week, as will Whitehall and CBC/Portobello.

Naomh Maur secured their second championship win and the top spot in Group A in the Junior 1A competition. Tonight they were 1-14 to 1-12 winners over a travelling Ballinteer St. Johns B panel.

In the final Round, Naomh Maur will be on their bye, with Ballinteer and Judes battling it out.

A tied game between Crumlin and Faughs/Celtic B tonight leaves Group B hanging in the balance. The sides played out a 4-04 a piece draw.

Faughs and Castleknock will go head to head in the final round. Castleknock and Crumlin also have a rescheduled Round 1 gamr to complete.

After losing to Thomas Davis in Round 1 Erins Isle B bounced back tonight beating Naomh Mearnog B by 3-08 to 1-01. Thomas Davis followed up their win over Isles, seeing off Naomh Barrog tonight on a 2-13 to 1-11 scoreline.

In this five round campaign, Isles and Vincents will play each other next week, with Mearnog and Barrogs squaring off. Thomas Davis wil be on their bye week.

It’s two for two in Group A for Naomh Mearnog C. Their opponents tonight were Ballinteer St. Johns D. And they followed up last week win with a 5-08 to 1-00 victory.

Ballinteer and Lucan complete their round robin phase facing each other next week, with Mearnogs comfortably finishing top heading into their bye week.

A second win for Na Fianna D tonight see the Mobhi Road girls secure the top spot in Group B as they saw off Ballyboden St. Endas D by 2-06 to 0-01.

With Na Fianna on their bye next week, Ballyboden and Erins Isle will face each other in the last round.

A second win on the bounce for Wild Geese tonight as they saw off St. Brendans by 3-07 to 0-02. And Cuala D recovered from last week’s defeat by beating Fingallians.

Cuala and Wild Geese will square off next Thursday, with Fingallians and Brendans going head to head.

And that’s all the results from tonight’s Inter and Junior action in the Adult Camogie Championship. Don’t forget this Sunday sees the start of this years Senior 1 and Senior 2 Championship and we’ll have all the action.