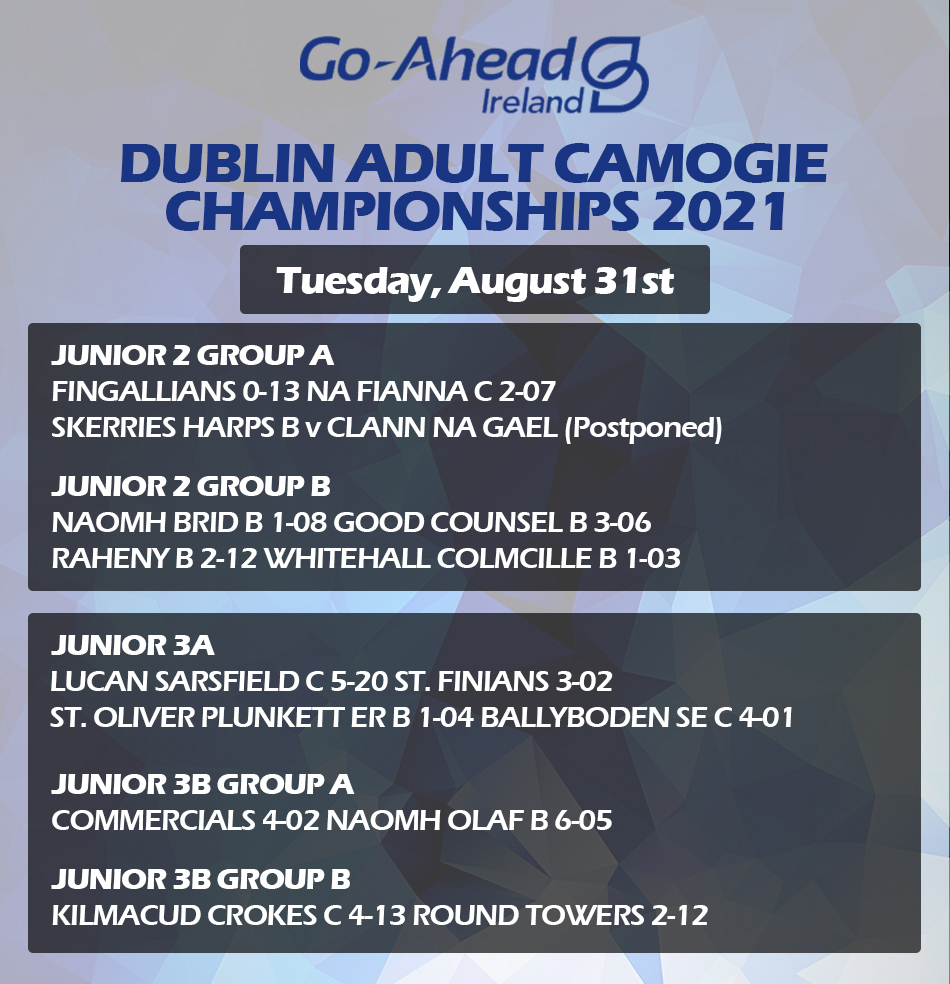 We bring August to a close, and see the end of Round 2 in Junior 2, Junior 3 and Junior 4 of this years Dublin Adult Camogie Championship. Plenty of action across the county as panels jostle for position. Here’s all the results from tonight’s Championship round games.

After an opening round win for Na Fianna C in the Junior 2 competition, they were stoppped in their tracks tonight as Fingallians held them to draw on a 0-13 to 2-07 scoreline. The other game in Group A between Skerries Harps B and Clann Na Gael was called off tonight with more details to follow.

Next week Skerries will welcome Fingallians, with Clann Na Gael facing Na Fianna in the final round.

In Group B Good Counsel bounced back from defeat last week, beating Naomh Brid B tonight by 3-06 to 1-08. Raheny B continued their winning ways with a 2-12 to 1-03 victory over Whitehall Colmcille B.

Round 3 will see Raheny and Brigids go head to head, with Whitehall entertaining Good Counsel.

Having lost by 2 points last week to Lucan C, Ballyboden St. Endas recovered to record 4-01 to 1-04 victory over St. Oliver Plunkett Eoghan Ruadh B tonight. Meanwhile Lucan recorded their second win with a huge 5-20 to 3-02 win over St. Finians tonight.

Boden go into their bye week in Round 3. Setanta will square off against Lucan Sarsfield C, with St. Finians facing Plunkett Eoghan Ruadh.

Commercials dropped points again tonight after an opening round defeat to Cuala B. Naomh Olaf B were the visitors and left with a 6-05 to 4-02 victory.

Olaf and Cuala will go head to head in the final round to see who’ll finish top of the group.

In Group B Kilmacud Crokes C are two for two, following up their opening round win St. Vincents D with a 4-13 to 2-12 victory over Round Towers tonight. That leaves them top of the table going into their bye, with Vincents and Towers meeting next week to play for the runners up spot. 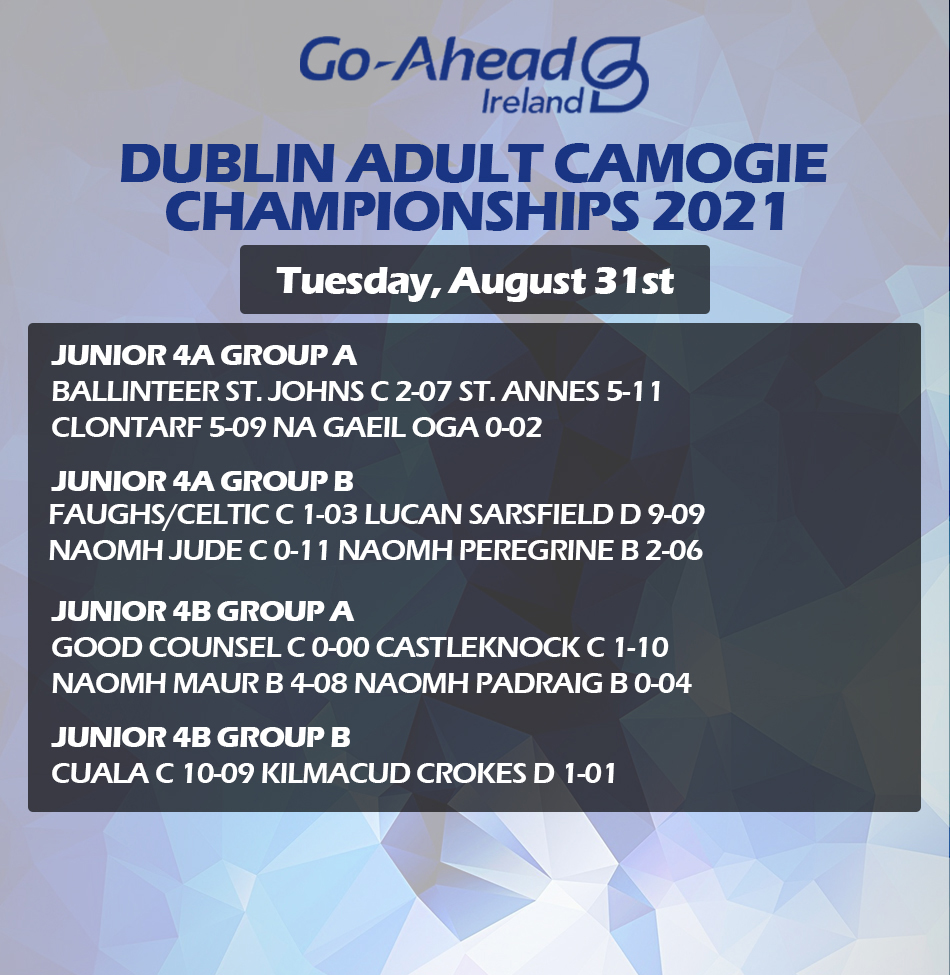 St. Annes stay top of Group A in the Junior 4A competition. Their 5-11 to 2-07 win over Ballinteer St. John’s tonight was a point more then they registered against Clontarf last week. And Clontarf recovered from that defeat, beating Na Gaeil Oga this evening by 5-09 to 0-02.

Annes will be looking for a clean sweep of wins in Round 3 when they face Na Gaeil Oga. Clontarf and Ballinteer will go head to head in the hope of qualifying for the knockouts.

In Group B Lucan Sarsfield D continued their goal scoring antics tonight registering 9-09 in their victory over Faughs/Celtic C. And Naomh Peregrine B secured a one point victory over Naomh Jude C on a 2-06 to 0-11 scoreline.

Next week, in the final round, Faughs and Judes will square off, and Lucan and Peregrines will go head to head.

Counsel finsidh their round robin competition next week with a trip to Maurs, while Pats will entertain Castlknock.

In Group B Cuala C went two for two with a 10-09 to 1-01 win over Kilmacud Crokes D. Beann Eadair conceded their game tonight with Naomh Brid.

That leaves Cuala on top going into their final game against Naomh Brid, with Crokes and Beann Eadair finishing their Group B campaign facing each other.

Don’t forget we’ll have much more action this week in the Dublin Adult Camogie Championship. There’s Inter and Junior action this Thursday. And of course this Sunday sees the beginning of the Senior 1 and Senior 2 Championships. Stay tuned right here for more details.