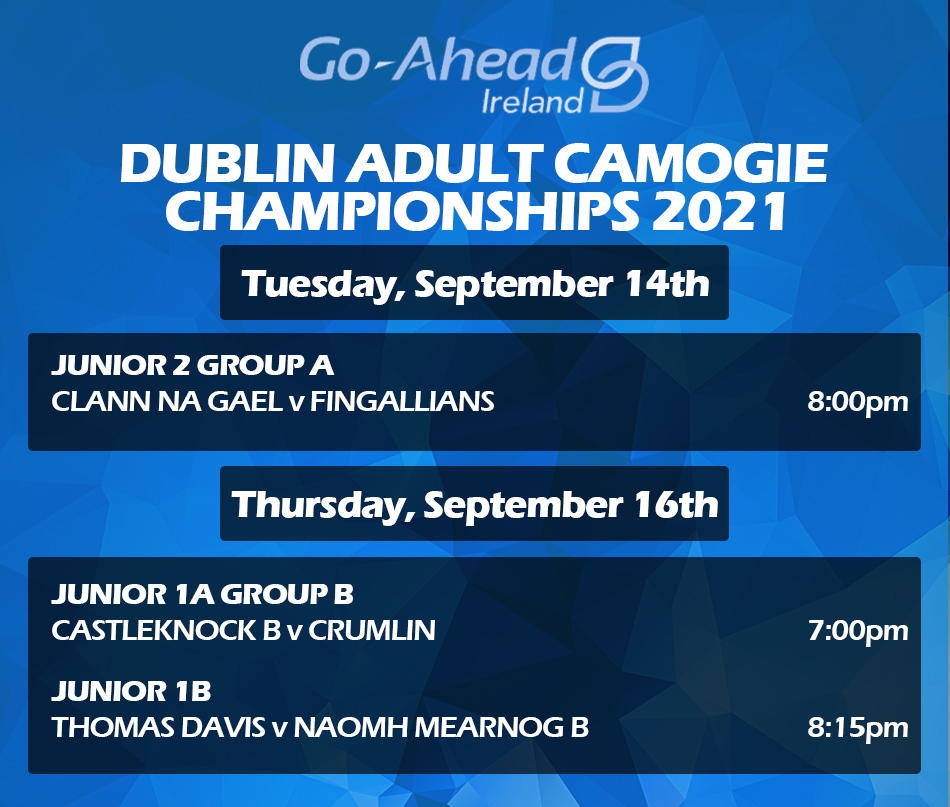 As we head towards another busy weekend of Senior Hurling and Senior Camogie action, there’s a matter of some Junior action in this year’s Go Ahead Ireland Dublin Adult Camogie Championships. We’ve got a couple of back games in Junior 2 and Junior 1A. Also the continuation of the Junior 1B championship. Here’s the details of some games happeining tonight and this coming Thursday.

With Na Fianna C the only team in Junior 2 Group A to have completed all of their Round games, there’s still a knock out spot available in this group. Fingallians and Clann Na Gael both have 2 games remaining. Tonight the face each other after vital points. Fingallians drew their Round 2 game against table toppers Na Fianna. Clann Na Gael lost to Na Fianna in Round 3 and are still to play Skerries Harps B next week. Fingallians will play Skerries in their final round game.

Junior 1A Group B

Castleknock B and Crumlin square off on Thursday which is a rescheduled Round 1 game. A Round 3 win for Castleknock over Faughs/Celtic B sees them at the top of the group table. Crumlin and Faughs played out a 4-04 score draw in Round 2. So whoever wins this game on Thursday will top the group.

Round 4 rolls around on the Junior 1B Championship. Thomas Davis come off their bye week to face Naomh Mearnog B. If Mearnogs can get a win over Thomas Davis they go level with them at the top of the table. The game between Naomh Barrog and St. Vincents C which was due to be played on Thursday has been rescheduled.

We’ll bring you the results of these 3 games this Thursday evening to clear the slate ahead of the Senior weekend on the Dublin Adult Camogie Championship.

Cork On The Double For Dublin Camogie U16 Squads