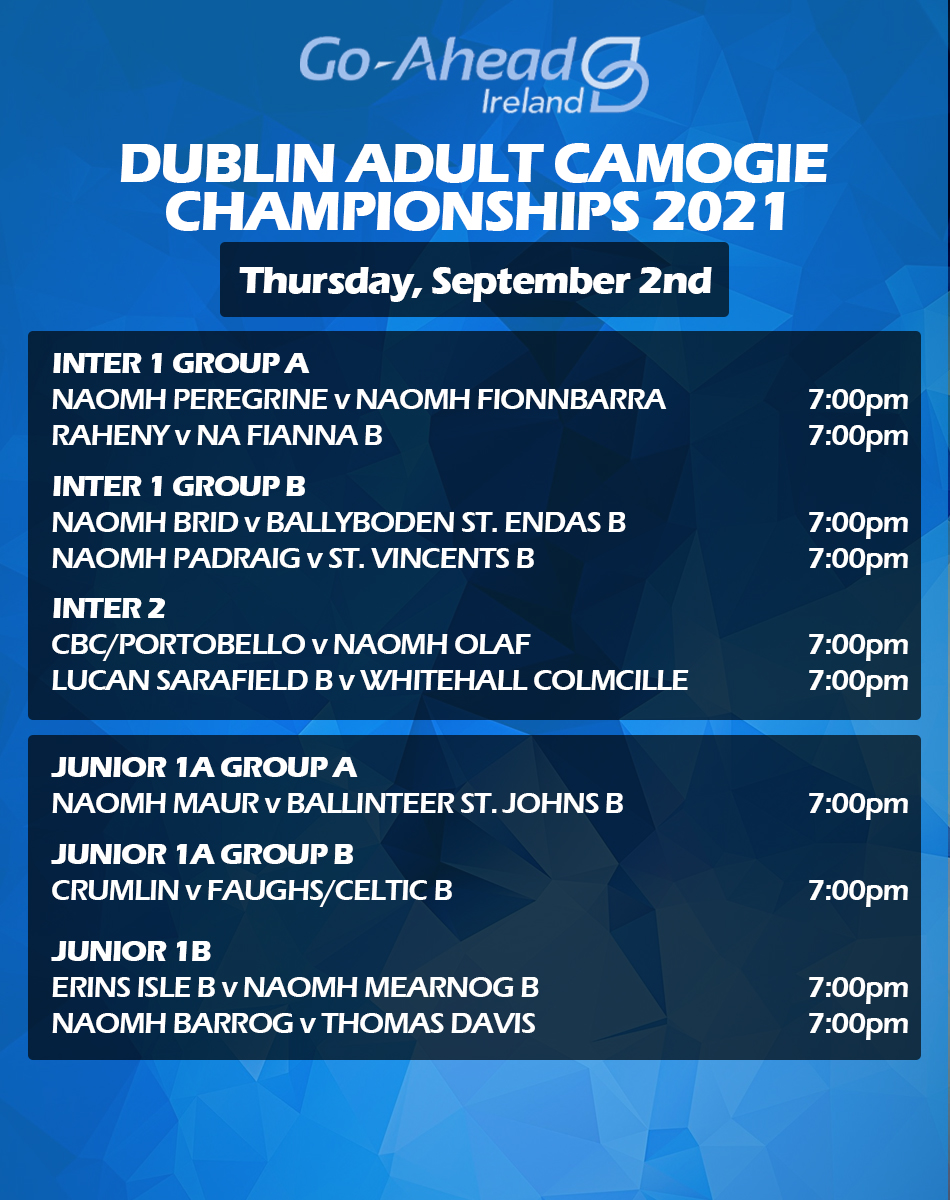 The action is coming thick and fast in this year’s Go Ahead Ireland Dublin Adult Camogie Championships. Last night saw Round 2 play out in the Junior 2, 3 and 4 campaigns. And tomorrow night we turn our attention to both Inter 1 and Inter 2, as well as both the Junior 1 and 5 competitions. There are 14 games in total across the camogie championships. And here’s all the details.

Raheny and Na Fianna B picked up Round 1 wins last week to share the top spot in Group A of the Inter 1 competition. And tomorrow night these two sides face each other in a crunch fixture.

Naomh Fionbarra and Naomh Peregrine are both in search of their first championship of 2021 and they’ll square off tomorrow in the second Group A game.

In Group B, Ballyboden St. Endas B and Naomh Padraig played out a 2-04 to 1-07 draw last Thursday. Tomorrow night Ballyboden will head for Naomh Brid who come off a 3-12 to 1-06 win over St. Vincents B. Vincents will be looking to recover from that loss when they face Naomh Padraig.

Whitehall Colmcille got off to the perfect start last Thursday beating Kilmacud Crokes B by 1-13 to 2-08. Tomorrow night they’re on the road to face Lucan Sarsfield B hoping to make it 2 for 2. In the other Round 2 game in the competition CBC/Portobello will square off against Naomh Olaf.

Naomh Maur and Ballinteer St. Johns B square off tomorrow night in Group A of the Junior 1A competition. Maurs were 5-13 to 1-04 winners against Naomh Jude B in the opening round. Judes sit out Round 2 on their bye week.

In Group B it’s Crumlin entertaining Faughs/Celtic B tomorrow night. Crumlin’s opening game last week against Castleknock was postponed to due player involvement in the All Ireland Minor Camogie Championship and will be played after the final round has been completed.

In the 1B competition, Erins Isle B face Naomh Mearnog B, with Naomh Barrog facing Thomas Davis.

Last week, Naomh Mearnog lost out to St. Vincents C on a 5-05 to 2-04 scoreline. Vincents get their bye week this week in the five round competition. Thomas Davis were 1-13 to 0-09 winners over Erins Isle, so the Isles girls will be looking to bounce back tomorrow night. 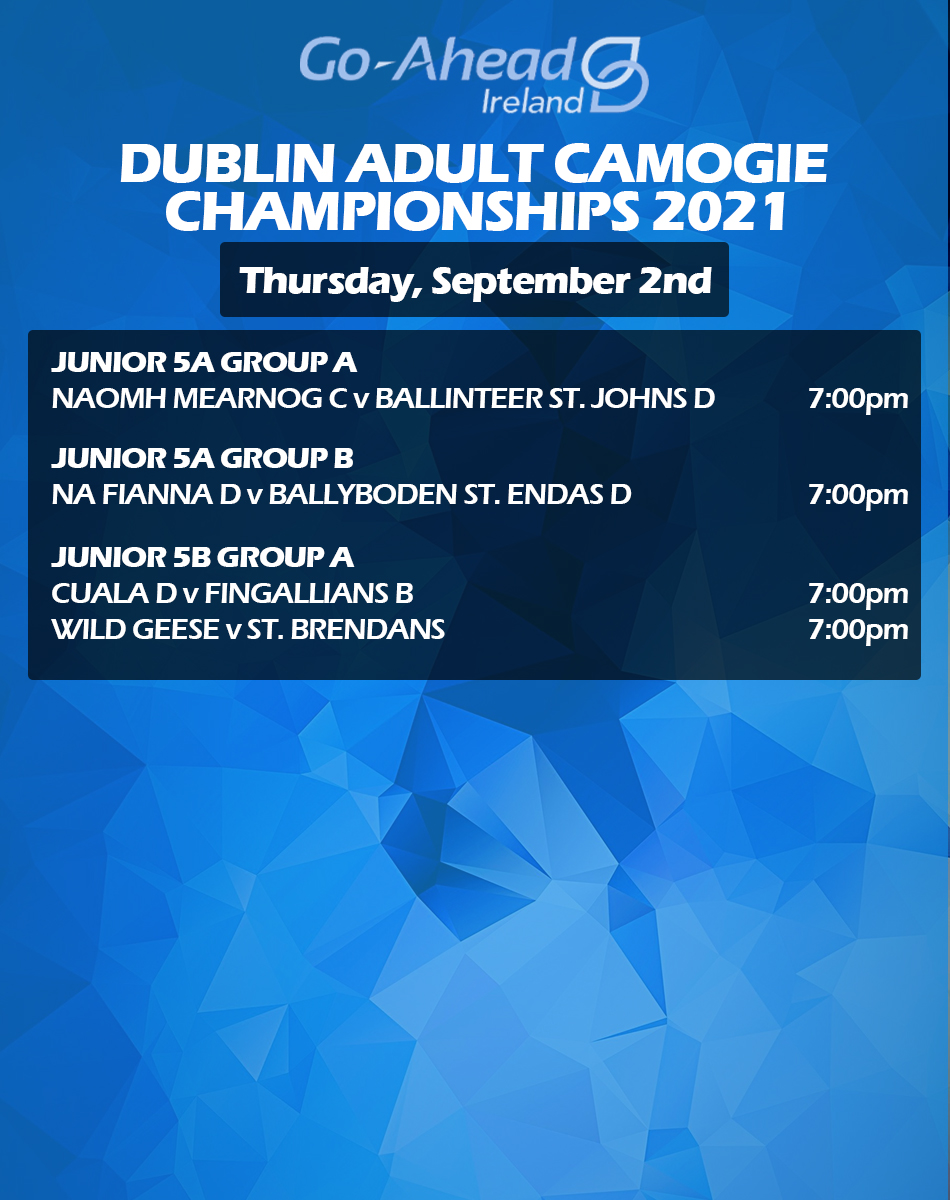 Naomh Mearnog C and Ballinteer St. Johns D will square off in Group A tomorrow night in the Junior 5A competition. This is Ballinteer’s first game of the competition as they had their bye in Round 1. Mearnogs were 7-05 to 0-05 winner over Lucan E last week, as Lucan sit into their bye this week.

In Group B its Na Fianna D going head to head with Ballyboden St. Endas D tomorrow night. Na Fianna had a 5-05 to 2-06 win over Erins Isle C in Round 1, with Isle getting their bye week in Round 2.

Wild Geese and St. Brendans both recorded wins in Round 1 of Junior 5B. And they’ll face each other in tomorrow night’s Round 2 clash. Geese were 10-08 to 0-00 winners at Fingallians B, while Brendans secured a 3-07 to 0-01 win over Cuala D.

Cuala and Fingallians will compete in the second Round 2 game of the competition.

And that’s the round up of all tomorrow night’s games in the Dublin Adult Camogie Championship. Join us after full time for all the details and scores.