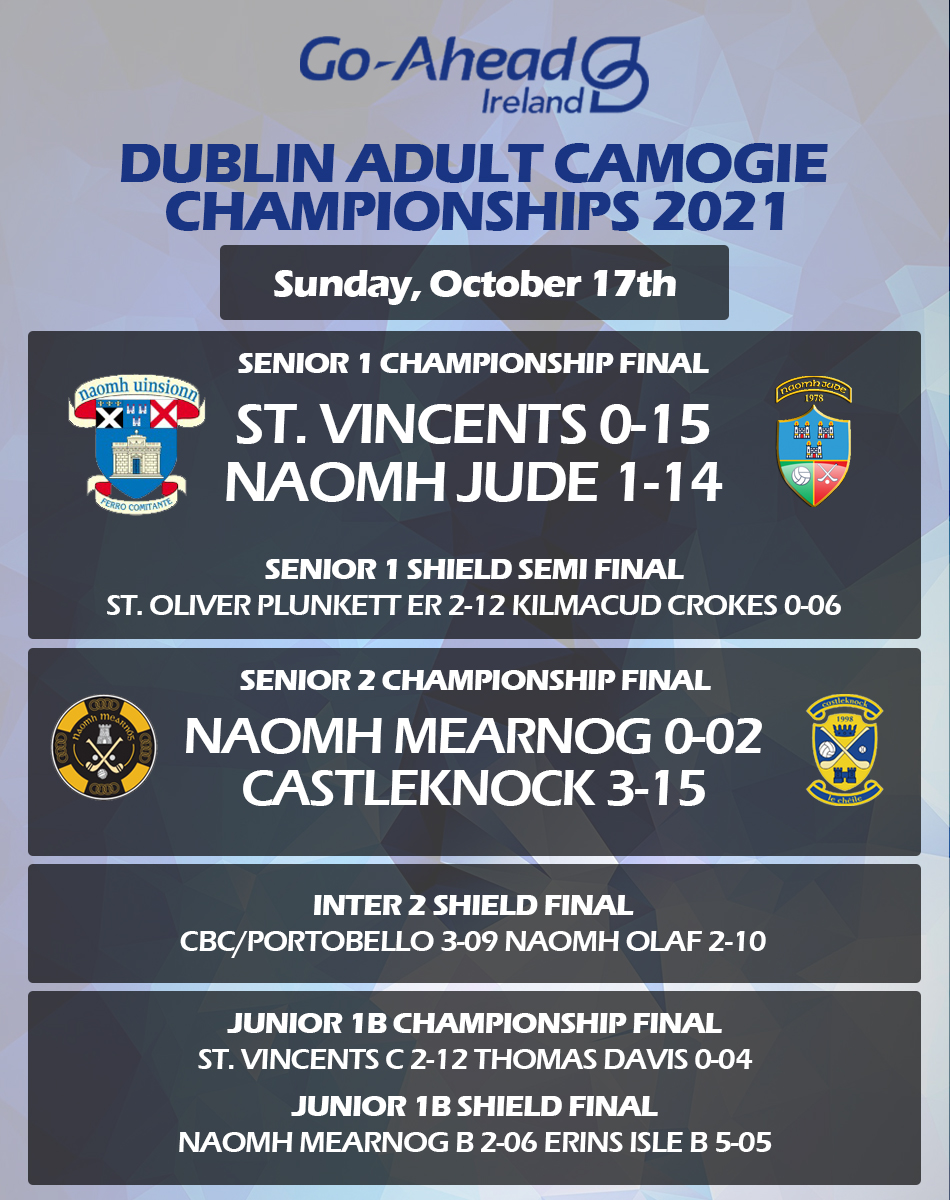 For the second year in a row, Naomh Jude were today crowned Dublin Senior 1 Camogie Champions. And there couldn’t have been a better showcase for Camogie in the county as the two best teams in the top flight went toe to toe. And for the majority of the game you couldn’t tease the sides apart. It took an 41st minute Hannah Begley goal to swing the tie in Naomh Jude’s favour for the first time.

Vincents did draw level a minute later, but shortly after the second half water break a Leah Butler point pushed Jude’s lead to 0-03. And with the end of the game on a knife edge Judes held on despite pressure from St. Vincents to claim their second title on the bounce.

In today’s Shield Final, St. Oliver Plunkett Eoghan Ruadh were clear 2-12 to 0-06 winners over Kilmacud Crokes ending the Senior 1 competition for another year.

Castleknock turned on the charm in the fisrt game of the Abbotstown Double Header to comfortably win the Senior 2 Championship title.

Lead by full forward and player of the match Aisling O’Neill Castleknock were already 1-07 to 0-01 at the half time break. And that continued into the second half when substitute Aisling Andrews and Whelan hit two more goals. Naomh Mearnog had no answer despite never dropping their heads. And it was the first game the Portmarnock side had lost all year.

The day belonged to Castleknock, who were worth every cent of the entrance fee, and their supporters left Abbotstown content.

Inter 2 and Junior 1B Championship

To close the Inter 2 competition CBC/Portobello captured the Sheild, beating Naomh Olaf by 3-09 to 2-10.

St. Vincents C captured the Junior 1B title this morning, beating Thomas Davis emphatically by 2-12 to 0-04. And Erins Isle B finished their 1B Season on a high beating Naomh Mearnog B by 5-05 to 2-06.

So, apart from the Junior 3A Championship and Shield deciders, we’ve come to an end to this year’s Dublin Adult Camogie Championship. Credit really goes to the County Board, the referees and officials, and of course the clubs, teams and mentors for going the extra mile to pull the Championship together in such a short space of time in a very difficult period for everyone in the country.