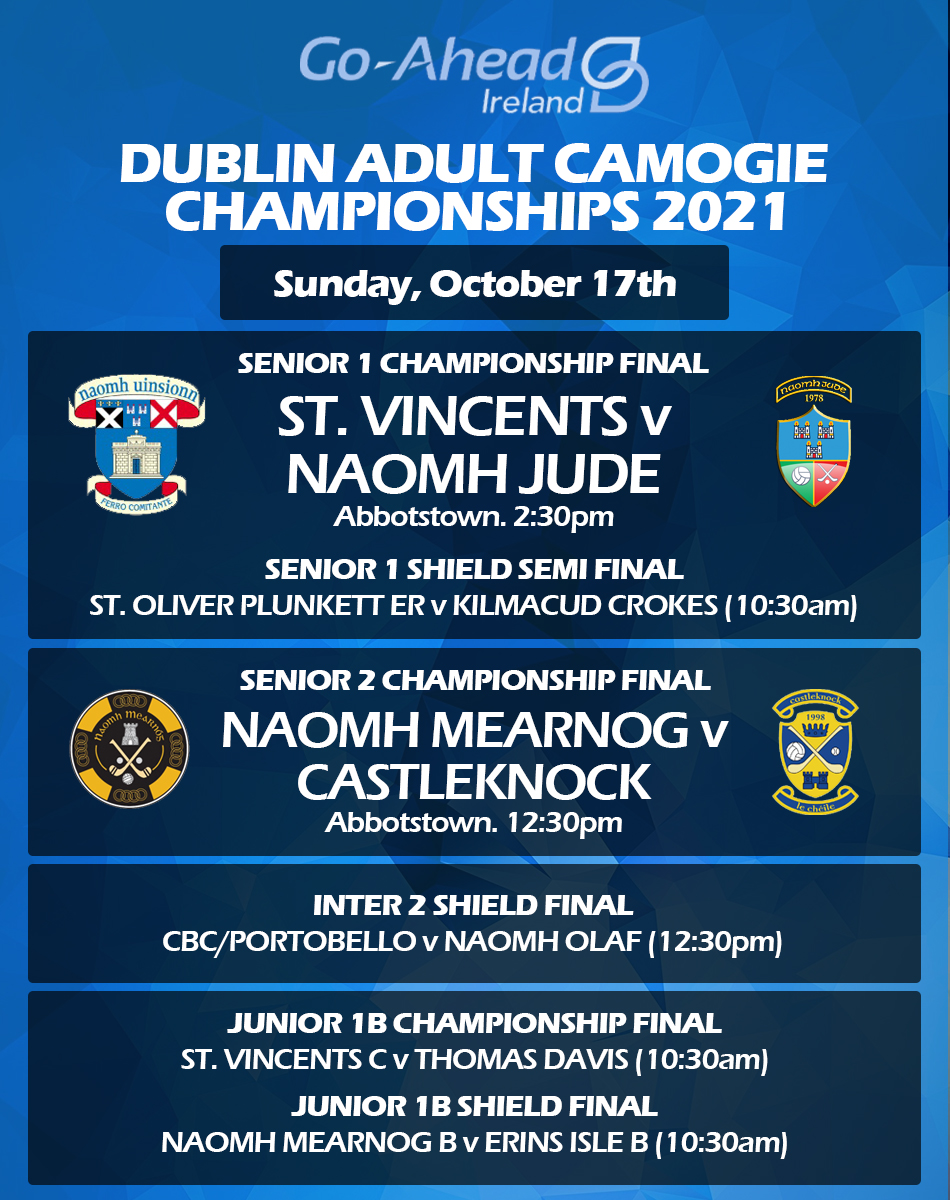 Tomorrow we return to the familiar surroundings of the National Sports Campus in Abbotstown where the Senior 1 and Senior 2 competitions come to a close in the 2021 Dublin Adult Camogie Championship. And we see the end of both the Inter 2 and Junior 1B competitions too. Let’s bring you all the details.

For the third year in succession, St. Vincents and Naomh Jude are the last 2 standing in the Senior 1 Championship. And in this head to head their are one win a piece. Vincents last captured the title in 2019, and Judes picked up the silverware in last year’s decider.

Group 1 winner Vincents completed a perfect round robin, registering 6-42 along the way. Convincing wins over Kilmacud Crokes, Na Fianna and Lucan Sarsfield set up a Semi Final with Group 2 runners up Ballyboden St. Endas. And there were 7 points seperating the sides at full time with Vincents running out 0-19 to 1-09 winners.

Despite losing to Ballyboden in the opening round, Judes weren’t derailed beating Faughs/Celtic by 3-17 to 0-07 and St. Oliver Plunkett Eoghan Ruadh by 2-11 to 0-10 in the following rounds. And in perhaps a tougher encounter against Na Fianna in the last four, Judes eventually ran out 0-14 to 0-12 winners. If tomorrow’s Final is even close to the competitiveness of the last 2 years, we’re in for a real treat.

Elsewhere in the Senior 1 competition, St. Oliver Plunkett Eoghan Ruadh and Kilmacud Crokes will square off for a chance to face Lucan Sarsfield in the Senior 1 Shield final.

In what will always be the best curtain raiser to the Senior 1 Championship, Naomh Mearnog and Castleknock will battle it out for this year’s Senior 2 Championship title in the earlier game in Abbotstown.

Mearnog’s went three for three in Group 1, seeing off Ballinteer St. Johns, Cuala and Erins Isle to secure the top spot and a Semi Final berth against Good Counsel. They won that with a comprehensive 4-07 to 1-10 scoreline.

Castleknock tied with Good Counsel at the top of Group 2, but a slightly more superior points difference saw them advance to face Cuala in their last four clash. And their 2-14 to 0-15 win over the Dalkey side saw them into tomorrow’s decider.

CBC/Portobello and Naomh Olaf will end this year’s Inter 2 competition contesting the Shield tomorrow morning. It draws a close to the Inter 2 competition which Whitehall Colmcille crowned champions beating Lucan Sarsfield in a thrilling 5-12 to 1-11 final last weekend.

St. Vincents C and Thomas Davis will close out the Junior 1B Championship tomorrow in a battle for the title. Vincents finished the group unbeaten, and have already laid a marker against Thomas Davis beating them 7-09 to 0-03 in the final round. So Thomas Davis will want some revenge for that defeat.

Naomh Mearnog B and Erins Isle B will complete their 2021 campaigns contesting the Junior 1B Shield tomorrow morning.

We’ll bring you the results from all these Dublin Adult Camogie Championship games once the action is completed tomorrow.

Dublin Premier Junior’s One Step From Their Moment In Time