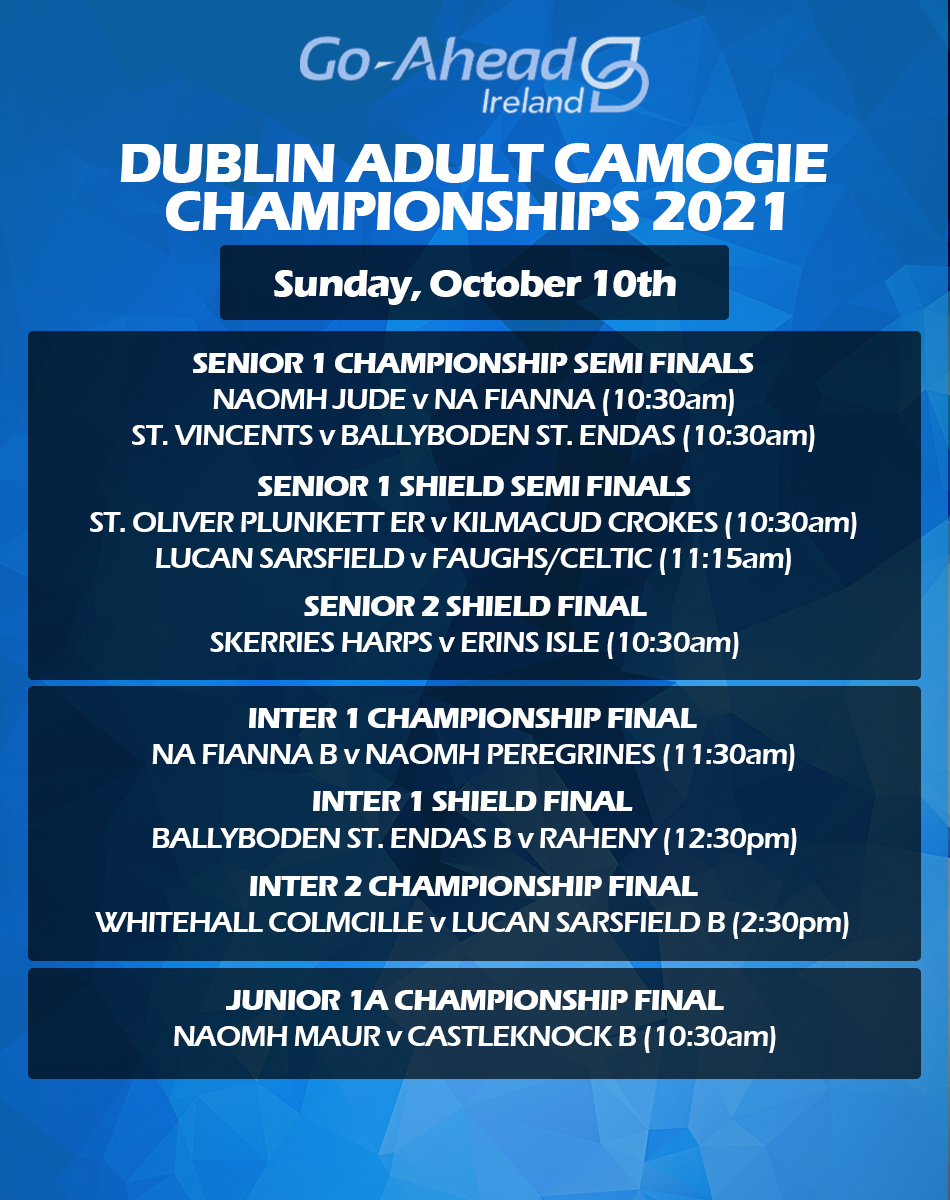 It is quite literally crunch time in almost all of this year’s competitions in the Go Ahead Dublin Adult Camogie Championship. Tomorrow, another eighteen games will be decided. We’ll have Championship and Shield Semi Finals and Finals, with the Senior 1 Semi Finals and both Inter Finals taking centre stage. Let’s get a full sweep on all tomorrow’s action.

Tomorrow morning, Naomh Jude, Na Fianna, St. Vincents and Ballyboden St. Endas will square off to decide who will contest the Senior 1 Championship. Will it be a repeat of last year’s Final, or will we have new finalists?

St. Vincents head into tomorrow’s Semi Final as Group 1 winners. They successfully saw off Na Fianna, Lucan Sarsfield and Kilmacud Crokes over three rounds and will be quietly confident going into tomorrow’s game. Their opponents Ballyboden St. Endas ended in a three way tie in Group B with Naomh Jude and St. Oliver Plunkett Eoghan Ruadh. And in the runner up slots, Boden shaded the slot by 1 score in points difference with Plunketts.

A more superior score difference kept Naomh Jude at the top of Group B and they’ll be battling Group A runners up Na Fianna tomorrow moring. Na Fianna dropped points in a loss to Vincents and an opening round draw with Lucan. But that means nothing as tomorrow those standing will be thrown out the window. A place in this year’s Senior 1 Final is at stake.

Plunkett’s, Lucan Sarafield, Kilmacud Crokes and Faughs/Celtic will contest the Semi Finals of the Senior 1 Shield tomorrow morning, all looking to finish their seasons on a positive note.

From 11:30 tomorrow morning Trinity Sports Grounds in Santry will host a double header of Inter Championship action. The first of the two games will be the Inter 1 Final between Na Fianna B and Naomh Peregrine.

Both of this year’s finalists came out of the Group A competition. So these two sides have already met way back in Round 1. That day it was a winning 2-17 to 3-09 scoreline for Na Fianna, but that will count for nothing tomorrow. Na Fianna knocked St. Vincents B out in their Semi Final, with Peregrines knocking Group B winners Naomh Brid out in their last four clash.

There’s no denying the calibre of both the Inter 2 Championship Final opponents tomorrow afternoon. Whitehall Colmcille completed a perfect Round Robin, winning all four of their round games, including a 5-07 to 1-08 victory over Lucan who they face tomorrow.

Ballyboden St. Endas B and Raheny will end their campaigns tomorrow as they square off in the Inter 1 Shield Final at 12:30pm.

Winners of both Group A and B in the Junior 1 Championship wil contest tomorrow’s Final. Naomh Maur and Castlknock B remain unbeaten to date. While Maurs got a walkover in their Semi Final, Castleknock battled Ballinteer St. Johns B and came out 1-08 to 0-08 winners two weeks ago. Tomorrow will be as close as you could expect. 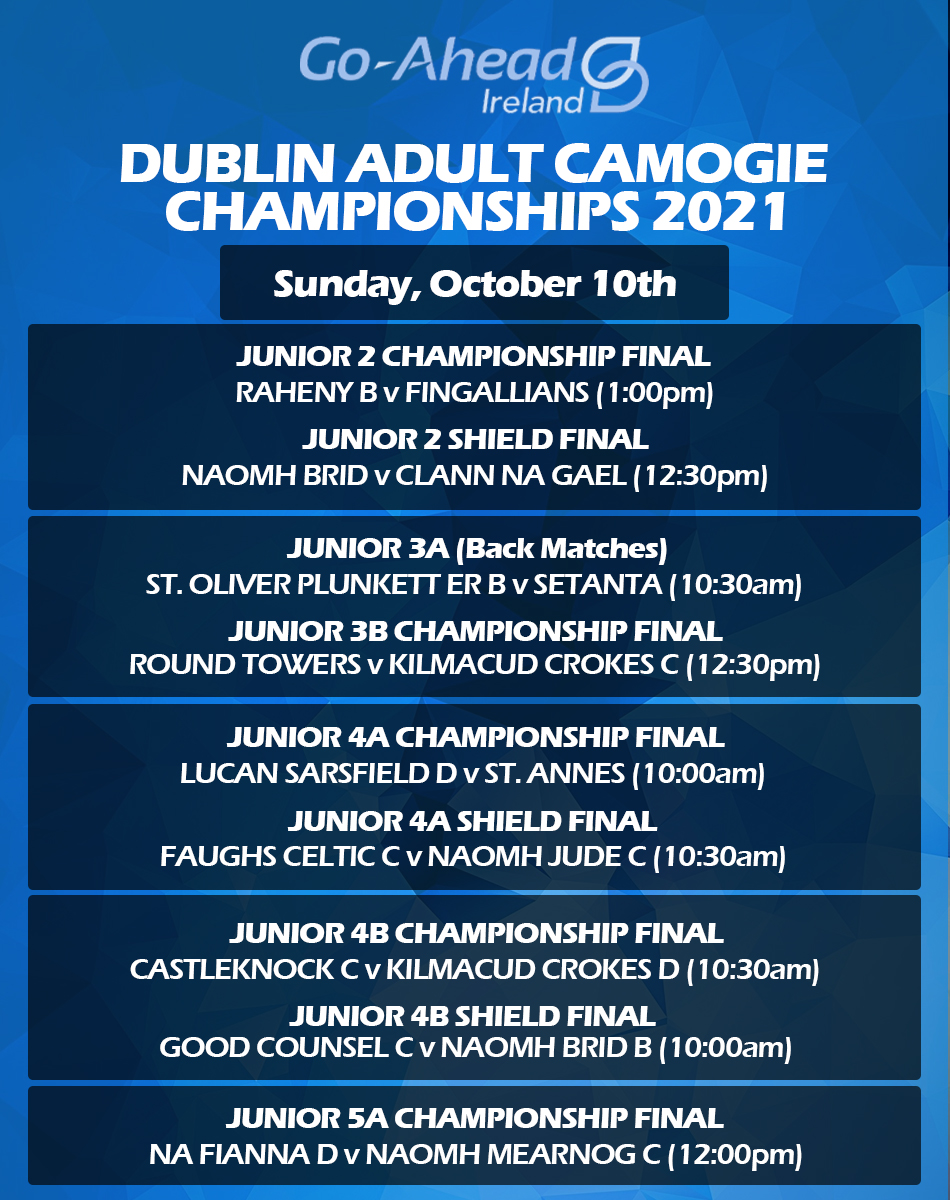 Raheny B and Fingallians finished top of their respective Groups in the Junior 2 Championship. Raheny were 1-12 to 1-03 winners over Na Fianna B in their Semi Final. Fingallians secured their place in tomorrow’s decider with a 6-24 to 2-04 victory over Good Counsel B

In the Shield competition in Junior 2, Naomh Brid and Clann Na Gael will go head to head to end their 2021 Championship campaign.

St. Oliver Plunkett Eoghan Ruadh B and Setanta will play a rescheduled Round 4 fixture tomorrow to complete the Round Robin phases in Junior 3A. The game between Ballyboden St. Endas C and St. Finians was conceded by Finians. So depending on the outcome of tomrrow’s game, Plunketts could still find themselves in a Championship decider.

Round Towers sent Group A winners Cuala B out in their recent Junior 3B Semi Final and have earned their spot in tomorrow’s Championship Final against Kilmacud Crokes C. Crokes were unbeaten in Group B and beat Naomh Olaf B by 4-19 to 0-02 in their Semi Final.

St. Annes went four for four in Group A of the Junior 4A Championship. And they followed that with a 3-13 to 5-04 win over Naomh Peregrine B two weeks ago. Lucan Sarafield D were 4-07 to 0-05 winners over Clontarf after their unbeaten run in Group B.

In the Junior 4A Shield, Faughs/Celtic C and Naomh Jude C will go head to head for the honour and a good end to their respective seasons.

Castlknock C and Kilmacud Crokes D will contest tomorrow’s Junior 4B Championship Final. Castleknock, who were runners up in Group A faced and beat Group B winners Cuala C.

Crokes, who only dropped round robin points to Cuala, had a one point victory over Naomh Maur B in their Semi Final, sending them into tomorrow’s decider.

A Junior 5A title awaits Na Fianna D and Naomh Mearnog C tomorrow as both Group A and B Winners square off. Na Fianna were 8-05 to 0-02 winners over Ballinteer St. Johns D, while Naomh Mearnog scored a 4-10 to 1-05 win over Erins Isle C.

Be sure and join us tomorrow night when we’ll round up all tomorrow’s important results in the Go Ahead Dublin Adult Camogie Championship.