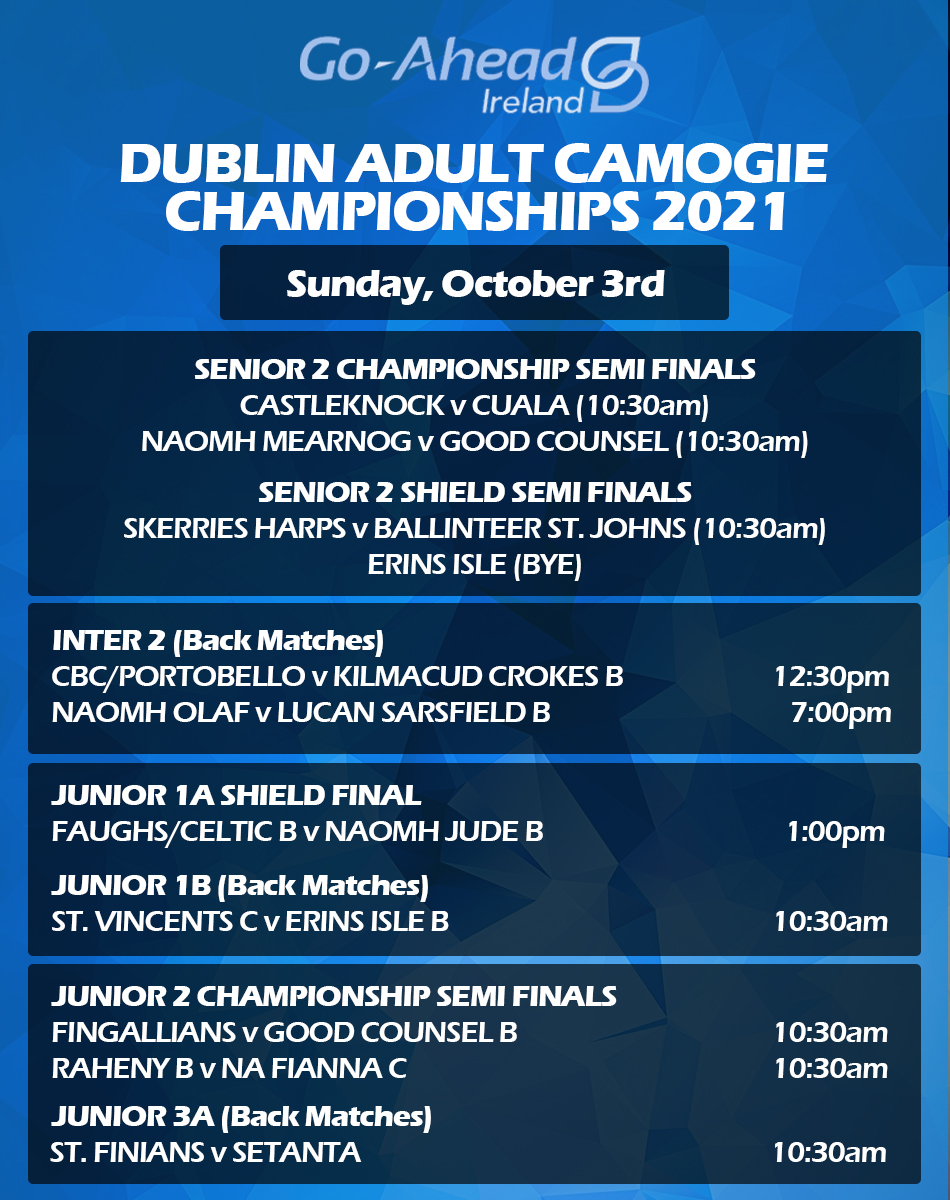 Castleknock, Good Counsel, Naomh Mearnog and Cuala have all earned their slots in this year’s Senior 2 Championship Semi Finals.

A score difference of 2 points saw Castleknock top Group B after a tied game in Round 2 couldn’t seperate them from Good Counsel. And they’ll face Cuala tomorrow in the first of teh 2 Semi Finals. Cuala were runners up in Group A winning one, drawing one, and losing to Naomh Mearnog in Round 2.

Naomh Mearnog finished Group A with a 100% record, beating Cuala, Ballinteer St. Johns and Erins Isle. Tomorrow’s opponents Good Counsel beat Skerries Harps in their opener and then were deadlocked against Castleknock to finish their Round Robin campaign.

Erins Isle receive a bye in the Shield Semi Finals stage and will watch on with interest as Skerries and Ballinteer battle it out for a place in the final.

A tidy up of games tomorrow to complete the Inter 2 Round Robin. Whitehall Colmcille and Lucan Sarsfield B have finished in first and second place. And tomorrow’s games probably won’t change that. CBC/Portobello and Naomh Olaf can finish on four championship points but Lucan’s score difference is far superior that it’s doubtful any result tomorrow will make a difference. CBC face Kilmacud Crokes B, and Olafs face Lucan.

Junior 1A and 1B Championships

Tomorrow Faughs/Celtic B and Naomh Jude B will finish out their Championship contesting the Junior 1A Shield Final at 1pm.

In Junior 1B, St. Vincents B have 2 back matches to clear down, and are sitting in second place in the table. If they win tomorrow against Erins Isle B they would move above Thomas Davis on score difference with one game still to be played against Naomh Barrog (TBC). Isles still have an outside chance of reaching the knockouts, but will need a strong showing in tomorrow’s game.

The last four in the Junior 2 Championship will do battle tomorrow for a place in the competition’s decider. Fingallians and Na Fianna C  come out of Group A, with Raheny B and Good Counsel B topping Group B.

Fingallians and Good Counsel will go head to head, with Raheny and Na Fianna battling for a Final slot in the other Semi.

St. Finians and Setanta play their rescheduled Round 1 game tomorrow morning. Lucan Sarsfield C and Ballyboden St. Endas C are currently holding the first and second position in the Junior 3A table. But there are stil a couple more rescheduled games to play out over the next couple of week.

Make sure to stay tuned tomorrow when we’ll bring you a full update on all the Adult Camogie Championship games when the action is complete.