We’re through the rounds in the Dublin Junior 1, 2 and 3 Camogie Championship and we have our qualifiers 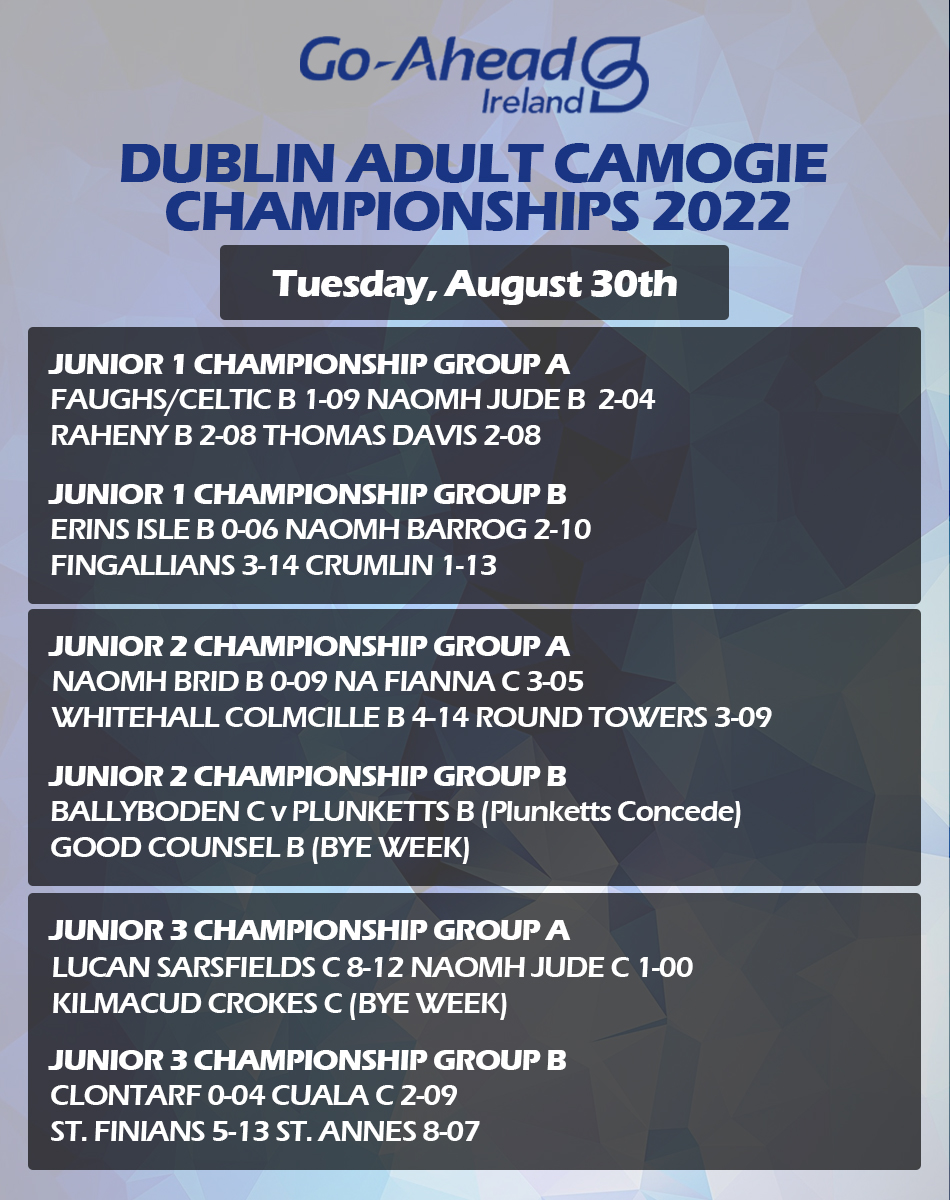 Despite Naomh Jude B losing to Faughs/Celtic B last night they still qualify with Faughs to advance to the semi finals of the Junior 1 Camogie Championship. Faughs took a 1-09 to 2-04 win last night to make it 2 wins from 2. Judes also secure 2 wins and becuase they were the losing side last night, the head to head putd Faughs tops of the group pairing them with the runners up in Group B. Raheny and Thomas Davis played out a 2-08 a piece tied game in their final match and both will contest the Shield in teh competition.

Fingallians finished clear winners in Group B as their 3-14 to 1-13 win over Crumlin last night was their third on the bounce. They’re joined by Naomh Barrog who had a 2-10 to 0-06 victory over Erins Isle B in their final round game making it 2 wins from 3. Isles and Crumlin will play in the semi finals of the Shield competition for another chance at some silverware.

A massive matchup between Whitehall Colmcille B and Round Towers last night saw Whitehall pick up their third round robin win giving them the top spot over Towers. Despite losing by 4-14 to 3-09 Towers finished runners up in teh group so they’ll join Whitehall in the Junior 2 Semi Finals. Na Fianna C and Naomh Brid B will contest the final of the shield in this grade as St. Oliver Plunkett Eoghan Ruadh B conceded all their round games so are not eligible.

In the 3 team Group B competition Good Counsel finished top of the tabel with 2 wins despite being on a bye last night. A walkover for Ballyboden St. Endas C from Plunketts sees them in a semi final and still in with a chance to challenge.

Lucan Sarsfields C and Kilmacud Crokes C qualify for the semi finals in the Junior 3 Camogie Championship. Lucan scored a whopping 8-12 to 1-00 win over Naomh Jude C last night and with Crokes already securing a win over Judes in Round 2 that was enough to secure their place in the last four.

Cuala C secured their second win last night beating Clontarf by 2-09 to 0-04 seeing them reach the knockouts alongside St. Annes. Annes were 8-07 to 5-13 winners over St. Finians last seeing night seeing Finians lose out on a Championship Semi Final, but will platy the winners of the Judes and Clontarf for the chance of picking up the Junior 3 Shield.

We’ll back again tomorrow night to being you the last rounds of teh Junior 4, 5 and 6 Camogie Championships. We’ll then turn our focus to the last round in the Dublin Senior Football Championship. Make sure to join us.