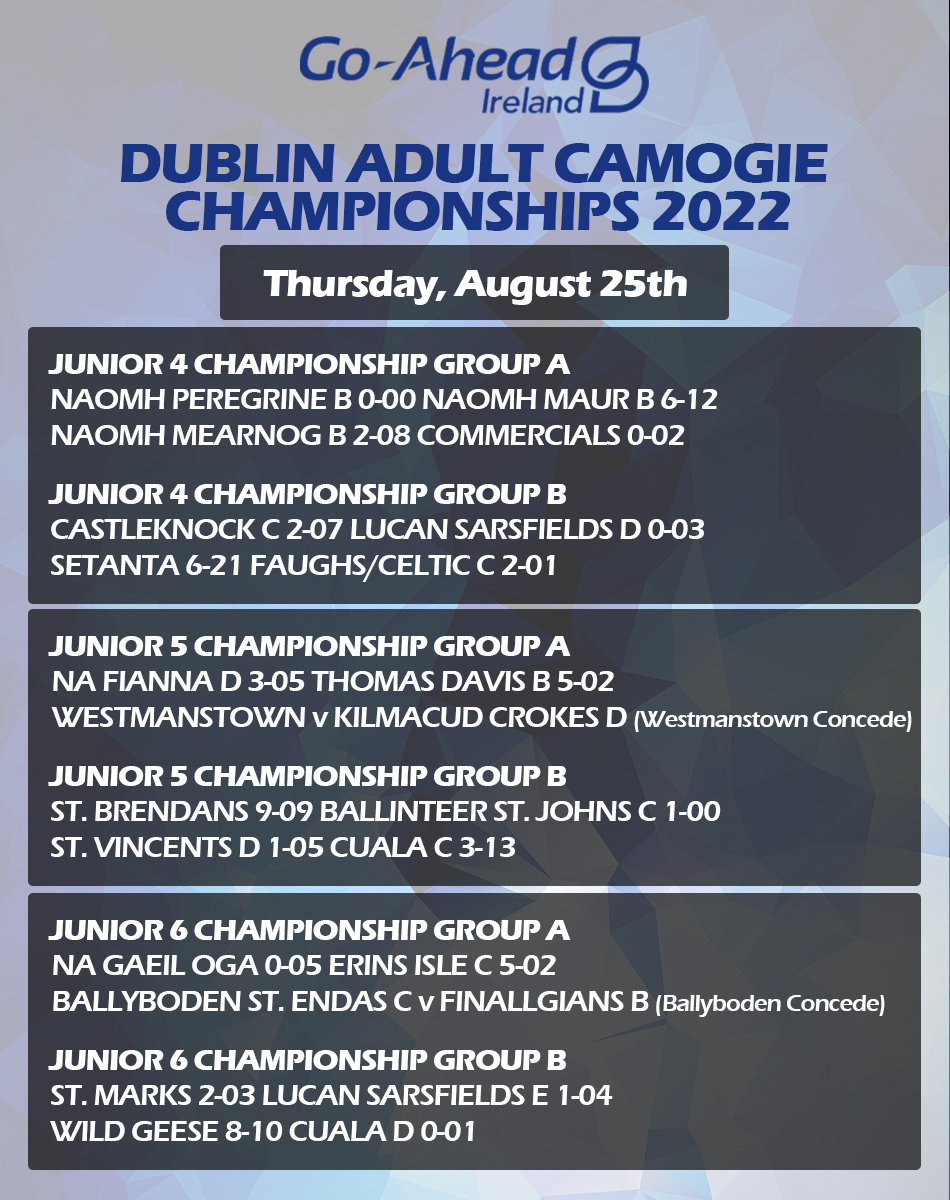 Naomh Maur B look set to qualify for the knockout stages of the Junior 4 competition after a second win in the championship. Their 6-12 to 0-00 victory over Naomh Peregrine B puts them at the top of the table. Naomh Mearnog B gave their chances a lift after their 2-08 to 0-02 win over Commercials last night, but all is not lost for Commercials. They will have to face Maurs in the final round however. If Mearnogs can get a final round win over Peregrines that should hopefully see them in a good position.

Setanta and Castleknock C have set up a very tasty tie in the final round after both sides registered back to back wins last night in Group B. Setanta racked up another big scoring tally with a 6-21 to 2-01 win over Faughs/Celtic C leaving Faughs at the bottom of the group table with Lucan Sarsfields D. Lucan suffered a second loss to Castleknock on a 2-07 to 0-03 scoreline.

Thomas Davis B and Kilmacud Crokes D share the top postitons in Group A of the Junior 5 Camogie Championship, albeit thanks to walkovers received from Westmanstown. Thomas Davis recorded a 5-02 to 3-05 win over Na Fianna D last night, which was Na Fianna’s second defeat. They’re scheduled to face Westmanstown in teh final round. Kilmacud and Thomas Davis will square to decide the top spot in the group.

St. Brendans bounced back from their opening roun defeat to Cuala C with a comfortable 9-09 to 1-00 win over Ballinteer St. Johns C last night in Group A. Cuala also picked up a second win to top the group table. That 3-13 to 1-05 win over St. Vincents D sees them all but qualify for the knockouts. Brendans face Vincents in the final round hoping to pick up a win to bolster their challenge.

With Ballyboden St. Endas conceding in Group A it sees Erins Isle C and Na Gaeil Oga challenging for the top spot in the Group A table. Isles took a slight advantage last night beating Oga by 5-02 to 0-05 ahead of facing Fingallians B in the final round. Oga will get a walkover form Boden next week.

In Group B St. Marks are 2 for 2 after their 2-03 to 1-04 win over Lucan Sarsfields E last night. And Wild Geese added another victory to their tally with a 8-10 to 0-01 win over Cuala D. Marks and Geese will go had to head in the final round to decide who tops the group.

This Sunday sees the continuation of the Dublin Senior and Inter Camogie Championships with games throwing in from morning into the early afternoon so stay tuned.