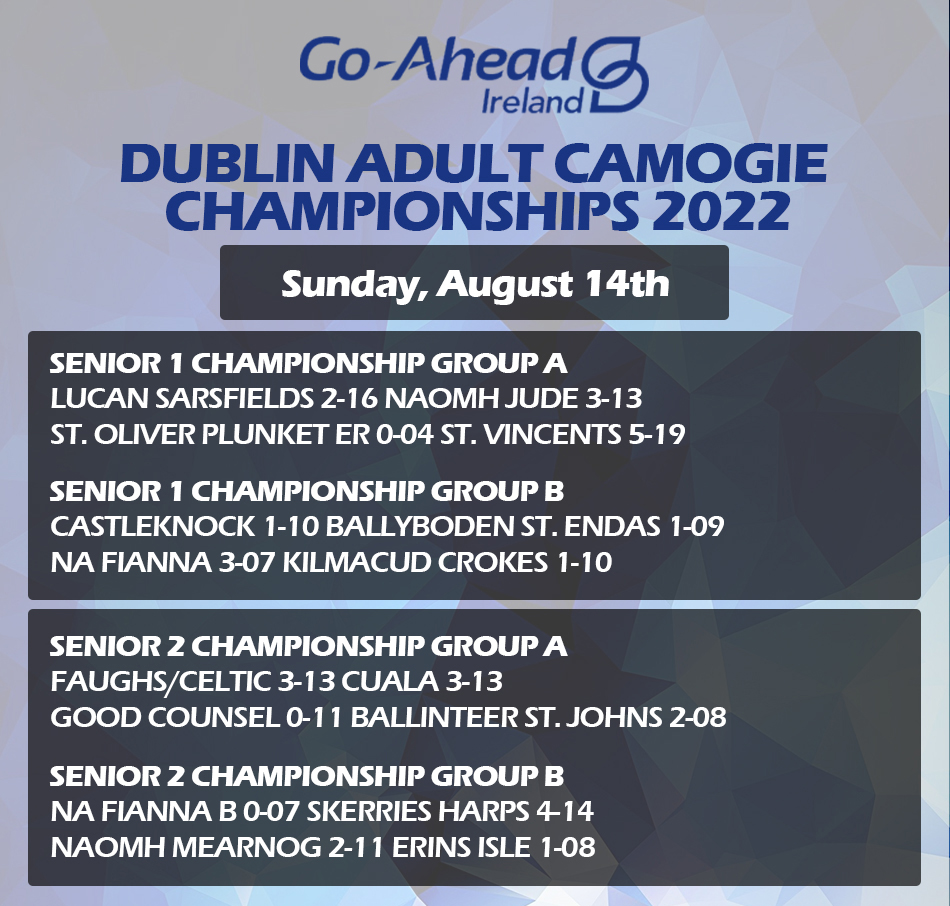 The group tables will never really tell us anything after only one round of any championship campaign. But the Group A standings are wide open after Round 1. Last year’s Senior 1 Camogie Champions Naomh Jude were held to a 2-16 to 3-13 tied game facing 2021 Shield winners Lucan Sarsfield. It’ll be a start Lucan will have enjoyed and look to build on when they test themselves against St. Vincents in 2 weeks time.

Without some key panel members St. Oliver plunkett Eoghan Ruadh suffered a huge 5-19 to 0-04 defeat at the hands of the 2021 beaten finalists St. Vincents. Plunketts will have an away trip to Naomh Jude in Round 2 on August 28th and will hope to improve. It leaves St. Vincents top of the Group A Table after the opening round, and a win against Plunketts in the next will see them through to the knockout stage of the competition.

Castleknock will be very pleased with their first Senior 1 Championship game. The newcomers who lifted last year’s Senior 2 title cut their cloth this morning. It might have only been a one point victory but a victory nonetheless against Ballyboden St. Endas. It will fill the Castleknock panel with confidence as they look towards their Round 2 game against Kilmacud Crokes.

A three point win for Na Fianna gets the Mobhi Road girls up and running in this year’s Senior 1 Campaign. And a repeat of their final round of 2021 beating Kilmacud Crokes by 3-07 to 1-10. Crokes will want to improve against Castleknock in 2 weeks time. For Na Fianna it’s away trip to Ballyboden St. Endas in Round 2.

In their first Senior 2 game following relegation from Senior 1 Faughs/Celtic have to share the points with Cuala. Cuala, beaten finalists last year, held the Senior 2 newcomers to a 3-13 a piece tie. Faughs will go to Ballinteer in 2 weeks time to try make up some points in the table.

That task won’t be easy as Ballinteer were three point winners over Good Counsel this morning. Counsel will need to head to Cuala in Round 2 in the hope of picking up their first win after this 2-08 to 0-11 defeat.

It was all Skerries Harps in their opening Group B game in Senior 2. They took away a comfortable 4-14 win over reigning Inter 1 Champions Na Fianna B. But Na Fianna will go back to the drawing board ahead of their Round 2 clash and a trip to Erins Isle in 2 weeks time.

Skerries move on to Naomh Mearnog who picked up a 2-11 to 1-08 win over Erins Isle this morning. Erins Isle picked up the Senior 2 Shield last season with Mearnogs beaten Senior 2 Championship Finalists so both sides will be looking to build in 2022. 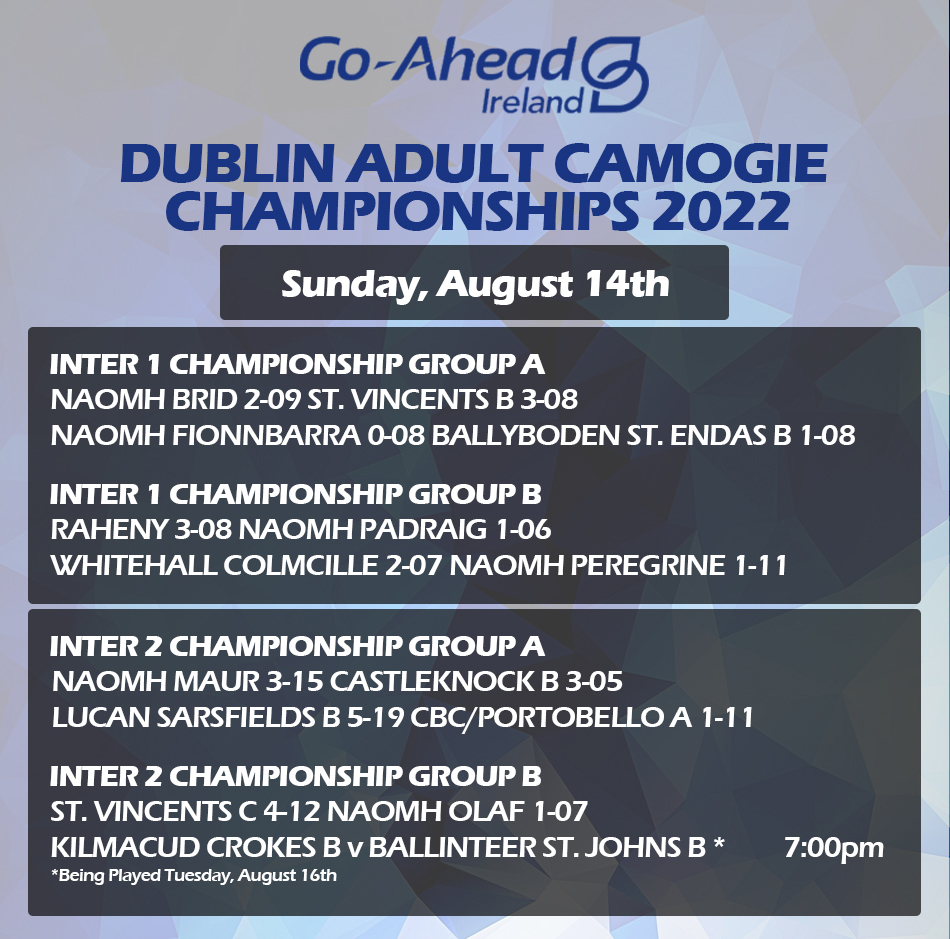 Positive start for St. Vincents B in a repeat of last year’s Round 1 clash with Naomh Brid B. In 2021 it was Brigids who came away with the win but today it was Vincents on a 3-08 to 2-09 scoreline. They’ll welcome Finbars in Round 2 to Mobhi Road.

And Naomh Fionnbarra will be looking to improve after a 0-08 to 1-08 defeat at the hands of Ballyboden St. Endas B this afternoon. That win put Boden top of Group A by a single score to Vincents, confident ahead of welcoming Brigids in Round 2.

Raheny and Naomh Peregrine picked up maximum points in their respective opening round games earlier today. Raheny, who were beaten shield finalists last year registered a convincing 3-08 to 1-06 win over Naomh Padraig. Pats will be hoping for an improvement in the next round when they take on Whitehall Colmcille.

For Whitehall it will be disappointment in their first Inter 1 Championship game. The Inter 2 Champions were the bounce of a ball away from a point today, but the spoils go to Naomh Peregrine on a 1-11 to 2-07 scoreline. But Whitehall will have to be content with their perfirmance in the step up in grade.

The clash of the Junior A Champions and Runner up, and it was Champions Naomh Maur who got their Inter 2 Campaign off to a winning start with a 3-15 to 3-05 win over Castleknock B. But life in Inter 2 will start for real in round 2 for these sides as they face more established teams in the grade.

Those teams are Lucan Sarsfields B and CBC/Portobello. Today it was beaten Inter 2 finalists Lucan who picked up the win over CBC on a huge 5-19 to 1-11 scoreline. That’s another win for Lucan who faced CBC in the final round of last year’s rounf robin phase. lucan travel to Castleknock in 2 weeks time, with CBC/Portobello welcoming Naomh Maur.

Just the one game in Group B of this Inter 2 competition played today. And first blood drawn by St. Vincents C who secured a 14 point win over Naomh Olaf on a 4-12 to 1-07 scoreline. They’ll make the trip to Ballinteer St. Johns B in Round 2 with Olafs welcoming Kilmacud Crokes B.

As mentioned the game between Kilmacud Crokes B and Ballinteer St. Johns B will be played this Tuesday evening, August 16th.

This Tuesday the action gets underway in the Junior 1, 2 and 3 competitions, with Junior 4, 5 and 6 getting up and running this Thursday.