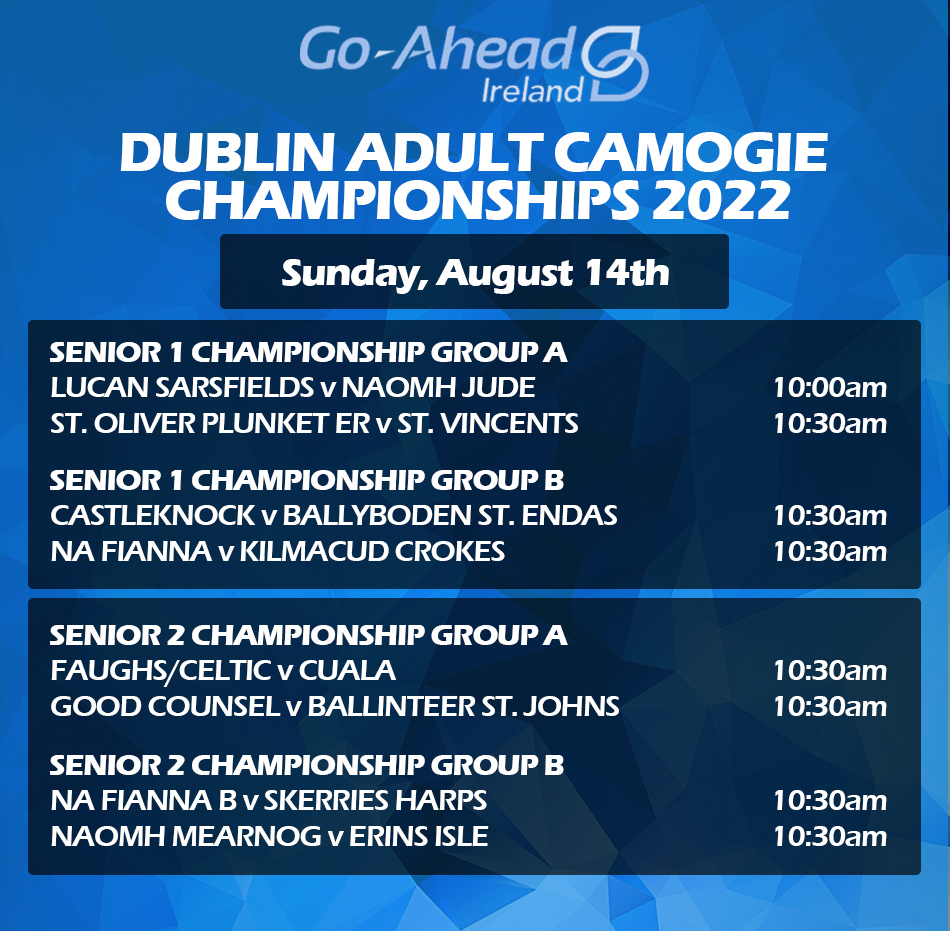 There’ll be a nice early start tomorrow morning to kick off the 2022 Dublin Adult Camogie Championships. And no better way to start than showcasing the Senior 1 and 2 competitions in the morning followed by both Inter Championships in the afternoon. And on Tuesdays and Thursdays starting next week we’ll have details on all the Junior competitions as they get up and running. But lets focus on tomorrow’s Senior and Inter action.

On October 17th last year Naomh Jude were crowned Senior 1 Champions for the second consecutive season. And the reigning Champions will get the 2022 Championship up and running as they face last year’s Shield winner Lucan Sarsfields. Lucan will obviously want to improve on last year’s Championship season, and will have a difficult opening encounter in Judes.

Beaten Championship finalists St. Vincents start their campaign with a trip to beaten Shield finalists St. Oliver Plunkett Eoghan Ruadh tomorrow morning. Only  points seperated Vincents and Judes in last year’s decider and it would mean the world to the ladies from Marino to reclaim their beloved Senior 1 title this year. Plunkett’s will have been both pleased and disappointed last year. They finished last year’s Group B campaign level on points with Judes and Ballyboden St. Endas, picking up two wins in three games.

Senior 2 Champions Castleknock start life in Senior 1 with an opening tie against the established top tier Ballyboden St. Endas. Castleknock dismantled Naomh Mearnog in last year’s Senior 2 decider and will be relishing the chance to challenge all their Senior 1 opponents this year. Ballyboden won’t make it easy for them, but it will be great to see Castleknock in the top tier.

Na Fianna and Kilmacud Crokes square off in the second Group B tie tomorrow, both hoping to improve on last year’s form. Na Fianna picked one win and one draw in last year’s competition, with Crokes only registering a draw. So this could be a tight contest between the north and south side teams.

Relegated from Senior 1 last year Faughs/Celtic start life in Senior 2 with an opening round tie against beaten Senior 2 semi finalists Cuala. Cuala came up against eventual champions Castleknock in the last 4 and were defeated by 5 points, but outside of that had a relatively good campaign. Faughs will want to make a return to Senior 1 action so will want to get off the the perfect start.

Good Counsel reached the Semi Finals last year losing out to Naomh Mearnog for a deciding slot. They’ll get the ball rolling with a home tie against Ballinteer St. John’s who missed out on a Shield Final slot by a point losing to Skerries Harps in the Semi Finals.

Na Fianna B picked up last year’s Inter 1 Championship title and promotion to Senior 2. And they’ll relish the challenge of Skerries Harps in their opening game in Senior 2. Skerries ended up in last year’s Shield Final but lost out to Erins Isle in that contest. Na Fianna will want to make their mark, but Skerries will want to be challenging for the Senior 2 title.

It’s beaten Championship finalists Naomh Mearnog versus last year’s Shield winners Erins Isle facing each other in the opening round. Mearnogs were three for three in last year’s Round Robin phases, before adding a semi final win over Good Counsel. But were picked apart by Castleknock in the Senior 2 decider. Erin’s Isle enjoyed their first year in Senior 2 with a draw against Cuala and a very near miss losing by 1 point to Ballinteer before being well beaten by Mearnog’s in their final round. They’ll be looking to build on that in the new season. 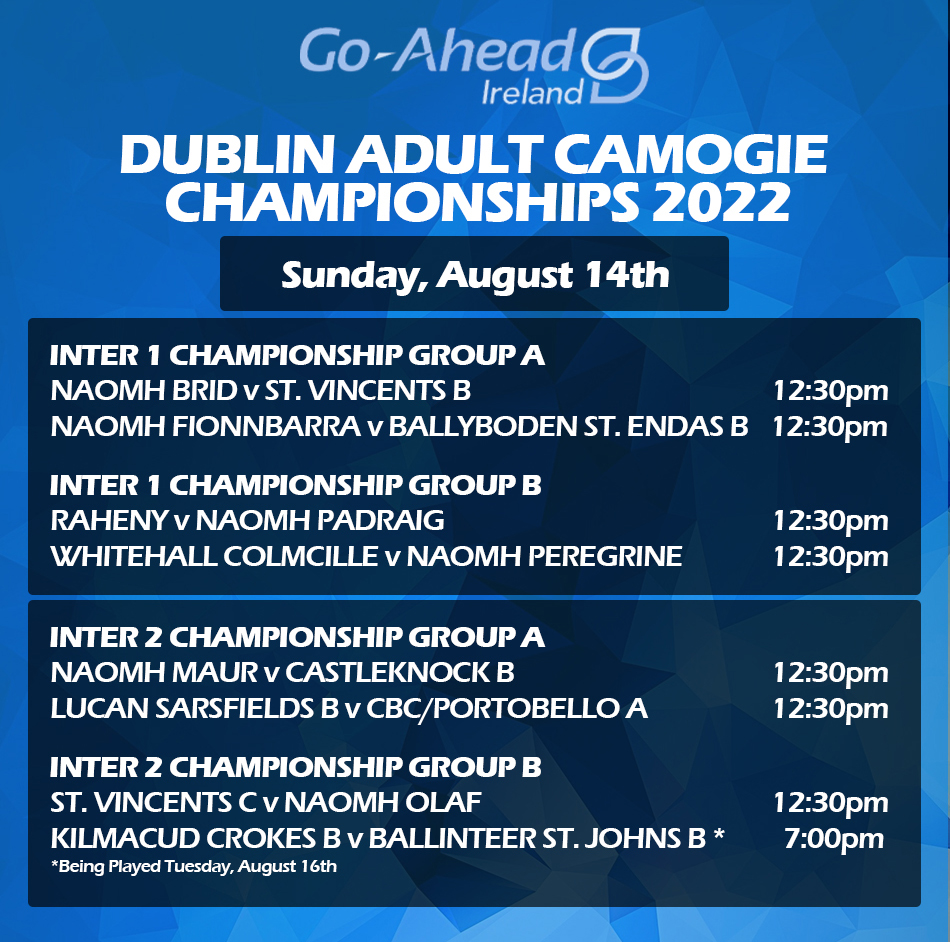 Naomh Brid reached last year’s Inter 1 Semi Finals. Sadly that was as far as they got, losing to Naomh Peregrine by a goal on a 3-05 to 2-05 scoreline. But they topped Group B winning two out of three games. Tomorrow they go head to with St. Vincents B, a team they’ll know very well from last year’s campaign. They faced each other in Round 1 a year ago with Naomh Brid winning on a 3-12 to 1-06 scoreline. Vincents also reached the last 4 losing to Na Fianna B in that game.

Naomh Fionnbarra will want to improve in Inter 1 this season. They didn’t pick up a win in the rounds last year and were beaten by Ballyboden B in the Shield Semi Final so it’s all to play for again this season. They’ll face Boden in their opening game, the team that eventually picked up the 2021 Shield.

Raheny won one of three round robin games in the Inter 1 competition last year and beat Naomh Padraig to reach the Shield Final. Sadly they were beaten Boden in the decider. They’ll face Naomh Padraig tomorrow in their opener, with Pats hoping to improve on a disappointing championship last year that saw them only draw one round game.

Whitehall Colmcille lifted the Inter 2 Championship title last year and will start their time in Inter 1 with a tough contest against last year’s beaten finalists Naomh Peregrine. They lost to Na Fianna B in the opening round and then again at the second time of asking in the Championship final. So they’ll have ambitions of taking the Inter 1 title this season.

Junior A Champions Naomh Maur and runners up Castleknock B start life in Inter 2 as they left off in the Junior 1 Final last year. And it will give them some time to get used to the step up before facing more established Intermediate opponents. Both sides ran unbeaten through the rounds last year and the semi finals. But in the Championship decider there could only be one winner, which Maurs succeeded on a 3-14 to 2-07 final score.

Beaten finalists Lucan Sarsfields B will face Shield winner CBC/Portobello tomorrow as they both continue life in the Inter 2 Championship. Lucan were well beaten by Whitehall in last year’s Championship Final but had challenged well up to that point so they’ll be ready to go tomorrow. CBC/Portobello faced Lucan in Round 5 last year losing by 4-16 to 3-07.

Junior B Champions St. Vincents C start life in Inter 2 with a tasty tie against Naonk Olaf tomorrow afternoon. Olafs only picked up one win in the competition last year and lost to CBC by 2 points in the Shield final. They’ll be welcome opponents for Vincents to start off the season.

* Please note the game between Kilmacud Crokes B and Ballinteer St. Johns B will take place on Tuesday, August 16th.

Join us tomorrow and Monday to keep up to date on all the Dublin Adult Camogie Championship action. We’ll keep you up to speed on all results on socials as we get them.

DUBLIN U16 CAMOGIE PANEL FOR THE 2017 SEASON IS ANNOUNCED