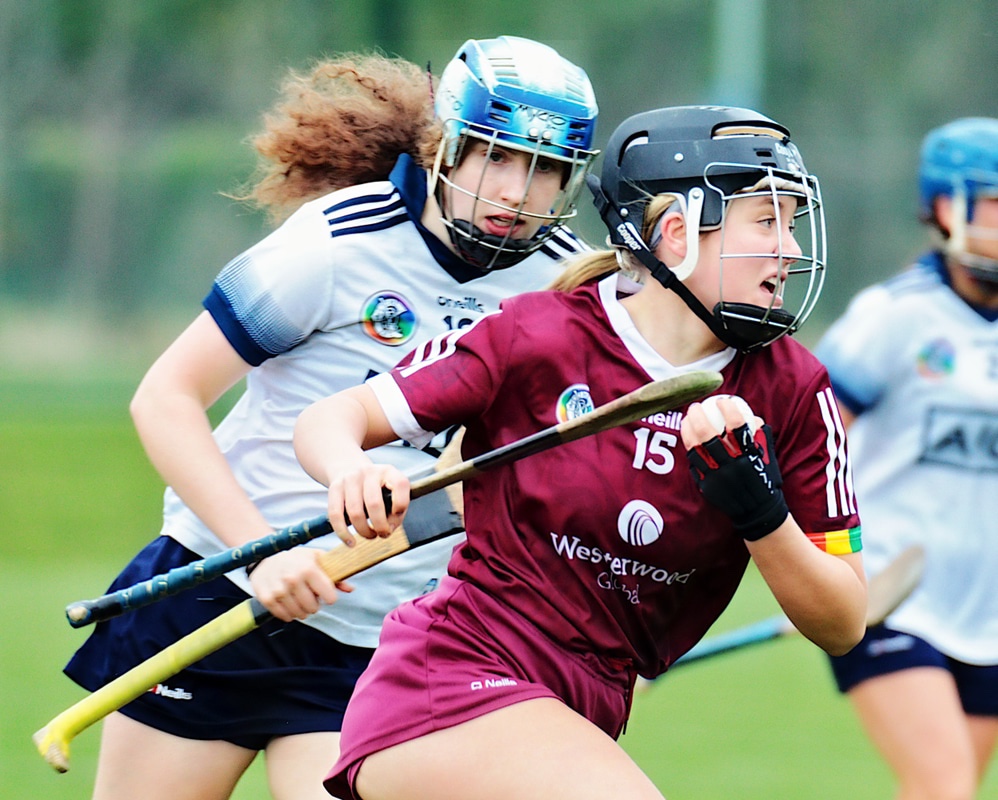 The Galway minors outclassed Dublin today to send the young Dubs out of the Tesco Ireland All Ireland Minor Camogie Championship.

Galway hit the ground running this afternoon in Abbotstown to build up an early lead that they never relinquished and pulled away in the second half to claim a well deserved win.

Dublin Senior hurling manager Mattie Kenny was in attendance to watch his daughter Hayley who played at corner-back for Galway.

The young Dublin team battled hard throughout the contest but they found it difficult to get the ball to stick up front against a well organised Galway defence leaving them with minimum scoring opportunities.

Trailing by seven points four minutes into tue second half Dublin gave themselves a glimmer of a chance of getting something out of the game with a goal from Ashling Nyham, but Galway outscored John O’Connell’s side by 1-07 to 0-02 to run out comfortable winners in the end.

In blustery conditions it took both sides a few minutes to settle into the game. Galway grabbed the first score of the contest in the seventh minute with a converted free from Catherine Hanley.

Galway quickly increased that lead to four with points from Olwen Rabbitte, Niamh McInerney and Ciara Hickey. Sixteen minutes in and Dublin finally got of the mark with Leonie Power swinging over a free.

The sides then exchanged a pair of converted frees each, Cathrine Hanley with two fro Galway and Sinead Daly replying with two for Dublin.

It looked like the sides would go into the break with just three points between the teams but Galway grabbed two late points from a Catherine Hanley free and a fine point from play from Orla Mullins to lead by five with the half-time score 0-08 to 0-03.

Galway extended their lead to seven inside the opening three minutes of the second half with a 45’ from Catherine Hanley and a point from play by Niamh McInerney.

Dublin threw themselves a glimmer of hope of getting back into the game in the 34th minute with Ashling Nyham finishing the ball to the net after some nic build-up play from midfielder Hannah Gibbs.

But it was all Galway after that, a point from Aoibheann Barry and two from Niamh McInerney restored the Tribeswomen seven point advantage.

A converted free from Sinead Daly momentarily halted the Galway minors scoring spree, but a point from Aisling Dillon was quickly followed by a goal from Aoibheann Barry to all but wrap up the game.

Ciara Hickey and Barry added further points as Galway continued to disappear over the horizon. With five minutes left on the clock Sinead Daly converted another Dublin free but Galway’s Ciara Hickey swung over a free to end the scoring.

There was one piece of drama left before the final whistle with Dublin awarded a penalty for a foul in the box on Sinead Daly.

After some treatment from the physio Daly dusted herself down to take the penalty but her well struck shot was saved by the Galway keeper Laura Feeney and the final whistle sounded as the ball was cleared.