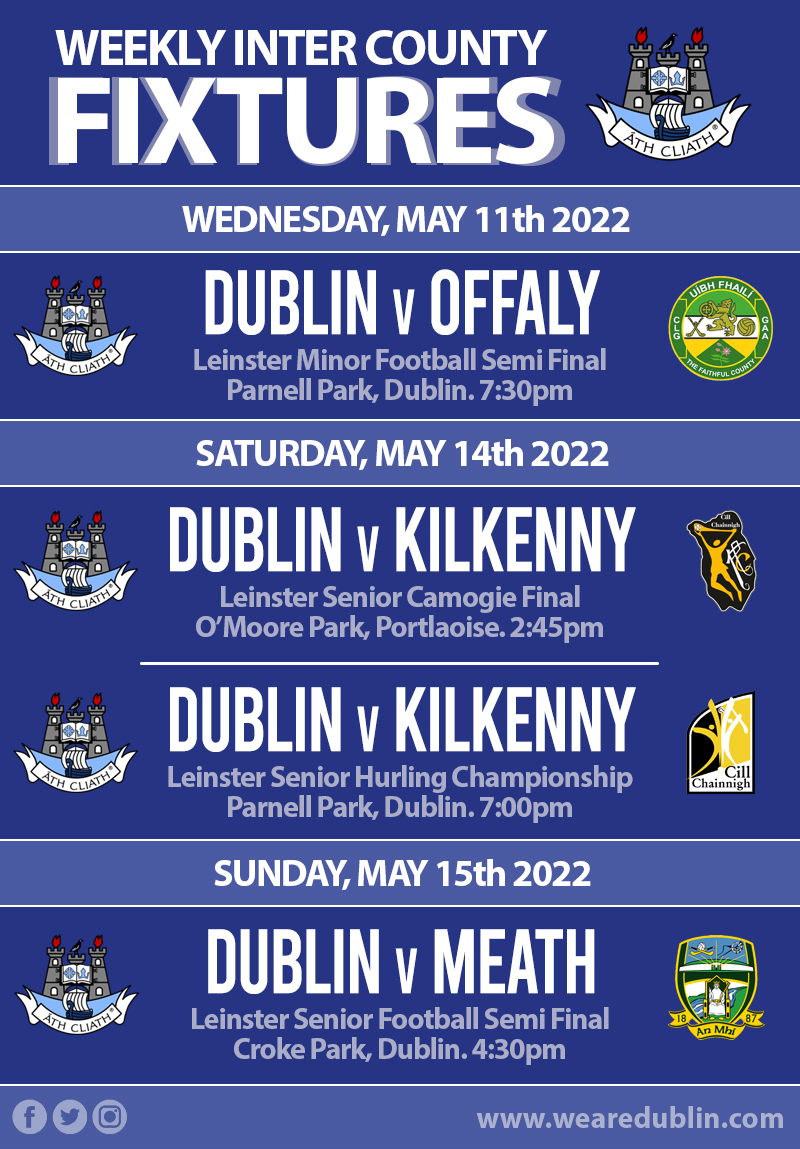 After last weekend, we continue whittling down inter county teams with fixtures remaining in Leinster Championships. In the knockout competitions we sadly said goodbye to our Minor Hurlers beaten by Offaly in their Semi Final, and the Dublin Inter Camogie Panel lost out on a provincial decider losing to Kildare. The good news of course is our U16 Ladies Panel were crowned Leinster Champions. The Senior Camogie panel booked their place in this year’s provincial decider. And despite losing to Meath, Dublin’s Senior Ladies Football panel are still in the hunt for a Leinster Crown. Let’s take a look at this week’s fixtures.

Having won all three of their round robin games so far in the Leinster Minor Football Championship, Dublin must feel confident ahead of this week’s Provincial Semi Final. Add the fact that they’ll have home advantage tomorrow night over Offaly, the mood in the camp must be confident.

The Minor’s are three for three, beating Louth by 5-14 to 1-01, Laois by 2-15 to 0-04 and Westmeath by 2-14 to 0-11. Offaly lost to Kildare in Round 1, narrowly beat Meath in the second, and lost to Longford in the final round. Despite that, it put the Faithful county into a playoff against Carlow which they won, and followed that with a 2-20 to 1-06 Quarter Final win over Laois to reach tomorrow’s Semi Final.

It’s a huge occasion for Adrian O’Sullivan’s Senior Camogie Panel and great preperation for the All Ireland Series ahead. This past Saturday, Dublin put in one of their best performances, easily despatching Westmeath by 1-15 to 0-04. They face a tough challenge in Kilkenny this Saturday, but the recent Semi Final result will have certainly given them a massive boost of confidence.

Inspired by 2022 Senior newcomer Aisling O’Neill, Dublin bossed proceedings from the opening throw in and never gave Westmeath a chance to settle into any groove. When O’Neill hit the net to raise a green flag 10 minutes into the game, the tone was set for what would be a dominant performance.

Kilkenny also come into Saturday’s game confident from their 4-14 to 1-12 victory over Offaly. And in such a short competition, there’s no way of telling how this game will go. Dublin will leave nothing behind, with absolutely nothing to lose.

They’ve toughed it out to date, but there’s no doubt this Saturday should pose as Dublin’s toughest test in this year’s Leinster Senior Hurling Championship. It’s also an opportunity however to establish some breathing space before the final round in Salthill.

Mattie Kenny’s panel have beaten Laois, Wexford and Westmeathin their fixtures to date. Against Laois and Westmeath they certainly had opportunities to work on their score advantage, and they’d be disappointed not racking up some good points. But the reality is, the Dubs are top of the Leinster Championship table, one point ahead of Galway. Kilkenny will feel wounded having lost to Galway in the last round, and they’ll want to claw back some ground before welcoming Wexford in the final round.

There’s opportunities for any of the top four in the competition to reach the provincial decider and there’s a very good chance this will go down to the wire. For Mattie Kenny, Saturday is a chance to restore the damage done by Kilkenny in Parnell Park back in teh National League.

The league campaign is now a distant memory. And supporters can take confidence in Dublin’s opening Leinster Football Championship outing against Wexford. Last year at Chadwicks Wexford Park, Dublin only managed a 0-15 to 0-07 win in a more than laboured performance.

This time around there was a return to the assured confident attacking Dublin we’ve come to know and love. Dessie Farrell’s men were certainly as focused as they’ve been all year. And the 1-24 to 0-04 was the perfect reflection of the performance.

A returning Con O’Callaghan once again turned on a charm that was sorely missed during the National League, with Brian Fenton leading from the middle of the park, leaving Wexford no chance of mounting a proper challenge.

Meath arrive this weekend after a 4-13 to 1-12 win over Wicklow in their Quarter Final. It was this juncture last year when these 2 sides met, with the outcome being 2-16 to 1-13 in Dublin’s favour. Dublin will want to build on the momentum created against Wexford, and it’s Meath’s job to break that down.

And that’s you all up to speed on this week’s fixtures. Stay tuned throughout the week for more team news and announcements.