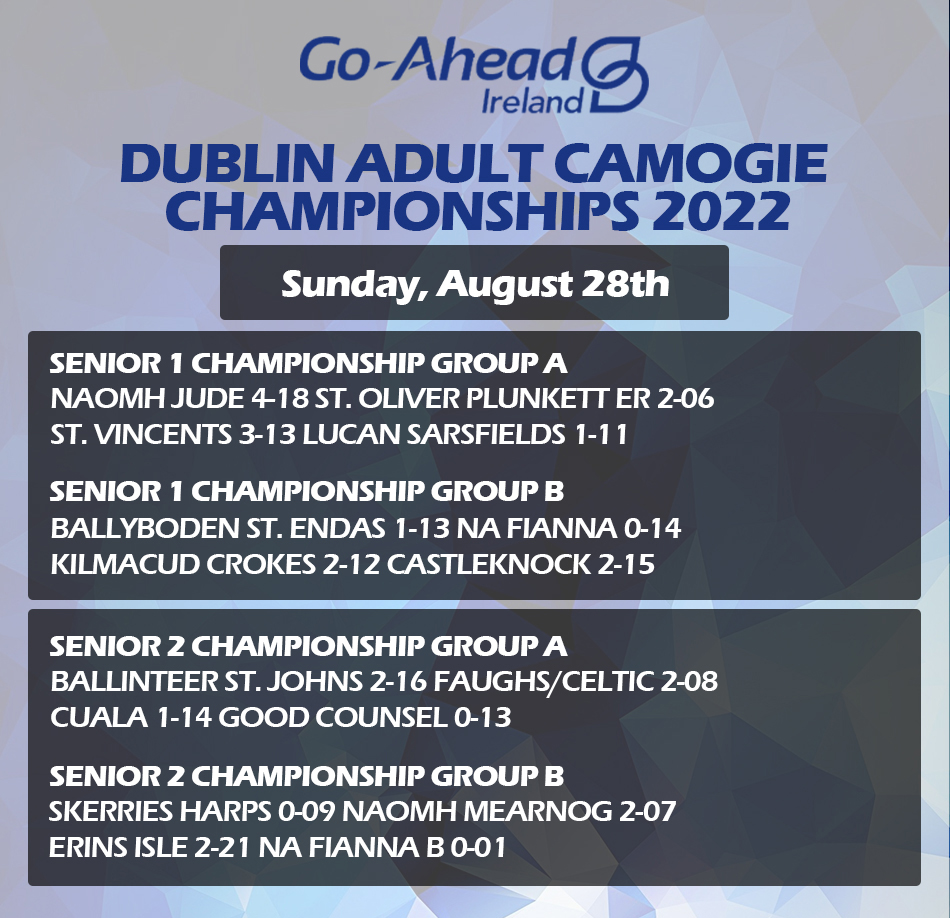 Two rounds down and one to go in this year’s Go Ahead Dublin Senior and Inter Camogie Championship. The knockout phases are beginning to take shape. But we’re not quite there just yet. And there could be some upsets in the last round of action. Here’s a wrap up on the action from earlier today.

St. Vincents have a 1 point advantage over Naomh Jude in the Group A table after a second vivtory in the Senior 1 Championship. They consigned Lucan Sarsfields to a defeat yesterday on a 3-13 to 1-11 scoreline. It means Vincents will defiinitely see Semi Final action in the Senior 1 Championship with the second qualifying slot going to either Lucan or Judes. Judes were 4-18 to 2-06 winners over St. Oliver Plunkett Eoghan Ruadh this morning. And after drawing in the opening round to Lucan it leaves them needing a win or draw against Vincents in the final round. Lucan must beat Plunketts to stay in the hunt and will be hoping the result in the other game goes in their favour.

In Group B Castleknock once again secured a win in their 2-15 to 2-12 victory over Kilmacud Crokes. That secure a last four berth for the Senior 1 newcomers who musy be beside themselves in their debut at the top level. Castleknock will face Na Fianna in the final round hoping for a clean sweep. But a Fianna might have other ideas. Despite losing to Ballyboden St. Endas today the Mobhi Road girls can still carve a path to the semis. They’ll be challenging for a win in the final round and hoping that Ballyboden, who were 1-13 to 0-14 winners today, come up short against Kilmacud Crokes in 2 weeks time.

Ballinteer St. Johns edge Cuala at the top of the Group A table by a single point after they secured a second round win over Faughs/Celtic this morning. Faughs will be disappointed after drawing with Cuala in the first round to have suffered the 2-16 to 2-08 loss today. But they’ll be hoping to get one final clout at a semi final spot facing Good Counsel in 2 weeks time. Good Counsel suffered a second defeat with Cuala the winners this morning by 1-14 to 0-13. There’s a huge Round 3 game between Cuala and Ballinteer, but Faughs could still scapre a knockout slot delending on that result and their own.

In Group B Naomh Mearnog are two for two after their 2-07 to 0-09 victory over Skerries Harps today and they should see themselves into a semi final. Skerries are not out of the race just yet having beaten Na Fianna B in Round 1. But with Erins Isle beating Na Fianna by 2-21 to 0-01 it will mean the final round games are massively important to the top 3 teams in the group. And it’s between Isles and Skerries to decide the second qualifier from Group B. 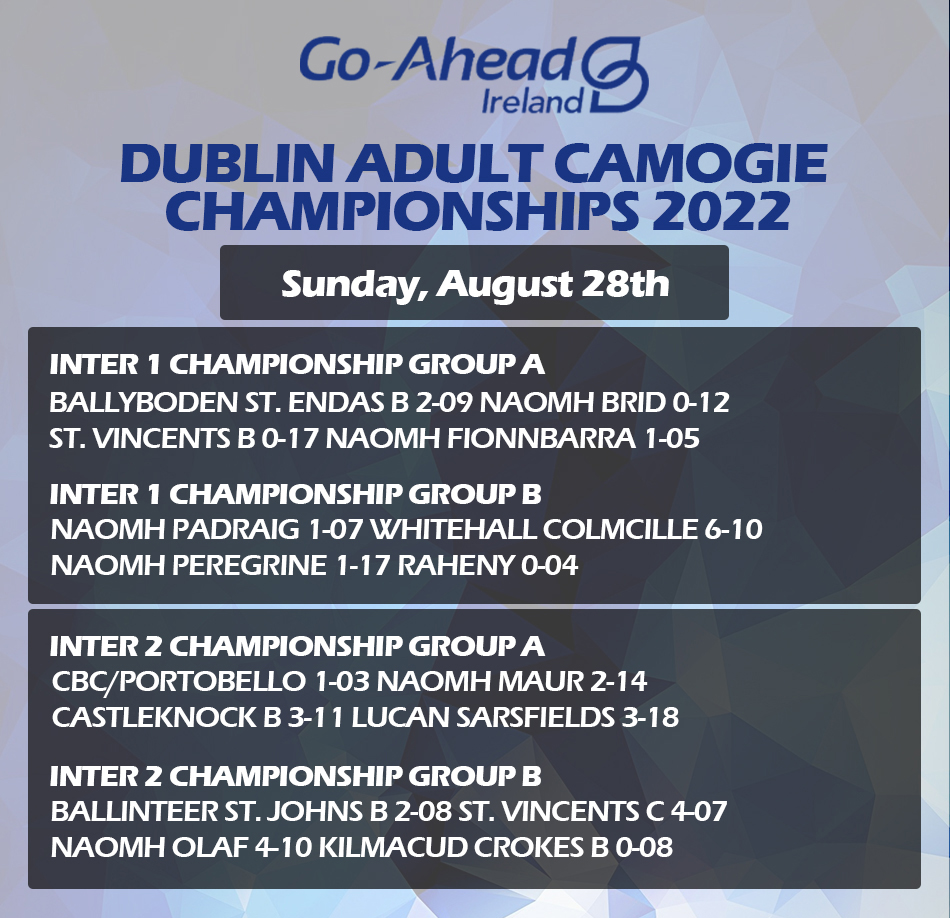 St. Vincents B abd Ballyboden St. Endas B are locked on 4 points each at the top of Group A in the Inter 1 Camogie Championship after 2 consecutive each. Ballyboden secured a 2-09 to 0-12 win over Naomh Brid, with Vincents beating Naomh Fionnbarra by 0-17 to 1-05. It means both sides will davance to the Semi Finals, but they’ll need to face each other in Round 3 to decide the final placings. For Brigids and Finbarrs they’ll square off after two defeats each, with both hoping to not be holding up the bottom of the Group A table.

In Group B Naomh Peregrine all but secure their path to the knockout after their 1-17 to 0-04 win over Raheny. But Raheny are not out just yet. Beating naomh Padraig in the opening round sees them on 2 points alongside Whitehall Colmcille. Colmcille recovered from their narrow defeat to Peregrines in Round 1 to take a comfortable 6-10 to 1-07 win away from today’s game with Pats. They will square off against Raheny next week with the winners securing their semi final slot.

Lucan Sarsfields B and Naomh Maur will take the Semi Final slots in Group A of the Inter 2 Camogie Championship after both securing two consecutive wins. They’ll meet in Roudn 3 to decide their finishing positions. Maurs registered a 14 point win over CBC/Portobello earlier today on a 2-14 to 1-03 scoreline. Lucan registered a 3-18 to 3-11 win over Castleknock B to guarantee their participation in the Semi Finals.CBC and Castleknock will square off in the final round.

In Group B St. Vincents C are two for two after beating Ballinteer St. Johns B by 4-07 to 2-08. They’ll face Kilmacud Crokes B in the final round knowing they should have a slot in the last four. The other slot will be decided by Naomh Olaf and Ballinteer. Olafs were 4-10 to 0-08 winners against Crokes this afternoon to put themselves in the hunt.

Round 3 of all these competitions will be played on September 11th with plenty of knockout slots up for grabs. We’re already looking forward to what will be a bumper Sunday in 2 weeks time. Make sure you join us.