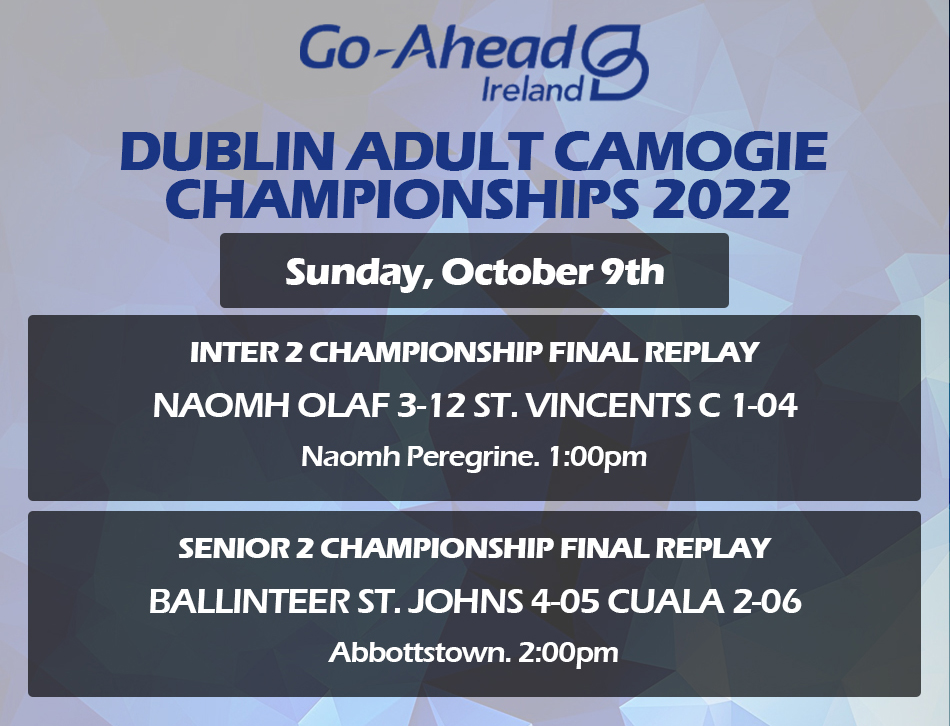 After two very entertaining drawn games last week in both the Senior 2 and Inter 2 Camogie Championship deciders, we finally saw champions crowned in both replays today. And its a huge congratulations to both Naomh Olaf and Ballinteer St. Johns.

Naomh Peregrine hosted the first of the 2 replays this afternoon where Naomh Olaf and St. Vincents C battled it out again. Nothing could seperate the sides last week in the 1-06 to 0-09 drawn game but this week was a lot different. At half time there wasn’t much to report and it did appear like quite the stalemate with Olafs only leading by a single point on a 1-03 to 0-04 scoreline. But on the restart Olafs applied themselves further registering a second half tally of 2-09, with Vincents only managing a goal in the second half with around 10 minutes to spare. And with a 14 point advantage there was no doubt Naomh Olaf were worthy Inter Camogie Championship winners at the second time of asking.

Over at the National Sports Campus in Abbottstown Ballinteer St. Johns got the job done in the Senior 2 Camogie Championship replay, beating Cuala by 4-05 to 2-06, a very different scoreline to a week ago. Cuala fought back last week to force a 2-17 to 3-14 draw an earn another shot at the Senior 2 silverware. Ballinteer took a 5-06 to 2-10 win in the final round in the Group A section of the competition. Last week they couldn’t be seperated. And today it was Ballinteer who had studied their opponents better ahead of this decider.

It looked as though we were in for aonther tight tussle with only a score seperating the sides at the half time break. Ballinteer had the slender 2-04 to 2-03 advantage on the restart and they added another 2-01 to their tally. Cuala sadly only mustered 0-03 to leave them on 2-06 at full time which wasn’t enough. So it’s a huge congratulations to Ballinteer St. Johns crowned this year’s Dublin Senior 2 Camogie Champions.